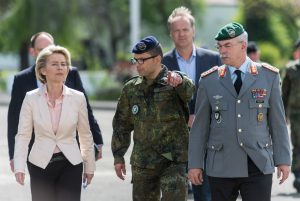 The bizarre case of a racist soldier [lieutenant] allegedly plotting an attack while posing as a Syrian refugee as well as several abuse scandals have sparked a war of words between Germany’s defence minister and the military.

It is a dangerous political battle for Ursula von der Leyen, the first woman in charge of the armed forces, who is often mentioned as a potential successor to Chancellor Angela Merkel.

The mother-of-seven has sternly criticised military “attitude and leadership problems”, highlighted by the case of the soldier and by recent sexual abuse and hazing scandals.

This, in turn, has made her a target of chastened rank-and-file soldiers who charge she is tarring them all while dodging personal responsibility after more than three years on the job.

The escalating conflict started with the arrest a week ago of 28-year-old army lieutenant Franco Albrecht, who was stationed at a Franco-German base near Strasbourg. He came to the notice of the authorities after Austrian police caught him with a loaded handgun at the Vienna airport in February.

The subsequent investigation found that, amid Germany’s 2015 mass influx of refugees, he had created a fake identity as a Damascus fruit seller called “David Benjamin”. Incredibly, the German who speaks no Arabic managed to gain political asylum, a spot in a refugee shelter and monthly state benefits for his fictitious alter ego.

Prosecutors charge that Albrecht harboured far-right views and, with at least one co-conspirator, plotted an attack with the apparent aim of discrediting foreigners. Media reports say he kept “death lists” with the names of top politicians, including former president Joachim Gauck, some cabinet ministers and left-leaning, anti-fascist MPs. It has since emerged that the lieutenant had expressed right-wing extremist views in a master’s thesis he submitted in 2014, in which he theorised about the end of Western civilisation through immigration.

In the paper seen by AFP, he argued that immigration was causing a “genocide” in western Europe, adding that “this is a mathematical certainty”. However, the paper was buried, without disciplinary action — something the minister attributed to a “misunderstood esprit de corps” and superior officers who “looked the other way”.

On Wednesday, von der Leyen — who cancelled a scheduled U.S. trip to deal with the widening scandal — visited Albrecht’s base in France. She angrily denounced the fact that Wehrmacht memorabilia was displayed in a common room there, emphasising that the World War II-era German army “has nothing in common” with today’s Bundeswehr. The minister has also pointed to other recent scandals — over humiliating and sadistic initiation rituals, and female soldiers being forced to pole-dance.

On Thursday she was set to hold a crisis meeting with 100 generals and admirals, after vowing to “shine a light in the dark places” and predicting that “it’ll be difficult, it’ll be painful, it won’t be pretty”. There could indeed be more unpleasant surprises — the military intelligence service is investigating 280 cases of suspected far-right sympathisers in the forces.

Von der Leyen has weathered several scandals in what is considered a tricky cabinet post, most centred on military equipment problems like ageing transport planes and assault rifles that do not shoot straight. Spiegel Online said that, while earlier problems started before she took the post, she is now “facing criticism like she rarely has before”.

Her comments offended many soldiers who already feel insufficiently appreciated for missions from Afghanistan to Mali in a country which, with its guilt over the Nazi era, still shows little love for the military.

Business daily Handelsblatt noted the seriousness of the affair by pointing out that “ministers usually only cancel foreign trips if they face the threat of a putsch at home”. It said von der Leyen had entered “the danger zone”, adding: “This doesn’t bring her any closer to her big goal of one day succeeding Merkel.”

Numerous Nazi-era military awards, propaganda posters, and steel Wehrmacht helmets have been found at an army barracks in western Germany amid an ongoing investigation into an officer suspected of plotting a false-flag attack, Der Spiegel reports.

The bizarre discovery was made by Defense Ministry investigators in the town of Donaueschingen, which is the home base of the Franco-German brigade’s 292nd infantry battalion, the magazine reports, citing military investigators…

Other related reports:
The new face of the far-right AfD: How far to the right is new co-leader Alice Weidel?, by Melanie Amann and Sven Becker, Spiegel Online International, May 4, 2017

The lead candidate for the Alternative for Germany (AfD) in this fall’s parliamentary elections doesn’t have a resume typical of a right-wing populist. She has worked for Goldman Sachs and lives as an openly gay woman. How will her cosmopolitan background jibe with the party’s nationalist message?

… The weekend before last, Weidel’s ideological flexibility was on clear display once again. Together with senior party official Alexander Gauland, the 38-year-old was nominated as AfD’s co-lead candidate – meaning the two will be the official faces of the party as it heads into federal parliamentary elections in September. The vote is widely expected to see the party land seats in the Bundestag, Germany’s parliament, for the first time since its founding as a right-wing alternative to Chancellor Angela Merkel’s Christian Democrats in 2013.

Sexual assault in the U.S. military has fallen, according to a Pentagon report released on Monday, even though the number of incidents reported by service members hit a record high in 2016.

Service members reported 6,172 cases of sexual assault compared with 6,082 last year, the U.S. Department of Defense said in the annual report. This was a sharp jump from 2012 when 3,604 cases were reported. An anonymous survey found that 14,900 service members experienced some kind of sexual assault in 2016, from groping to rape, down from 20,300 in 2014, the report showed. The survey portion is conducted every two years…

Canada’s military forcing out 77 members for sexual misconduct, by The Canadian Press, April  28, 2017