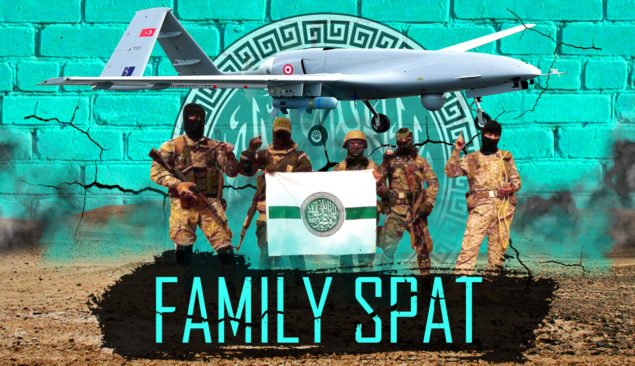 Tensions between Idlib militants and their Turkish sponsors and protectors have been growing since the last weekend.

Early on April 27, the Israeli Air Force carried out a series of airstrikes on alleged Iranian targets in the countryside of Damascus. As always, pro-Israeli sources claimed that the missile attack hit and destroyed weapon depots and HQs of Hezbollah and Iranian forces. Syrian state media reported that 3 civilians were killed and 4 others wounded in the villages of Hujaira and Adliya as a result of the strike.

Tensions between Idlib militants and their Turkish sponsors and protectors have been growing since the last weekend.

On April 26, the Turkish Army clashed with Idlib radicals near their camp blocking the M4 highway near the town of Nayrab. At least 7 people were killed or injured, when Turkish forces opened fire at protesters blocking their column in the area.

According to pro-militant sources, Turkish troops tried to remove the protest camp from the area in order to expand the chunk of the highway used for joint patrols with the Russian Military Police. Another reason is the hostile posture of Idlib protesters towards Turkish troops deployed in the de-escalation area. Earlier in April, Hayat Tahrir al-Sham militants deployed at the highway and recorded a video threatening to behead Turkish soldiers. Ankara likely opted to give a lesson to its restive proxies.

However, the situation went out of control.

In response to Turkish actions, militants shelled Turkish MRAPs moving near Nayrab with heavy machine guns and reportedly launched anti-tank guided missiles (ATGMs) at a bulldozer and a battle tank of the Turkish Army. The impact of the ATGM strikes remains unclear.

These clashes became a visual demonstration that Idlib terrorists remain terrorists and are not ready to abandon their radical ideology and make concessions needed to propel Turkish interests. Hayat Tahrir al-Sham and other al-Qaeda-linked groups receive funding, weapons and even direct military support, but put their own goals and plans first. So, all the while Turkey is pouring money and resources into the al-Qaeda-infested black hole.

The lack of loyalty among Idlib groups forces Turkey to extensively use its own troops to keep at least a semblance of control over the situation. Since the establishment of the new ceasefire regime in Idlib on March 5, the Turkish military has reportedly sent 2,810 military and logistical vehicles to the region. Pro-militant sources claim that approximately 10,000 Turkish troops are deployed in Greater Idlib.

The Syrian Army and security forces are conducting an extensive security operation in the province of al-Suwayda.

Government forces neutralized a criminal gang in the town of Salkhad seizing a large number of fire arms, ammunition, hand grenades and improvised explosive devices. Despite this, the gang leader, Nawras al-Eid, was able to flee. Pro-government sources claim that some local armed groups posing as the local self-defense forces are in fact criminal organizations.

The relative stabilization of the situation in southern and central Syria allowed the Damascus government to allocate additional resources to combat this organized crime. Nonetheless, if large-scale military hostilities once again resume in western or northeastern Syria, organized crime will have another chance to lift up its head in the relatively calm areas.