The false friends of the Ukrainian people

UKRAINE – Ukrainian president Poroshenko is a grateful man. However, his gratitude doesn’t extend to the people of Ukraine who elected him in 2014, on a platform of better living standards and more security. No, he’s grateful to the foreign governments that supported him then and continue to do so. 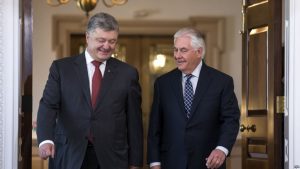 Poroshenko has voiced many words of gratitude to foreign governments. Sometimes, there is much humor in his international courtesies showing his appreciation. Like his performance during a visit to Australia in December 2014. He stopped and bowed to a military guard of honor before entering the Australian Parliament.

His speeches are constructed in the vein of Middle Eastern poetry, often redundant, with adjectives that pile on top of one another, making Ukrainians laugh. Discussing the issue of war and peace during his visit to Japan in April 2016, he called Ukraine to be a “champion in terms of the [Minsk-2] ceasefire regime and the withdrawal of heavy military equipment”. In a September 2015 interview with Deutsche Welle, Poroshenko compared himself with Che Guevara and complained that his (Poroshenko’s) situation is even more difficult. His speeches look so goofy, and the desire to be friends with the West against Russia is so annoying, that it causes his western counterparts to respond in sarcastic remarks.

In December 2015, former U.S. Vice President Joe Biden complained about the needy Poroshenko. Biden said he spoke on the phone with the Ukrainian president more often than he spoke with his own wife.

Poroshenko’s most recent uncomfortable moment came in March 2017 when President Trump made a last-minute postponement of a planned meeting with Poroshenko, placing his Ukrainian colleague—who had already announced the meeting before his trip to Washington —in an uncomfortable position. When the two presidents finally met in July, their conversation lasted only 15 minutes. But it gave Ukrainian mainstream media (often belonging to Poroshenko personally) an opportunity to eulogize endlessly their patron.

Sometimes, however, Poroshenko’s grateful banter is not benign. During his speeches welcoming US State Secretary Rex Tillerson to Kiev last month, he repeatedly thanked the State Department for appointing Kurt Volker as the US Representative for Ukraine. This made people in Ukraine to joke that Volker is a Western-appointed governor of Ukraine. Poroshenko’s redundant expression of gratitude to Tillerson was a clear sign of his personal interest in the appointment of Volker.

Poroshenko’s position in Ukrainian politics is clearly rather perilous. This is clear not only from his low popularity ratings–less than ten per cent according to polls–but also due to the way he has constructed a balance of power.

Poroshenko’s fragile status has been his own doing in three respects.

One is his inability to confront the civil conflict in the East. Since the successful coup in Ukraine in February 2014, military propaganda in favor of the civil war has replaced discussion of, and attention to, Ukraine’s very deep economic and social crisis. A peaceful outcome to the war thus risks turning people’s attention to the economic problems. But military escalation risks further political isolation from nervous allies in the West. The European Union, for one, gives the appearance at times of tiring of constantly justifying the actions of its Ukrainian partners.

Two, he succumbs to the extreme right-wing, sometimes at a very high price. For example, the blockade and destruction of railway lines mounted by the extreme-right to block imports of coal and iron ore from Donbass has cost the national budget and Ukrainian industry dearly, including obliging industry to turn to expensive U.S. coal imports. Poroshenko and Prime Minister Groysman complained in May that the blockade is costing the national treasury dearly. They have tried several times to use the police to end it. But they are politically as well as militarily captive to the extreme-right paramilitaries. Their weakness does not go unnoticed.

Three, Poroshenko is a political pushover in other ways, too. He allows politicians to push agendas as long as they don’t interfere with his own. But he will personally attack politicians if his agenda is in jeopardy. No matter how close his ties to Maidan allies, an independent political move on their part can turn them into the enemy of the state and a part of ‘Putin’s espionage circle’. Such behavior risks losing political partners and political clout.

In order to avoid a political demise, Poroshenko needs an advocate who will battle for him in the political trenches. He has found such an advocate in the person of Kurt Volker, appointed U.S. ambassador to Ukraine by Secretary of State Rex Tillerson in July 2017. Volker’s appeal is not only the fact that he is an ex-CIA agent and brushes shoulders with political hawks. Since 2013, Volker has been employed as a lobbyist for BGR Group, a lobbying firm based in Washington DC that has represented the interests of Poroshenko’s administration. BGR was founded by ex-governor of Mississippi and Republican Haley Barbour. Its office is located three blocks from the White House.

BGR Group facilitated the meeting between Presidents Poroshenko and Trump in June of this year. Volker, working for BGR at the time, received $400,000 for making the meeting happen. He has already reaped benefits for the Poroshenko administration. After returning stateside from Ukraine’s civil war frontline in July 2017, Volker urged the US congress to grant lethal weapons to Ukraine in order to combat the Donbass rebels, claiming the civil war was not “frozen” but very much alive.

Poroshenko utilizes back-door politics to confront the turmoil in his own country while side-stepping direct responsibility. The stripping of the citizenship of Mikheil Saakashvili in July illuminated a nuanced example of Volker’s political clout. Saakashvili was a staunch ally to George W. Bush and the United States when he was the president of Georgia (2008-2013). Poroshenko granted citizenship to him in 2015 and appointed him ‘governor’ of Odessa and was able to fire him for his rogue ‘anti-corruption’ agenda without suffering any consequence in the U.S.

Volker’s firm place in U.S. politics has kept at bay American politicians sympathetic to Saakashvili. From receiving financial gains for setting up negotiations, to pushing Poroshenko’s political agenda in the U.S. arena, Kurt Volker is still acting as a lobbyist on behalf of the Washington-based lobbyist firm BGR Group. He is helping BGR’s long-term client to rise to the challenge of a difficult situation… but that is not in the best interests of either the Ukrainian or American peoples.

Julia Rozenblat is a writer and political rights activist in Ukraine.