Eyewitness: Standing with the mothers in Odessa

ODESSA, Ukraine – Many feared that there would be more violence in Odessa, Ukraine yesterday similar to what took well over 50 lives on May 2, 2014.  But in fact, the day was peaceful when up to 10,000 people gathered near the Trades Union Hall to place flowers and stand with the Mothers Committee in a make shift memorial. 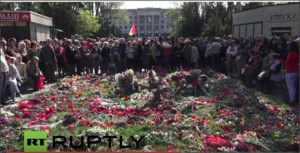 Commemoration ceremony on May 2, 2016 of Odessa Massacre two years earlier. In background is House of Trade Unions where arson massacre occurred

The public was blocked from having direct contact with the Trades Hall by huge numbers of local police, national security services and fully armed neo-Nazi Azov battalion members who have been incorporated into the newly formed ‘National Guard’ in Ukraine (equipped and trained by U.S. Special Forces troops at a base in western Ukraine).

The morning began with a surprise outside our hotel window when we noticed that six buses full of Army personnel were using the spot as a staging area for the day’s events. After breakfast, we joined a group of international, alternative media people who were taken on a walk through this beautiful city to a park where another right-wing group, Right Sector (Pravy Sector), was holding a small protest.  They chanted some of their usual nationalist slogans but were nearly outnumbered by the media people filming their every move.

A brief video of the commemoration ceremony featuring the mothers of the victims of the right-wing violence of May 2, 2014 can be viewed here.

RT Ruptly broadcasts three hours of video of the May 2, 2016 commemoration ceremony in Odessa, Ukraine here.

I was taken by the feeling that the public seemed to be going about their normal Monday activities on this sunny but breezy day almost as if nothing was happening in a nearby part of town.

We next walked to the Trades Union Hall and as we approached, I was overwhelmed by the huge numbers of people holding flowers heading toward the now sacred site. But we couldn’t actually get onto what is known as Kulikovo Square that fronts the Trades Hall. The entire area was sealed off and behind the plastic crime scene string of red tape were heavily armed Azov battalion members. The irony is that the neo-Nazis were now guarding the very grounds were those of their political ideology had committed the unpunished crimes of May 2, 2014. The people, including the mothers of the dead, were not allowed to lay their flowers at the scene of the crime.

Instead, what turned out to be several thousand people crowded into a tight space with the Trades Hall looming just a couple hundreds yards away – close but ever so far away. The people were solemn and Regis Tremblay and I took the time to do some interviews with various people we met in the crowd including one man named Alexander who told the story of being at the Trades Hall on May 2 while three of his friends were killed. Two died from smoke inhalation inside the burning building and one, who jumped from a first-floor window, was beaten to death with bats by neo-Nazis who had set the building on fire and were picking people off as they tried to escape.

We were taken back to the hotel for an amazing lunch. Just before entering the banquet room a gaggle of what appeared to be politicians came up the stairs to the second floor and made a grand entrance. We learned they were EU politicians who proceeded to go around the room and shake everyone’s hand. They didn’t appear to be very interested in speaking to any of us and once we entered the luncheon we noticed one large empty table that had apparently been reserved for the EU group. But, we later learned, they didn’t want to be too closely associated with all of us – maybe they featured they might piss off the U.S. government.

Several from the Mothers Committee rose in turn and made a toast in memory of those who were killed during the May 2 massacre. After each would finish speaking everyone rose from the dining tables with their wine glass in hand. The food was beyond belief, more than we could ever dream of eating, and before we were able to finish the meal we were given a five minute warning that we were going to return to Kulikovo Square in hopes that we might now be able to actually reach the Trades Hall.

We quickly boarded a bus parked just outside the hotel and drove the short distance toward the Square. Police had blocked roads all around but one of the mothers jumped off the bus and ran across the street and began demanding that the bus full of grieving women be allowed to pass. At last the police agreed and as the bus approached the Square we saw out the right side windows a group of chanting Nazis who, when they realized who was on the bus, threw something that hit a window. Once we arrived at the Square and got off the bus we found another mass of people lined up and they created a path between them that the mothers passed thru with the international guests following closely behind.

As we passed thru this line I saw people weeping and they began chanting and we soon came upon a make shift alter full of flowers and candles. The now famous Trades Hall loomed in the near background. A banner was held up with the photos of those killed and various mothers were handed the microphone to share some words. One woman’s emotion struck me deeply and I recognized the words ‘fascist’ and at the end ‘nyet, nyet, nyet’. They released a bunch of white doves that flew towards the hall and then black balloons were set off into the clear blue sky.Not long after this a couple of Nazis tried to pick a fight with some police but otherwise they were kept at a distance from the mourning crowds. I learned that organizers believe that throughout the day about 10,000 people had come to the Square. The original hope was that at least 3,000 would come. The government worked hard in advance to scare the public away from the event.  Just days before photos were widely spread of military vehicles parked directly in front of the Trades Hall bearing a Nazi insignia used by the Azov battalion. Rather than frighten people this heavy handed tactic likely only made the public even more determined to come to the sight of this unpunished crime.

Despite the Western media calling the people in Odessa and throughout Ukraine opposinge the U.S. puppet regime in Kiev ‘Russian separatists’, the words I’ve repeatedly heard since coming here by organizers to describe themselves is ‘federalists’.

After the U.S.-sponsored coup d’etat in early 2014 in Kiev, one of the first things that the new ‘government’ did was to declare that speaking Russian was illegal in Ukraine. For a high percentage of the people in Ukraine, Russian is their first language – especially those who live in the eastern part of the country near the Russian border. The idea of federalism really means local autonomy – people want to live in a federated Ukraine where locally they would have the power to choose their own language and their own leaders rather than have them appointed by the now totally compromised so-called government in Kiev.

We were actually astounded that the three of us from the U.S. (Phil Wilayto, Regis Tremblay and myself) were ever allowed to enter Ukraine. Four people from France, two from Germany and ten EU parliament members were denied entry to Ukraine in recent days. But yesterday in the huge crowds we saw people holding signs saying they came from Italy, France, Germany, Switzerland, Netherlands, and Israel – in all we heard that people came from more than a dozen countries.

At 10:00 am yesterday, four of the key leaders of the Mothers Committee were ordered to report to the local offices of the SBU (Security Services) where they were detained until just after 9:00 pm. The goal of the government was to destroy the May 2 events planned by the families of the victims. But others from the group stepped into the breach and did their best to organize a powerful event on the fly. And they surely achieved their goal.

It is now up to the rest of us to step up and show our support for the May 2 Mothers Committee. One thing we all can do is sign and share their petition calling for an independent investigation of the crimes at the Trades Union Hall.  You can find it here.

Having spent the last two years following the illegal and immoral US-NATO war on the people in eastern Ukraine, it has been an enormous honor to be here in Odessa. I will continue to do everything I can to help build resistance to what I consider to be the cynical creation of chaos inside Ukraine as a way to draw Russia into a war with the U.S. and NATO. Being here and feeling the heartfelt pleas from the Mothers Committee makes me more determined than ever.