Expulsions and barrings of Russian journalists from Ukraine

The latest expulsion of a Russian journalist from Ukraine took place on July 1. The State Security Service of Ukraine (SBU) detained and deported journalist Aleksandra Cherepnina of Russia’s Channel One. She is barred from re-entry to the country for three years. Below are three news reports on her expulsion. 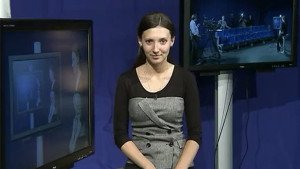 Reporters Without Borders maintains a watch over press freedom in Ukraine. It cites the SBU in reporting that 88 Russian media workers were expelled from Ukraine between April 2014 to February 2015. Accreditation of some 110 Russian language media outlets in Russia and Ukraine has been withdrawn.

Ukrainian as well as Russian journalists are being targeted by the Ukrainian government and its vigilante auxiliaries. The most tragic, recent case was the murder of Oles Buzina in Kyiv on April 16. Among the many cases of detained Ukrainian journalists are Ruslan Kotsaba and Alexander Bondarchyuk.

During the past two years, Ukraine has become one of the most dangerous countries in the world for journalists to work. A report on the year 2014 by Reporters Without Borders lists Ukraine as #3 in journalists killed and #1 for journalists kidnapped.

The State Security Service of Ukraine (SBU) has deported the Russian journalist Aleksandra Cherepnina back to Moscow from Kiev. The correspondent for Russian state broadcaster Channel One was accused of “anti-Ukrainian activities.”

Cherepnina claims that she was manhandled by a pair of officers, taken to a security office, interrogated and accused of producing propaganda. “I asked them to give me a chance to call my office. I took out my phone but they grabbed my arm, both of them held me by the arm. They told me to hand my phone over willingly, I was clearly overpowered. They didn’t let me use it until I was already on the plane to Moscow,” she told reporters upon arrival at Moscow’s Vnukovo airport.

“Twenty minutes ago, she called us onboard a plane bound for Moscow, on which she had been forcibly deported onto by SBU personnel,” the general director of Channel One, Kirill Kleymenov, told the TASS news agency.

The Russian embassy in Kiev told TASS that Cherepnina, who had been in Ukraine since the middle of June, had been deported from the country, following a decision made by Ukrainian government.

The SBU’s press service told RIA Novosti that Cherepnina had been banned for entering Ukraine for the next three years. “It was found out that she tried to film a report, which would discredit the Ukrainian government,” said Elena Gitlyanskaya, the SBU’s press secretary.

Kleymenov said that on Wednesday morning, Cherepnina had been busy getting ready for another report, but she did not contact the office at midday, as had been expected. “After a while, we tried to call her using various telephone numbers, but her telephone was not answering. Knowing of her punctuality and attention to detail, we started to get worried and sent her cameraman to her flat,” the general director of the channel added.

Upon entering the flat, the cameraman noticed that someone had left in a hurry. Her clothes were not in the flat, however, and there were coat hangers littered around.

“Now it is all clear that she had to leave the country unexpectedly. She said that SBU personnel had told her the reason was allegedly falsifying a report about a little girl who threatened “to slaughter Russians,” which appeared on Channel 1 on June 24,” said Kleymenov.

On March 15, Markiyan Lubkivskiy, an adviser to the head of the SBU, said that the agency had expelled or banned from entering Ukraine more than 100 Russian journalists.

Aleksandr Lukashevich, a Russian Foreign Ministry spokesman, said that these developments by the SBU were worrying and were clearly in breach of international regulations.

Russia’s Investigative Committee has opened a criminal case after a journalist from the country’s state-owned Channel One was detained in Ukraine and deported by security services, the committee said in a statement Thursday.

A case has been opened into false imprisonment and obstruction of the lawful professional activity of journalists, the statement said.

Alexandra Cherepnina, a journalist at Russia’s largest television network Channel One, was detained Wednesday in Kiev and then deported back to Russia, where she arrived later the same day. She was also barred from visiting Ukraine for the next three years.

“The fact that Cherepnina was released without charges confirms that her forcible detention and deportation are connected with her writing and telling the truth about events currently happening in Ukraine,” Investigative Committee spokesman Vladimir Markin said.

Markin’s Ukrainian colleagues had a different interpretation of Cherepnina’s work in Ukraine. According to a statement posted by the Security Service of Ukraine (SBU) on its Facebook page Thursday, by deporting the journalist, the agency “has blocked a propaganda campaign conducted by Russian special services.”

Cherepnina was deliberately misinforming the Russian public by describing Ukrainian soldiers as “militants who brainwash children with the aim of popularizing hatred toward Russia,” the SBU said.

The Russian state owns a majority stake in Channel One. Several other Russian journalists have been barred from Ukraine since a bloody conflict broke out in the country’s east last spring between pro-Russian rebels and the central government in Kiev.

The Kremlin calls on all Russian journalists to exercise “extreme caution” while working in Ukraine, Peskov told RIA Novosti.

Russia fumes at expulsion of TV reporter from Ukraine

KIEV: A new public-relations war raged Thursday between Moscow and Kiev after Ukraine deported a reporter with Russia’s Channel One television for allegedly running “destructive” stories about the crisis-torn ex-Soviet state.

Ukraine’s State Security Service (SBU) said it had expelled Alexandra Cherepnina for basing one of her stories on a home video in which a Ukrainian child was shown performing a Nazi salute and wielding a knife while calling for the murder of Russians.

The SBU said Thursday it had decided to “block the destructive actions of Channel One’s journalist” and bar her from re-entering the country for three years.

“Unfortunately, Ukraine has long since turned into a place where it is both hard and dangerous for reporters to work,” spokesman Dmitry Peskov told reporters in Moscow.

“Unfortunately, we are witnessing a complete intolerance for pluralism in Ukraine,” he said.

Channel One has dominated Soviet and Russian airwaves for nearly 80 years. Its popular evening news show Vremya (Time), on which Cherepnina’s report aired, has been the main source of information for many since 1974.

The channel led its Wednesday evening programmes with an 11-minute report about the deportation.

It featured a phone interview with Cherepnina, sent to Kiev on a special assignment, from the plane taking her back to Moscow.

The SBU agents “told me that I could have been the one who shot the (child) video and then presented it as if it was made by someone else,” Cherepnina told the station.

The purported father in the video asks the child one question in Russian and another in Ukrainian — an unusual combination for what Channel One television said was a family of ultranationalists.

Moscow and Kiev have been waging a furious propaganda campaign through their state — and some private — media outlets designed to discredit the other and win over domestic support.

Russian television portrays the leadership that ousted an Kremlin-backed president last year as a “fascist” regime whose rise to power was part of a well-funded US effort to win the allegiance of vital ex-Soviet countries with close Moscow ties.

Kiev and its Western allies fight back with footage purporting to show Russian soldiers and weapons involved in the separatist conflict that has killed 6,500 people in east Ukraine in the past 15 months.

Russia denies any involvement in the war but provides the rebels with humanitarian support and diplomatic backing at frequent UN Security Council debates.