Exports of arms from Canada to Ukraine ‘scary’

By Scott Taylor, published in his weekly column ‘On Target’ in the Chronicle Herald (daily, Halifax, Nova Scotia), Monday, Dec 17, 2017  (with additional analysis further below) 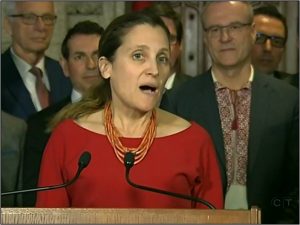 On Dec. 13, Canada quietly undertook the decision to include Ukraine in our Automatic Firearms Country Control List.

With all the news cycles focusing on Donald Trump’s recognition of Jerusalem as Israel’s capital and the ongoing nuclear sabre-rattling between the U.S. and North Korea, this seemingly minor change in Canada’s legislation made barely a ripple on the domestic media front.

The few stories that did appear to have put a very positive spin on things with virtually no context as to what this policy revision will actually mean. In a nutshell, Canada is now authorizing the provision of lethal military aid to Ukraine. One CBC article heralded this as a good-for-business saga under the title “Canada arms makers get OK to sell to Ukraine.” 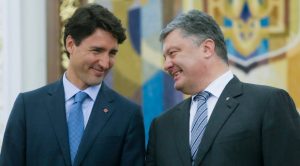 In Kiev, Ukraine President Petro Poroshenko hailed Canada’s decision and welcomed the promise of providing him with additional weaponry. What Poroshenko loves most about Canada’s assistance is the fact that we are giving him and the Kiev regime he represents unconditional support.

This is not the case with those spoilsport Americans who are dangling a whopping $500-million worth of weaponry under Poroshenko’s nose. For some crazy reason, the Pentagon wants to see progress made towards curbing the Ukrainian military’s rampant corruption before they simply hand over a massive arsenal of modern weaponry.

As for Canada’s European NATO allies, despite all of the anti-Russian hype and propaganda centred on the crisis in Ukraine, none of them are following our lead and pouring more weaponry into the region. This is easily understood as no matter where one stands on the issues, this conflict is in their backyard and it behooves no one to reignite what is presently a frozen civil war.

There are presently two self-proclaimed, pro-Russian breakaway republics in eastern Ukraine — Donetsk and Luhansk — that are held by the rebels. Foreign Affairs Minister Chrystia Freeland has made it abundantly clear that Canada regards these illegitimate rebel territories to be in violation of Ukrainian territorial sovereignty.

Therefore, should Poroshenko use the Canadian-provided “defensive weapons” to launch an offensive against Donetsk and Luhansk, he would still be ‘defending’ Ukrainian territory.

Freeland’s partisan fervour in support of Ukraine in this crisis should be tempered with the fact that Poroshenko and his Kiev cabal presently have just a two per cent popular approval rating. Factoring in a minimal margin of polling error, that amounts to about zero, yet Freeland is giving him a 100 per cent vote of confidence, and throwing in an arsenal of deadly weapons to help keep this corrupt oligarch in power.

Since the outset of the military clashes and unrest in Ukraine in 2014, Russian President Vladimir Putin has been labelled by the Western media as an evil provocateur, fighting a proxy war that victimizes Ukrainians. His alleged crimes are the provision of weaponry and instructors into eastern Ukraine to assist the rebel forces.

The question begs: If Putin is guilty of interfering in a foreign civil war, how can Canada not be just as guilty for doing exactly the same thing, albeit for the other side? Not that long ago we prided ourselves as being the world’s peacekeepers, and now we are actually in violation of the internationally brokered Minsk II treaty which prohibits the military escalation in the frozen Ukraine conflict.

Freeland is rushing in where even Donald Trump fears to tread. That is scary.

Scott Taylor is editor of Esprit de Corps magazine where this article also appears, under the headline ‘Canada’s warmongering in Ukraine is dangerous’.

*  Canada’s decision to approve arms sales to Ukraine: What’s the objective, and how does this help achieve it?, by Professor Paul Robinson (University of Ottawa), published on his website Irrussianality, Dec 13, 2017