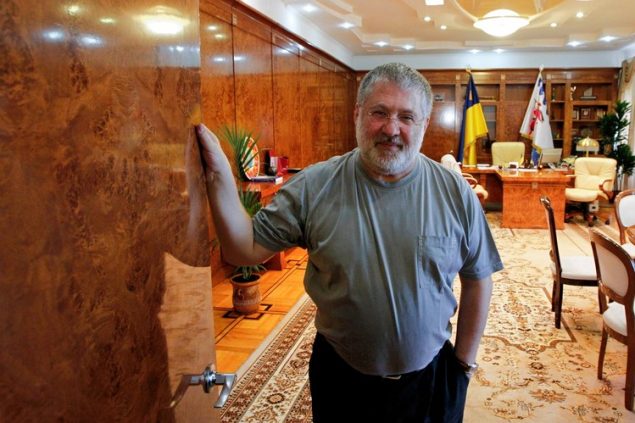 Igor Kolomoisky has returned to Ukraine

On May 16th, Igor Kolomoisky returned to Ukraine. He is the oligarch standing behind Ukrainian elected President Volodymyr Zelensky.

Initially, Mykhailo Tkach, a journalist with RFE/RL’s Skhemy investigative project reported via his Telegram channel that a Privat Group’s airplane Reg. No.UR-PRT arrived in Ukraine at 2:30 on May 16th. Following that, the Babel asked for a comment and Kolomoisky answered that he had, in fact, returned. Asked about what he planned to do in Ukraine he remained mysterious and simply said he didn’t know.

This is the first time Igor Kolomoisky is in Ukraine since June 2017. For a while he lived in Geneva, Switzerland, but then moved to Israel in September 2018, in the city of Herzliya.

In an interview with Skhemy, he said that he moved from Switzerland to another country “because of family circumstances,” and stated that he was planning to return to Ukraine after the first round of the presidential election.

He would only return to Ukraine if Volodymyr Zelensky won the elections, then he said that he would return when he was inaugurated. After his inauguration was confirmed to take place on May 20th it appears that Kolomoisky was prompted to return.

According to a report by RIA, the US strongly recommended that Vladimir Zelensky got rid of the oligarch in his entourage and that only this will help to improve relations between Kiev and Washington.

Even prior to returning Kolomoisky expressed his view on how the Ukrainian government should be set up after Zelensky assumes the presidential seat and possibly disbands the parliament.

He expressed an opinion that Minister of the Interior Arsen Avakov and Secretary of the National Security and Defense Council Oleksandr Turchinov should be left in their posts. Turchinov is a very staunch and open supporter of outgoing president Petro Poroshenko.

Surprisingly, Kolomoisky suggested not dismissing Prosecutor General Yury Lutsenko, who is perceived by Poroshenko’s opponents as one of the most odious representatives of the regime. “My opinion – I would leave him, atleast until the next Parliament sure.”

According to RIA, the advice not to touch the prosecutor may be related to the fact that Lutsenko agreed to cooperate with the US investigation into the Burisma case. The Attorney General is handing in US law enforcement materials on the Burisma case involving persons associated with the US, including former Vice President Joe Biden.

“Zlochevsky (former ecology minister Nikolai Zlochevsky) invited a number of representatives closely associated with US senior management to the company’s board in early 2014. Among them were the Vice President and Secretary of State briefing in Kiev. According to him, the prosecutor’s office has documents confirming “all amounts of payments to these and other persons.”

In addition, Lutsenko stressed that the US Ambassador in Kiev Marie Yovanovitch was providing incorrect information to Washington. Therefore, the Attorney General spoke with Donald Trump’s lawyer Rudolph Giuliani, “so that the US president has a stable channel of information about Ukraine.”

But Giuliani refused to meet with Zelensky, stating that there are “enemies of Trump and the United States” surrounding the new president.

“The most difficult thing now is an honest and transparent transfer of power to the new president and his ability to fulfill his election promises,” Giuliani instructed Ukrainians. He most notably talked about Kolomoisky and people around him of being against the US.

Igor Guzhva, the editor-in-chief of Strana.ua, sees two reasons for Kolomoisky’s return. “The first is to show that he is on horseback, despite the harsh statements made by Trump’s lawyer. The second is that Ukraine does deport its citizens. And if it comes to a criminal case, then any simple Ukrainian oligarch can always resolve the question in any simple Ukrainian court.”

The oligarch had to leave the country after the authorities nationalized PrivatBank that belonged to him. Reportedly, Zelenskiy plans to offset $2 billion to Kolomoisky due to the PrivatBank nationalization.

Kolomoisky supported the policy of the post-Maidan Kiev – he financed the volunteer battalions, built the hierarchy of power. He actively promoted the idea of ​​a “socially responsible” oligarchy, claimed to interfere in the affairs of neighboring regions, and even tried to speak in the international arena.

Fully in accordance with the “general line” of Kiev, Kolomoisky denounced Moscow and the leadership of Russia. He generously shared the plans of the Kremlin invented by him.

Russian Vladimir Putin responded to Kolomoisky’s attacks only once. He simply said, regarding Kolomoisky: “What we have here is a unique kind of thug.”

He had to leave Ukraine, since in 2015 Kolomoisky got into a quarrel with Poroshenko. The oligarch tried to disrupt the appointment of a new chairman of the board of Ukrnafta and failed.

Poroshenko expressed dissatisfaction with the behavior of the head of the Dnipropetrovsk region, Kolomoisky.

Kolomoisky was reportedly outraged by the fact that the Ukrainian Parliament deprived him of control over Ukrnafta. So much that he appeared at the headquarters of the enterprise with armed guards, the businessman came into conflict with one of the deputies of the from the parliament and a member of the Petro Poroshenko Bloc.

Then PrivatBank because of “technical failure” blocked the accounts of Poroshenko enterprises.

The reaction followed quickly. The head of the Security Service of Ukraine, Valentin Nalyvaychenko, made a “discovery”: it turns out that officials of the Dnipropetrovsk Regional State Administration support illegal armed groups. And the fighters of these groups attacked law enforcement officers and abducted people.

“We are dealing with an extremely dangerous interregional gang that earned blood cynically hiding behind the certificates of volunteer battalions. We have reasonable evidence that she receives support, and sometimes funding from high-ranking officials of the Dnipropetrovsk regional state administration,” Nalyvaychenko claimed.

Following that, Kolomoisky left politics and Ukraine. It is noteworthy that he owns the 1+1 TV channel, which aired Zelensky’s comedy show, and then backed his presidential campaign.

Kolomoisky always claimed that he had only business relations with Zelensky.

“Regarding Mr. Kolomoisky, I’ll say: all the people who violate the laws, if Kolomoisky is among them, will all go to jail,” Zelensky assured.

After all, Kolomoisky returned on the exact date the inauguration was accepted as May 20th, which surely was not by accident.