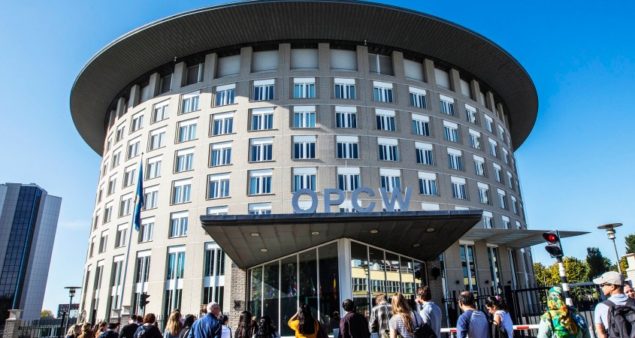 The Organization for the Prohibition of Chemical Weapons has made false and misleading statements about two veteran inspectors who challenged a cover-up of their investigation in Syria, leaked documents show. The inspectors probed an alleged chemical weapons attack in the Syrian city of Douma in April 2018, and later objected when their evidence was suppressed.

Documents obtained by The Grayzone reveal that OPCW leaders have engaged in a pattern of deception that minimized the inspectors’ senior roles in the Douma mission and diminished the prestige they enjoyed within the world’s top chemical weapons watchdog.

OPCW Director General Fernando Arias has claimed that the first inspector, South African chemical engineering and ballistics expert Ian Henderson, “was not a member” of the Douma investigative team and only played a “minor supporting role.”

However, contemporaneous communications from the OPCW’s Douma Fact-Finding Mission (FFM) directly contradict Arias. They show that Henderson was indeed a Douma team member, and that OPCW leadership directed him to lead its most critical inspections. They also show that Arias, rather than acknowledge that Henderson was an FFM member, offered up a false explanation for why Henderson was in Syria at the time of the probe.

Arias has also disingenuously minimized the role of the second inspector, known only to the public as “Inspector B.” This will be examined in part two of this article.

The OPCW’s investigation was triggered when extremist anti-Syrian government militants and Western states accused the Syrian army of dropping gas cylinders on two buildings in Douma, killing dozens of civilians. The U.S., France, and Britain bombed Syrian government targets days later, asserting their right to enforce the chemical weapons “red line.” After a nearly year-long investigation, the OPCW issued a final report in March 2019 that claimed “reasonable grounds” existed to believe that a chlorine attack occurred.

However, a trove of leaked documents has shown that the OPCW leadership suppressed and manipulated evidence that undermined the allegation against the Syrian military. The first of such leaks was an engineering assessment authored by Henderson that concluded that the gas cylinders in Douma were likely “manually placed.”

That conclusion suggested the incident was staged on the ground by the armed militants who controlled Douma at the time. Additional leaks later revealed that Inspector B protested the censorship of critical evidence and toxicology reports, as well as the manipulation of chemical samples and witness statements. Henderson and B also complained that OPCW leaders excluded all of the Douma investigators except for one paramedic from a so-called “core” team that wrote the organization’s final report.

In response to the scandal, OPCW Director General Arias convened an inquiry into the Henderson leak and unveiled its findings in February 2020. In a bid to strip Henderson and Inspector B of credibility, Arias and the inquiry team painted the two as rogue actors with only peripheral roles.

Evidence obtained by The Grayzone reveals that Arias’ characterization of the two inspectors was inaccurate, and contradicted by facts OPCW officials kept private.

Arias and the inquiry team have asserted that Ian Henderson was not an official participant in the Douma investigation. Henderson, they claimed, “was not a member of the FFM” [Fact-Finding Mission], and instead merely “accompanied the FFM to certain sites of interest” in a “minor supporting role.”

An April 2018 letter obtained by The Grayzone shows that while it was headed by Arias’ predecessor, the OPCW’s Office of Director General (ODG) specifically requested that Henderson lead inspections at three high-priority locations in Douma. The letter, an operations communication from OPCW headquarters, instructed the Douma team to visit the two locations where the gas cylinders were found; the hospital where a video was filmed of alleged gas attack victims; and a fourth, redacted location.

“…ODG is happy,” the letter instructed, “if the visits to the cylinders and hospital are led by Ian Henderson.”

Extract from an OPCW communiqué on behalf of the Director General’s Office.

The April 2018 directive by OPCW leadership for Henderson to lead the inspections at three of the investigation’s most critical and sensitive locations was completely at odds with the claims by organization leadership that Henderson merely “accompanied the FFM to certain sites of interest,” and “assisted” in a “minor supporting role.”

The two cylinders were undoubtedly the mission’s most important inspections: it was at these locations that the alleged chemical weapons attack took place, and the cylinders were the alleged means of delivery. The fact that Henderson was tasked with leading the inspection of the alleged crime scene shows that OPCW leaders did not see him as playing a “minor supporting role,” but a major leadership one.

If Henderson was “not a member” of the Douma Fact Finding Mission, as Arias now claims, why did his predecessor’s office specifically request that Henderson lead three inspections at the mission’s most important locations? The answer is that Arias had made another false statement: a second leaked OPCW document from the Douma mission explicitly listed Henderson as an FFM member.

The document obtained by The Grayzone is a sensitive security-planning memorandum, known as a CONOPS (Concept of Operations). It detailed the operational and security arrangements for one of the FFM’s location visits in Douma. On a page outlining the OPCW’s “Mission Personnel” and their roles, Henderson is listed, next to the title, “FFM.” 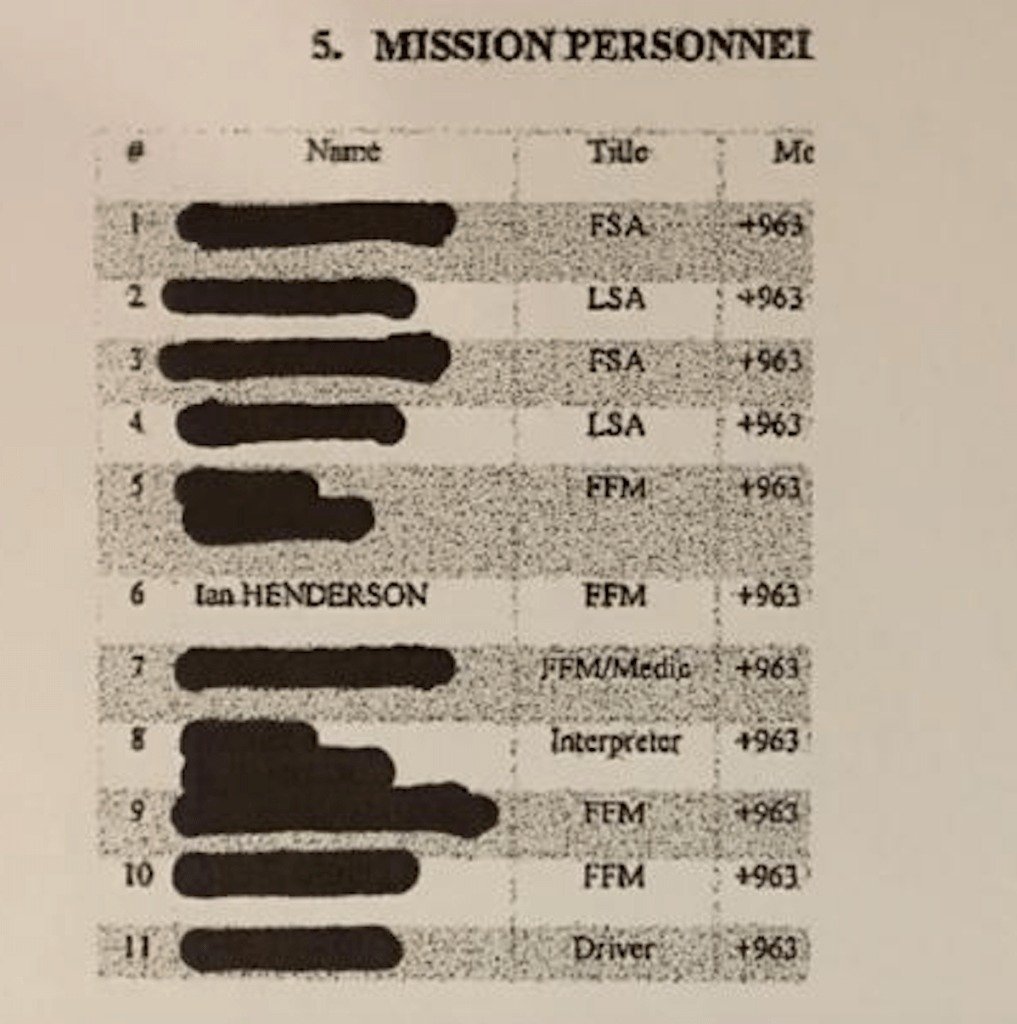 Extract from an OPCW CONOPS document listing Ian Henderson as a member of the FFM in Douma. The Grayzone has viewed the document to confirm its authenticity but is only publishing this extract due to the sensitive nature of the document for UN security operations.

“INSPECTOR HENDERSON, IAN WILL BE PART OF THE TEAM”

In trying to justify his current claim that Henderson was not an FFM member, Arias has adduced the fact that Henderson’s “name is not included in the mandates issued for FFM deployments signed by my predecessor.” But Arias’ account distorts the actual timeline of events and omits other OPCW documents.

As Henderson has previously noted publicly, he was not included in the initial OPCW “mandate,” because at that point he was on a separate mission in Nepal. Upon his return, Henderson was immediately assigned to the FFM team in Douma. The Syrian government was then notified that Henderson was joining the mission – a communication that Arias has conveniently ignored.

The Grayzone has obtained an “F038” notification document advising the Syrian government that Henderson is joining the Douma mission as a member of the FFM team. “PLEASE NOTE THAT INSPECTOR HENDERSON, IAN WILL BE PART OF THE TEAM CONDUCTING THE TECHNICAL SECRETARIAT VISITS,” the communiqué reads. Henderson is also listed as the newly added member of a 7-person “LIST OF INSPECTORS.” 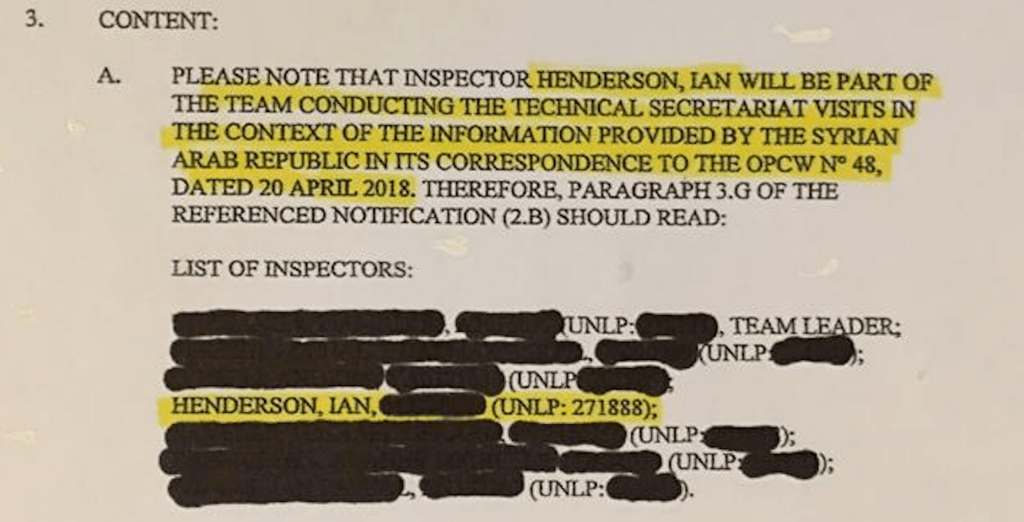 Extract from an OPCW notification to the Syrian government adding Ian Henderson to the FFM team of inspectors in Douma.

The full document can be viewed here.

Why Henderson was in Douma

Rather than acknowledge the documented fact that Henderson was a member of the FFM tasked with leading some of its most high-priority and sensitive operations, the OPCW has offered an unusual explanation for his presence in Douma.

The OPCW leadership has attributed Henderson’s on-the-ground involvement to happenstance, the result of his already being in Syria anyway. “[Henderson] provided support to the FFM team investigating the Douma incident since he was at the command post in Damascus at the relevant time,” the OPCW’s inquiry stated. [emphasis added]  “It is customary for the inspector serving at the command post to provide assistance to the FFM.”

But an OPCW document obtained by The Grayzone shows that Henderson only took over the Damascus command post after the Douma FFM mission had finished its deployment. On May 3rd2018 – two days after Henderson and the FFM wrapped up 10 days of inspections in Douma – the OPCW’s Damascus mission recorded that Henderson had taken control. 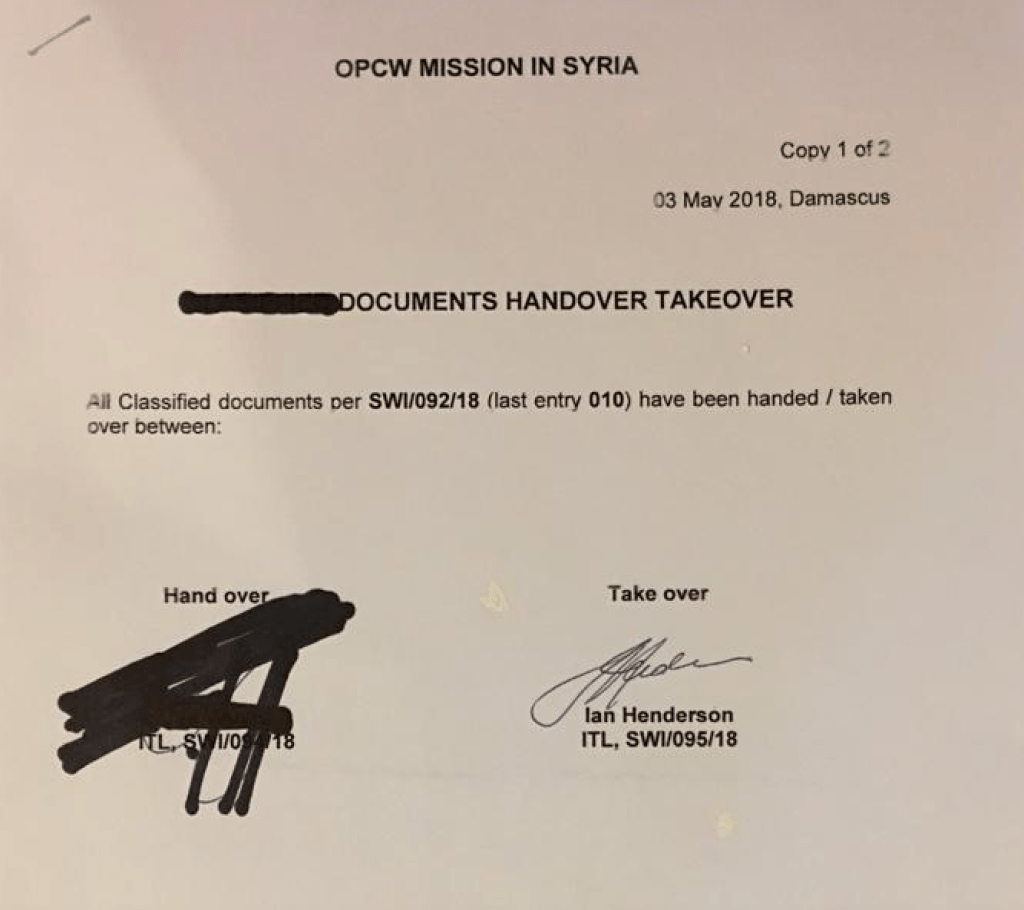 OPCW document acknowledging that Ian Henderson has taken over the OPCW’s Command Post in Damascus on May 3rd – two days after the end of the Douma FFM’s mission.

“Our best ITL… used for the most complex and sensitive missions”

In addition to making false statements about Henderson’s role in the Douma FFM, Arias and the OPCW inquiry have also made several denigrating statements about the inspector’s standing within the organization that omitted important facts.

In a February 2020 letter published by The Grayzone, Henderson confronted Arias for making “underhanded” and “demeaning” comments that falsely minimized his experience and seniority within the OPCW. Henderson served with the organization since its inception, first from June 1997 to December 2005, and then for a second tenure from June 2016 to May 2019.

Arias said that Henderson was “eventually… promoted to Team Leader,” when in fact he was among the first group of Inspection Team Leaders (ITLs) to be appointed at the P-5 level – the OPCW’s most senior designation for an inspector. Arias has also claimed that Henderson “was rehired at a lower level” upon his return in June 2016, when in fact, at that point, the P-5 designation for OPCW ITLs no longer existed due to budgetary decisions.

Annual performance appraisals and letters obtained by The Grayzone also reveal that Henderson was highly regarded within the organization. In 2005, the Director of the OPCW’s Inspectorate Division – which oversees all of the organization’s global inspections – wrote that “in all of Mr. Henderson’s annual appraisal reports” during his OPCW tenure, he had received “the highest rating possible.”

In 2018, an OPCW manager described Henderson as having “a wealth of knowledge,” whose “negotiation talent paired with his technical knowledge and skill make him an asset.” The previous year, a manager lauded Henderson for having “contributed to CBCP [Capacity Building and Contingency Planning Cell] cell achievements significantly.” The manager particularly praised Henderson for “leading and participation” in sensitive contingency operations, including the OPCW’s inspection of Syria’s Scientific Studies and Research Center (SSRC) in 2017.

In his letter to Arias, Henderson invoked his and Inspector B’s lengthy, celebrated tenures inside the OPCW. “We are long-serving and dedicated OPCW supporters,” Henderson wrote. “We both have reams of documents such as performance appraisals, emails, letters of commendation and others, that reflect a history of service at the highest level in terms of qualifications, skills, expertise, leadership, integrity and professionalism throughout our time at the OPCW.”

“Does this not place the efforts by some to smear our reputations, on questionable ground?” he continued. “As a manager, as the highest official in the Organisation, does this not lead to the question: Why would a pair of the top Inspection Team Leaders, both with impeccable records… suddenly ‘go rogue’?”