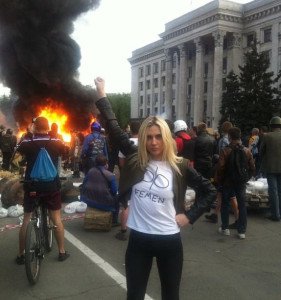 Femen leader Evgeniia Kraizman at the scene of the Odessa Massacre

The Odessa massacre is the other shoe, along with MH17, and the discovery of mass graves proving war crimes in East Ukraine, which is waiting to drop. The facts about these three issues are going to go mainstream, and when they do, support for Kiev, inside and outside Ukraine, is going to evaporate quickly.

RI‘s shocking story from 3 weeks ago, which ID’d a leading right-wing activist brutally clubbing semi-conscious people who had fallen out of a burning building during the massacre, is the most-read story on our site, and the most-watched video on our Youtube channel.  That story, and the two follow-up stories, here and here, got a combined 40,000 views on our site alone, and keep growing.  The number of views on sites which also carried the story probably number in the 100s of 1000s.

In those articles, we urged the mainstream media to follow up on this, because we are just a bunch of volunteers, and they are, well, professional journalists.  Some readers have been writing in, asking if anyone has.  So far: dead silence. But Femen, a radical feminist protest group founded in the Ukraine, keeps getting positive coverage in the West.

So here is some more food for thought for all you inquisitive mainstream journalists out there.

This excellent mini-documentary, done by an American investigative journalist, came out a long time ago, on May 12, just one week after the massacre. It has over 200,000 views on his Youtube channel.  No doubt many journalists covering Ukraine have seen it. Yet still no follow-up stories.

For a lot of people who follow the Ukraine story, this is old news, but we are writing about it because this site is getting a much broader readership than the usual specialist blogs, and many may not be aware of this.

The documentary demonstrates very convincingly, using video from the public domain, that provocateurs organized by the Odessa authorities, dressed to look like pro-Russian demonstrators, fired at the right-wing extremists, in order to incite the riot.