So who, exactly, annexed the Crimean peninsula?

Due to the international media’s continued claims about the “Russian annexation of Crimea”, it’s been difficult for the citizens of the U.S. and Europe to make sense of the details of the peninsula’s recent history. Exactly three years ago, on March 16, 2014, Crimeans were offered a choice: to rejoin Russia or to return to the constitution of 1992 that proclaimed Crimea a legal, democratic, secular state whose relationship with Ukraine was based on bilateral agreements. 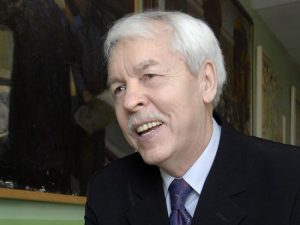 The 1992 constitution was unilaterally abolished by Kiev on March 17, 1995, and here’s what’s surprising: no one at that time in the West demanded that the Ukrainian government stop  violating the provisions of international law and the rights of the inhabitants of the Crimean peninsula. Then in 1995, special ops forces from the Security Service of Ukraine (SBU) and the Armed Forces of Ukraine (ZSU) landed in Crimea and Sevastopol in order to establish “Ukrainian law and order”, seizing the building housing the Supreme Council of the republic, where the administration of the acting president of Crimea, Yuriy Meshkov, was also headquartered, and demanding that he be turned over. Since Meshkov refused to vacate his office, they tried to poison him. Much later, he described how his drink had been poisoned and that later in the hospital he was refused proper medical care. Only an emergency evacuation to Moscow miraculously saved his life. 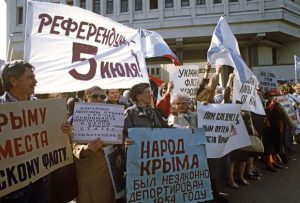 Pro-sovereignty rally in Simferopol, capital city of Crimea, in June 1992

In this manner, the real annexation of Crimea by Ukraine, which no one condemned, was completed in 1995. It all began in 1991 with a power grab by the Ukrainian parliament, which annexed the Crimean Autonomous Soviet Socialist Republic, forcibly joining it to Ukraine despite the results of the January 1991 referendum about reestablishing Crimea’s autonomy. The annexation by Ukraine culminated in the revocation of the constitution and the liquidation of the office of the president of Crimea. However, no one in Europe or America introduced sanctions against this new Ukrainian state that had flagrantly trampled on the right of nations to self-determination: according to the 1989 census, three-quarters of the population of Crimea were not ethnic Ukrainians. 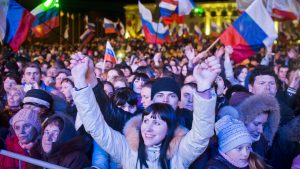 From standpoint of the overwhelming majority of Crimea’s residents, a historical injustice was redressed in March 2014: Ukraine was stripped of what it had obtained illegally between 1991 and 1995 using deception and military force. In the eyes of Crimeans, Ukraine’s claims to the peninsula and the support of those claims by the West look very odd. In the 1990s, the world ‘overlooked’ Ukraine’s annexation of Crimea, and no one was concerned that the rights of the inhabitants of the Crimean Autonomous Soviet Socialist Republic had been violated. But when those citizens again took it into their heads to determine their own destiny in 2014, an international scandal blew up that still burns today.

Furthermore, Ukraine is floating the idea of dragging the peninsula “back” under its jurisdiction, knowing perfectly well that the Crimeans themselves are overwhelmingly and unequivocally opposed to this. It is very strange that over the course of the last three years the international community has not once listened to the voice of this majority. Moreover, international sanctions have not been imposed against Ukraine for its attempts to leave the inhabitants of the peninsula without water or electricity. Kiev has actually been working against the Crimeans, under the slogan: “Crimea will either be Ukrainian or uninhabited!” 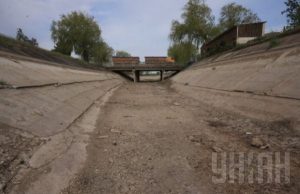 Cutting of water supply in North Crimea Canal by Ukraine in mid-2014. The cut-off was celebrated by Maidan politicians and right-wing media in Ukraine

In 2014, Kiev ordered the North Crimean Canal (built by the USSR between 1961 and 1971) to be cut off, as a result of which the acreage of irrigated land in Crimea declined by 85%. At the end of September 2015, a group of Ukrainian «activists», representing the ultra-right organizations Right Sector and Azov battalion as well as several fugitives from the Mejlis of Crimean Tatar People organized a transportation «blockade of Crimea»: the highways into Crimea were shut down to prevent Ukrainian goods from reaching the peninsula, with the intention of thereby triggering a food shortage and a rise in food prices, due to the complexity and expense of obtaining supplies from mainland Russia by sea, air, or across the Kerch Strait. 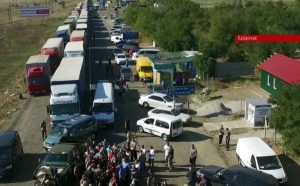 Later, when it turned out that the plan had come to naught and that the «food blockade» had mostly caused harm to small shops owned by Crimean Tatars, the chairman of the Crimean Tatar Mejlis, Refat Chubarov, unexpectedly claimed that the blockade “was instigated by several people, including the leaders of the Mejlis, but it had no connection with the institution of the Mejlis itself.” As a result, Ukrainian businesses, which were deprived of the opportunity to sell food to Crimea, suffered the most from the actions of the “blockaders”. In the peninsular, however, wholesale merchants quickly adapted to obtaining their supplies from Russia, domestic producers got a shot in the arm and traveling markets popped up, offering products from as far away as Belarus.

By late 2015, the sponsors of the “trade blockade” of Crimea realized that they had not achieved their goal: there was no sign of hunger, nor a significant increase in food prices, nor social protests on the peninsula. In addition, many residents of Crimea began to ridicule the blockade on social media, publishing photographs from markets and stores that showed nothing resembling a food shortage, on the contrary they documented that meat, bread, milk, and cereals were easily available and that fish and fruit were in fact abundant. 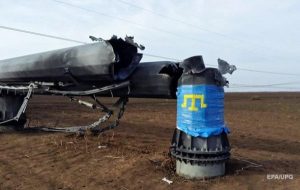 In Nov 2015, right-wing extremists blew up electricity supply from Ukraine to Crimea. No one was ever criminally charged, the supply remains cut

Formally uncontrolled by Kyiv, Crimea Tatar activists led by media owner Lenur Islyamov blew up electricity pylons in the neighboring Kherson region of Ukraine supplying the peninsula. Crimeans were left without electricity on the eve of winter. Since at that time the energy bridge from Russia had not yet been built, a state of emergency was declared on the peninsula. Kyiv then set about to blackmail the inhabitants of the peninsula: they were offered electricity in exchange for signing an agreement with an electric company that included a line acknowledging Crimea and Sevastopol to be part of Ukraine. This blackmail ended in a massive failure. Only 6.2 per cent of the Crimean residents surveyed supported the Ukrainian proposal while 93.1 per cent rejected it, agreeing to endure their difficult conditions for several more months. The contract with Ukraine was not finalized on Kiev’s terms.

For three years, the Western democracies have been turning a blind eye to the historical choice made by the people of Crimea. Ukraine has repeatedly tried to challenge this choice through provocations, blockades, and blackmail. However, the people of Crimea chose to live with reduced electric lights and heat and to endure other inconveniences and deprivations, if only to avoid becoming once again part of Ukraine. 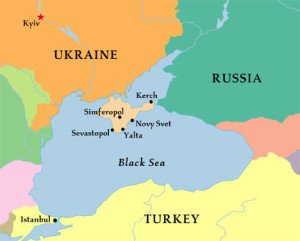 Another conspicuous result of Crimea’s transition to Russian jurisdiction is also telling: it turns out that contrary to Ukrainian and Western propaganda, there are no conflicts between the Russian and Ukrainian populations in their shared home. Without the Ukrainian nationalist element in Crimea, it becomes clear that between the Russian and Ukrainian peoples there is no enmity, no tensions, and no reason to fight one other. Three state languages are officially recognized in the republic: Russian, Ukrainian, and Crimean Tatar. Muslim mosques peacefully coexist with Russian Orthodox churches. Were it not for the warmongers who are trying to jump-start the underground activities of Hizb at-Tahrīr and other radical organizations in Crimea, Crimea would have no other problems, except one – coping with the devastation wrought by Ukraine.

Throughout all the years since its 1991 independence, Ukraine enjoyed what it had inherited from the USSR in Crimea without investing a cent in the peninsula. As a result, Crimea today lags noticeably behind Russia’s flourishing Kuban region on the other side of the Kerch Straight (Black Sea and Sea of Azov). For the last three years, Russia has been actively investing in Crimea. Annual subsidies amount to more than $600 million, which does not include the multi-billion-dollar investments in the construction of the Kerch Strait Bridge, which is a distinct line item in the Russian government budget. Despite the enormous pressure from the international sanctions, these measures are already bringing real benefits to people’s lives.

In my next article, I’ll tell you all about life today on the peninsula.

Arina Tsukanova is a Russian-Ukrainian journalist from Kyiv currently living in Crimea. Before the February 2014 EuroMaidan coup in Ukraine, she worked for several Ukrainian newspapers, now closed. This article was also published on Strategic Culture Foundation, March 28, 2017.


Also by Arina Tsukanova:
A Nazi skeleton in the closest of Canada’s foreign affairs minister, published on Consortium News, Feb 27, 2017