Ex-UN Human Rights Expert Blasts ‘Manipulation’ on Venezuela: ‘We Are Swimming in an Ocean of Lies’ 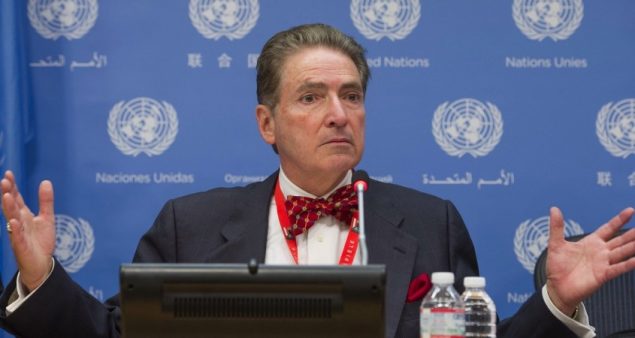 “We are swimming in an ocean of lies,” explained Alfred de Zayas. “When I went to Venezuela, I expected to find a humanitarian crisis.”

“I was predetermined to find a humanitarian crisis,” he continued. “I walked the streets, I spoke to people of all kinds, and that was not the case.

“That means I had been manipulated. I had been lied to. And I resent that.”

De Zayas previously served as UN independent expert on the promotion of a democratic and equitable international order. A renowned legal scholar, he spent decades working as a senior lawyer for the UN High Commissioner for Human Rights and is today a professor of international law at the Geneva School of Diplomacy and International Relations.

He made these remarks during a side event panel on Venezuela at a UN Human Rights Council session in Geneva on March 19, where he spoke alongside The Grayzone’s Max Blumenthal and Anya Parampil.

Alfred de Zayas was the first UN expert to visit Venezuela in 21 years. He traveled to the South American nation for an investigation from November 26 to December 5, 2017, during his time as a special rapporteur.

After his trip, de Zayas produced a detailed report on Venezuela(PDF), which details how economic warfare and sanctions led by the United States government have devastated Venezuela and drastically hurt its civilian population. De Zayas presented this report to the UN Human Rights Council in September 2018, but it was ignored.

In his time in Venezuela, De Zayas met with a wide variety of groups, including opposition leaders, NGOs, and Fedecámaras, the opposition-dominated chamber of commerce; as well as government officials. He said that he faced harsh personal attacks from the Venezuelan opposition while inside the country.

On the “Propaganda vs. Reality” side event at the UN this March, De Zayas insisted that the leftist government of President Nicolás Maduro had demonstrated a clear willingness to negotiate when engaged in good faith.

At the end of his trip, de Zayas recalled that he handed Venezuelan Foreign Minister Jorge Arreaza a six-page memo with several demands that the government promptly obliged.

De Zayas said he requested the release of 23 people, and the Venezuelan government went above and beyond, releasing 80. He also requested increased Venezuelan collaboration with the UN Food and Agriculture Organization (FAO), and Caracas agreed.

De Zayas said he also called on Arreaza to negotiate the release of the German journalist Billy Six, who had worked closely with the opposition and was accused by Caracas of being a spy. After two months, the Venezuelan government agreed to release Six and returned him to Germany.

Condemning regime change attempts, foreign intervention, and sanctions, de Zayas instead called for the international community to support the Montevideo mechanism, a dialogue process proposed by the governments of Mexico and Uruguay in order to reach a peace settlement between Venezuela’s government and US-backed opposition.

On the panel, Alfred de Zayas also criticized previous reports on Venezuela by the United Nations Office of the High Commissioner for Human Rights (OHCHR), which he said were “unprofessional” and politicized.

Two past OHCHR reports, conducted by former High Commissioner Zeid Raad al-Hussein, “were simply unprofessional,” de Zayas argued, “because they violated the most fundamental principle of methodology, the principle Audiatur et altera pars — that you have to listen to all sides, and you have to reflect the information that you get from all sides, and not that you get from the political opposition.”

“Those two reports, unfortunately, are political pamphlets,” de Zayas said. “And that is unworthy of the Office of the High Commissioner for Human Rights.”

In December 2018, De Zayas noted, the Venezuelan government invited the UN’s new high commissioner for human rights, Michelle Bachelet, to visit in order to investigate the human rights situation in the country. Bachelet agreed to do so, and prepared a team.

“What she has to find out is why. Which are the causes of this so-called ‘humanitarian crisis,’” de Zayas continued.

If she investigates the effects of the US government’s sanctions on Venezuela, de Zayas said, Bachelet and her team “will realize the adverse impacts of the sanctions.”

“The credibility of the Office of the High Commissioner for Human Rights depends on it,” cautioned de Zayas, who stressed that he worked for decades as a senior lawyer for the UN body.