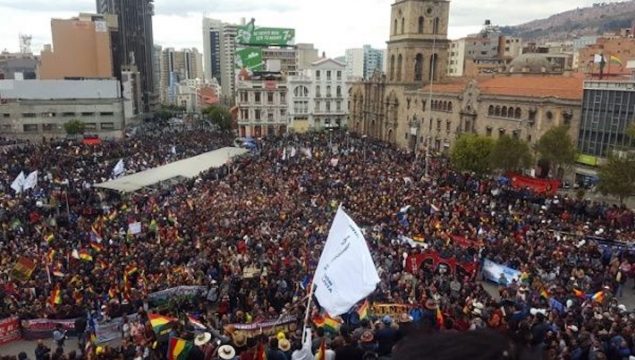 Eco Morales has rejected the violence against some Bolivians, explaining that such attacks have racist and discriminatory roots to them.

The president said that fraud is an “invention” given the impossibility of the right to govern the South American nation through the polls.

Social movements remain in the streets of Bolivia in support of President Morales, who was re-elected after the vote last Sunday, October 20, with 47 percent of popular support, 10 points ahead of the former opposition candidate Carlo Mesa. The Bolivian cosnituation states that with such difference, the winner of teh first round avoids a runoff.

“These mobilizations are not in defense of Evo but of the people themselves,” said the indigenous leader as he thanked the social organizations gather to defend democracy.

Opposition leaders have rejected the outcome of the elections and claim there was fraud. However, they also refuse to participate in the audit carried out by the Organization of American States (OAS) together with experts from Mexico, Paraguay and Spain.

Opposition protests and roadblocks are taking place in different cities in the country. Some protests have turned violent and looting has cost the country a heavy economic damage.

Morales rejected violence against some Bolivians explaining that such attacks have racist and discriminatory roots to them. “I thought we had buried hatred, discrimination, insult for life … we know we have differences in character, but that’s why we are a Plurinational State,” he argued.

He also urged the population to defend the process of change that began with his first government and that has led Bolivia to become a model of economic growth and distribution of wealth in teh region.

“Political figures ask me how we have reduced poverty and how the nation grows economically … they do not understand it because that was not the case before,” the Bolivian president said.

He explained that economic liberation comes from political liberation that, in turn, was given achieved thanks to the dignity of the people. “We have an obligation to take care of the economy.”

He said that his movement is “convinced that the enemy of unity is the capitalist system,” explaing that the economic neoliberal model intend to dominate people with poverty and division.