Both Federations have demanded an immediate and independent investigation into his death. 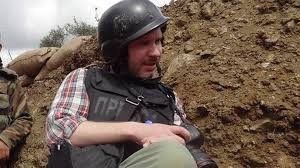 Buzina was a controversial figure in Kiev as a journalist, TV presenter and former editor-in-chief of the Russian language Kiev-based newspaper Segodnia. He was known for his pro-Russia views and was a key witness in a criminal case related to a pro-Russia rally in Kiev. Previously in 2012, he had run for a seat in parliament on the Party of the Regions ticket.

IFJ President Jim Boumelha told Sputnik, “We were all very shocked by his killing. For quite a long time, there hadn’t been any killings, so we thought that maybe the situation had improved. But suddenly we’ve got another killing.

“He may or may not have been a controversial figure, but journalists must never be targeted for their reporting or their views. We have demanded a swift and independent investigation.”

His death comes eight months after the death of Rossiya Segodnya’s photojournalist Andrei Stenin who went missing on August 5, 2014 in eastern Ukraine while on an editorial assignment. In September 2014, investigators confirmed that Stenin died near the city of Donetsk. He was awarded the Russian Order of Courage posthumously for bravery and heroism in the performance of his professional duties.

The Council of Europe has joined the IFJ, EFJ and other journalistic organizations in launching a new internet platform aimed at protecting journalism and promoting the safety of journalists. It is designed to issue alerts concerning media freedom threats and will bring them to the attention of the Council of Europe institutions.

Jim Boumelha told Sputnik, “The initiative raises awareness every time a journalist is targeted and we make a fuss about it. Secondly, it gives us the opportunity to tell governments to do something about it. Either to conduct proper independent investigations after every single targeting of journalists, or else highlight the fact that they have to comply with their obligation in international law — they have to protect journalists.”