An EU panel on Ukraine has slammed Kiev’s investigation into the May 2014 violence in Ukraine’s southern city of Odessa, saying it lacks independence. It also added there’s evidence that police were complicit in the disorder. 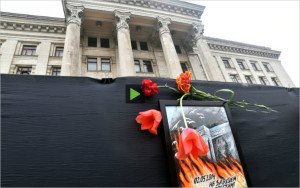 Monthly commemorations honor the victims of the May 2, 2014 massacre in Odessa, Ukraine

The Council of Europe’s International Advisory Panel said in a statement on Wednesday (Nov 4) the probe failed to comply with the requirements of the European Human Rights Convention. (The full, 91-page report is here.)

On May 2, 2014, Ukrainian ultra-right football fans attacked an anti-Kiev protesters’ camp outside the Trade Unions Building in central Odessa. Football hooligans were soon joined by Maidan activists – supporters of the pro-EU February protests in Kiev – and members of the Right Sector group. Violent clashes and a fire in the Trade Union Building led to 48 deaths and several hundred people were injured.

The Council of Europe’s International Advisory Panel found that the investigations lacked independence, pointing toward police complicity in the violence.

“Given the evidence indicative of police complicity in the mass disorder of 2 May 2014 and the hierarchical relationship between the SES [State Emergency Service] and the Ministry of the Interior, the investigations as a whole should have been carried by an organ independent of the Ministry,” the report states.

The Panel stressed that this calls for “an independent and effective mechanism for the investigation of serious human rights violations committed by law enforcement officers and other public officials.”

The report pointed to inefficient division of investigative work and inadequately allocated resources. The investigation of the actions of the SES was allocated to the local Ministry of the Interior, which remained inactive during the crucial early stages of the investigation.

The panel also stressed the “deficient quality of the investigation,” saying there were no efforts made until December 2014 to investigate the unexplained delay of over 40 minutes in the arrival of firefighters at the Trade Union Building.

The Panel also found that Ukrainian authorities failed to provide sufficient public scrutiny of the events.

“In contrast to the Maidan investigations, the authorities did not take any coordinated measures directly and regularly to inform the victims and next-of-kin about the progress of the investigations.”

The International Advisory Panel was constituted by the Secretary General of the Council of Europe in April 2014, initially to oversee the Maidan violence investigations. In September 2014, the Panel’s mandate was extended to examine whether the Odessa investigations met all the requirements of the European Convention on Human Rights and the case-law of the European Court.

To conclude, the Panel “considers that the deficiencies identified in this Report have undermined the authorities’ ability to establish the circumstances of the Odessa-related crimes and to bring to justice those responsible.”

As for their initial analysis into Ukraine’s investigation of the Maidan demonstrations, the Panel called Ukraine’s Interior Ministry “uncooperative and obstructive” and the investigation not meeting the requirements of the European Convention on Human Rights

Strasbourg, April 15, 2015–The Chair of the International Advisory Panel (IAP) on Ukraine, Sir Nicolas Bratza, in his address today to the Committee of Ministers of the Council of Europe presented the key findings of the Panel’s report on its review of the investigations into the Maidan violence.

Sir Nicolas explained that the Panel’s report highlighted the issue of impunity and lack of accountability of law enforcement officers: problems that had already been identified in relation to Ukraine in the judgments of the European Court of Human Rights. The Panel had found a lack of independence and effectiveness in the investigation and in particular a failure by the Ministry of Interior and the State Security Service of Ukraine to co-operate with the Prosecutor General’s Office.

The Report, published on the 31st of March 2015, provoked a strong reaction from the Ministry of Interior. Sir Nicolas underlined that the Panel had made numerous enquiries and visits to the Ministry, to which “it received no satisfactory answers to dispel the clear impression of a lack of effective co-operation”. The IAP Chair also said that the developments at the end of 2014 suggested better co-operation and were encouraging, but “these developments occurred ten months after the main Maidan events, during which time very limited progress has been made in the investigations”.

In conclusion, he commended the “genuine efforts, especially on the part of the representatives of the prosecuting authorities, to address more closely the international requirements which should govern the investigations”. Among the encouraging changes Bratza cited the creation of the Special Investigation Division in the Prosecutor General’s Office and the more active position adopted by the current Verkhovna Rada to improve the quality of the Maidan investigations.

“The Panel’s focus is now on the violent events in Odesa in May of last year,” the IAP Chair said. He expressed his hope that despite the strong public criticisms made by the Minister of Interior of the Panel’s work on Maidan, the Panel will receive from the authorities the full cooperation in its work that was promised by the Government of Ukraine.

The International Advisory Panel was constituted by the Secretary General of the Council of Europe to assess whether the investigations carried out by the national authorities into the violent incidents which took place during the Maidan demonstrations from 30 November 2013 to 21 February 2014 met the requirements of the European Convention on Human Rights and the case-law of the European Court. Following the publication of the Maidan-related report, the Panel has begun its review of the authorities’ investigations into the violent incidents in Odesa of 2 May 2014. That work continues and the Panel’s findings will be presented in early autumn 2015.

During the same meeting, on 15 April 2015, the Committee of Ministers, bringing together representatives of all 47 member States of the Council of Europe, adopted a Decision in which it welcomed the IAP report and invited the Ukrainian authorities to take all appropriate action to follow up its conclusions.