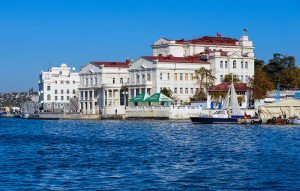 BRUSSELS — EU governments extended for a year a ban on trade and investment with Crimea on Friday, meaning European help for Russian Black Sea oil and gas exploration and visits by European cruise ships will remain outlawed.

The measures were adopted following Russia’s annexation of Ukraine’s Crimea region in March last year and reinforce the EU’s policy of not recognizing the annexation.

“The EU continues to condemn the illegal annexation of Crimea and Sevastopol by the Russian Federation and remains committed to fully implement its non-recognition policy,” an EU statement said.

The measures, extended until June 23, 2016, include a ban on importing products made in Crimea into the EU.

European cruise ships cannot call at ports in the Crimean Peninsula, except in an emergency, and it is forbidden to provide other tourism services in Crimea.

Products and technologies for prospecting, exploration and production of oil, gas and mineral resources may not be exported from the EU to Crimea. Exports to Crimea of certain products for use in the transport, telecommunications and energy sectors are also banned.

The EU has also imposed sanctions on the Russian finance, defense and energy sectors over what it says is Russia’s support for separatists in eastern Ukraine fighting government forces.

EU foreign ministers meeting in Luxembourg on Monday are expected to agree to extend these economic sanctions until Jan. 31 next year, giving the bloc time to assess how far the separatists and Moscow have complied with a cease-fire agreement.

The six-month extension was agreed by ambassadors from the 28 EU nations in Brussels on Wednesday and their decision is expected to be ratified by ministers without discussion on Monday, barring a change of heart by any government.

“I don’t suspect any last-minute change,” a senior EU official said on Friday.

There is not expected to be any discussion of Russia or of any further tightening of sanctions when EU leaders meet for a summit in Brussels toward the end of next week, officials said.

Kremlin spokesman Dmitry Peskov said on Wednesday Russia’s reaction to the renewal of EU sanctions would be based on the “principle of reciprocity,” suggesting it would extend counter-sanctions that include a ban on Western food imports.