The ceasefire between the Turkish authorities and the Kurdistan Workers’ Party (PKK), hard-won in March 2013, was violated by Ankara in the summer of 2015. The murder of two police officers, who had been allegedly involved in the organization of an act of terrorism against Kurds in the town of Suruc near the Syrian border, served as a pretext for the resumption of military operations against the KPP. The Turkish leadership did not investigate the act of terrorism itself and the events it triggered, but promptly announced a large-scale punitive operation against Kurds. KPP’s bases and camps, located thousands of kilometers from the place of the incident, in the Qandil mountains of Iraq, were bombarded by aircrafts and missiles. The areas densely populated by Syrian Kurds were shelled. Cases of incursion of armed gangs of jihadists from the territory of Turkey were registered. Raids and arrests of Turkish activists were launched in Turkey. And the headquarters of the legitimate parliamentary pro-Kurdish People’s Democratic Party (HDP) were attacked. 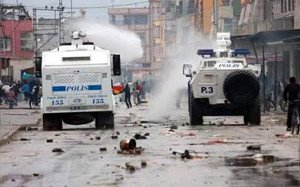 A new phase of the anti-Kurdish campaign was instigated in the wake of the defeat of the ruling Justice and Development Party (AKP) in the parliamentary elections in June 2015. Mr. Erdogan’s party lost its constitutional and simple majority required to form a one-party government: JDP won only 41% of votes—the worst result in the history of its participation in elections.

Mr. Erdogan’s obsessive plans to implement a constitutional reform and transform the country into a presidential republic (instead of the current parliamentary) did not materialize. And to add insult to injury, the pro-Kurdish HDP gained 13% of votes and 80 seats in the Majlis. This party is committed to the rights of more than 18 million Kurds residing in Turkey (approximately 23% of the country’s population) and the rights of all national and religious minorities. The current Turkish Constitution stays true to Mustafa Kemal Ataturk’s tradition, rooted in the total and complete Turkification of the country, implying assimilation of all ethnic groups to form one nation—the Turks. Parliamentary opposition parties refrained from cooperation with AKP causing it to fail to form a coalition government. The president was forced to call an early parliamentary election. The second election was held on November 1, 2015 in the circumstances of an undeclared war on Kurds. Despite harsh circumstances, the pro-Kurdish party managed to win about 60 seats in the parliament in the rerun, and retained its ability to defend the rights of national and religious minorities in the parliament.

There was a second and no less important reason for Mr. Erdogan to resume repression of the Kurds—the fiasco of his Syrian policy. The plans to overthrow the government of Bashar al-Assad by force fell through after the Russian Military Space Forces (aerospace forces) began their operation in Syria and after the decision to lift sanctions on Iran had been made. Not only has Damascus managed to defend its strategically important regions, but it has also begun gradual liberation of the territories captured by the armed opposition and radical Islamists. Today the Syrian Kurds are playing an ever more important role since they, with the support of air forces of the Western coalition, have driven militants of Daesh and Jabhat al-Nusra away from the areas of their residence and have taken control over some sections of the Syrian-Turkish border. That reduced Turkey’s chances to intervene in Syria’s domestic affairs and threatened the existence of the border corridors it controls and of the entire illegal business that has been thriving in the frontier zone (trade in oil, museum artifacts and weaponry; illegal migration; militants projection, etc.). Mr. Erdogan is also worried that the de facto autonomous region of the Syrian Kurds could turn into a base of Turkish PKK and be perceived by the Turkish autonomists as an example to follow.

Even Washington and Brussels frown at Ankara’s anti-Kurdish policy and some other provocative steps it is taking. The US and NATO did not support military actions of Turkey against the Syrian Kurds either. The breach of relations with Moscow was the last straw. It led to complete isolation of Turkey and strained its relations with all neighboring countries (Syria, Greece, Cyprus, Armenia, Iran and Iraq). The “zero problems with neighbors” policy proclaimed by Ahmet Davutoglu in 2008 turned into a “zero relations with the neighboring states” policy. Mr. Erdogan’s attempts to restore relations with Israel and find new allies (Saudi Arabia, Qatar, Ukraine) to compensate for these losses have not proved to be very successful yet.

The prospects of resumption of Geneva talks and of ceasefire in Syria (at least between Damascus and the opposition) threw Ankara into hysteria and panic. The Turkish leaders immediately voiced their readiness to participate in the ground military operation in Syria either on their own or in an alliance with Saudi Arabia. Ankara clearly understands that if the Syrian conflict is resolved peaceably, Turkey and its allies in Riyadh and Doha will miss an opportunity to install a pro-Turkish (Islamist) government there. Not only that, but also Ankara’s plans to either occupy, or at least create a buffer zone in the northern regions of Syria will prove unrealistic since even Turkey’s western partners disapprove of these plans. It is no coincidence that the permanent representative of Turkey to UN, Halit Cevik, was compelled to make a statement on February 20, 2015, assuring that “Turkey is not planning on conducting a ground operation in Syria without the consent of the international coalition or the United Nations Security Council.” But it by no means implies that Ankara has come to terms with its defeat in Syria. Most likely, Mr. Erdogan will continue his struggle against the Syrian regime and the Syrian Kurds by engaging in his habitual methods (arming gangs of Turkmen militants, Turkish nationalists, saboteurs, Islamist militants of all sorts and letting them across the Turkish-Syrian border, shelling adjoining Kurdish enclaves and arranging new provocations on the border, etc.). 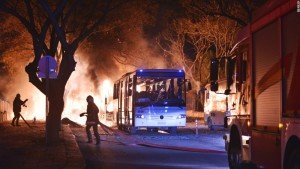 A high-profile act of terrorism committed on February 17, 2015 in Ankara, where 28 people died and 61 were injured, is an example of such provocations. What’s really puzzling is that the explosives were detonated in the administrative center of the Turkish capital, close to the buildings of the general staff and parliament. The majority of victims were Turkish air force officers. What really impresses is the ease with which the suicide bomber, driving a car loaded with explosive materials, managed to enter this strictly protected district and detonate them right at the moment when a bus with officers stopped nearby. Hardly had news agencies finished reporting this tragedy, when Turkish PM, Ahmet Davutoglu, made a hastily statement condemning the military wing of the Syrian Democratic Union Party (PYD) threatening to reinforce Ankara’s military operations against PYD and Turkish PKK. Shortly thereafter, the PKK camps in northern Iraq as well as Kurdish enclaves in Syria were shelled and bombed again, while cleansing continued in the Kurdish regions of Turkey. It felt as if the Turkish authorities had been waiting for this terrorist act to unleash an even bloodier and more widespread phase of aggression against the Kurds. Kurdish residential quarters are being destroyed in the Diyarbakır district. Heavy weapons are being used against civilians. Hundreds of women, children and elderly men have been killed. Tens of thousands of Kurds had to abandon their homes and fled to neighboring districts in search of shelter from shelling and persecutions. According to the local media, the mass murder of Kurds in Turkey can be compared to the 1915-1923 genocide of Armenians.

It looks like Mr. Erdogan is taking it out on the Kurds for the shortcomings of his foreign policy, including his failures in Syria, by launching a new stage of aggression and punitive operations against them. But these measures will hardly help the ruling AKP to consolidate the Turkish society and overcome their isolation on the international scene. Russia (as external) and the Kurds (as internal) deterrents do not stop Turkey any longer. More and more Turkish citizens realize that the adventurism of Mr. Erdogan’s foreign policy and his staking on nationalism and Islamism in the domestic policy as well as his flirting with radical Islamists is pushing Turkey not simply into a dead end, but right into the abyss.

Stanislav Ivanov, PhD, is a leading research fellow of the Institute of World Economy and International Relations (IWEIR) and the Institute of Oriental Studies of the Russian Academy of Sciences. This article was written exclusively for New Eastern Outlook.