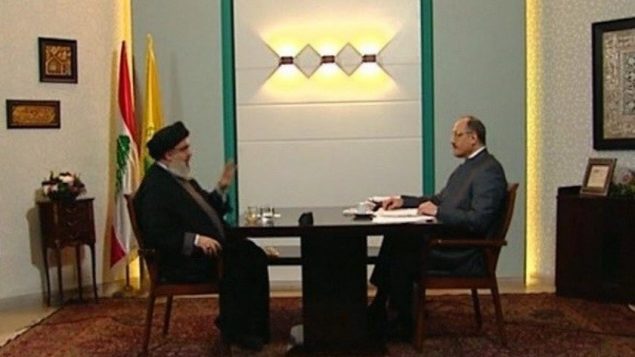 During a three hour live broadcast interview with al-Mayadeen TV on Saturday, Nasrallah showed he has the technical ability to broadcast live for this length of time without the fear of being located.

The leader of Hezbollah Sayyed Hassan Nasrallah challenged world intelligence services, notably the Israelis, who track him by the hour, during a three hour live broadcast interview with al-Mayadeen TV on Saturday. Nasrallah showed he has the technical ability to broadcast live for this length of time without fear of being located. Even more important, Nasrallah showed the capacity to receive electronic messages via an internet connection in his vicinity, allowing him to take questions and get breaking news from around the world. This is a clear indication that Nasrallah trusts Hezbollah’s technical competence, capable of jamming any interception signal and efficient enough to blind any local or international intelligence services trying to locate him.

Hezbollah seems to enjoy electronic abilities superior to those of many Middle Eastern and other countries. What is unusual is that Nasrallah displayed these abilities, on line, to tens of thousands of people watching the interview.

Hezbollah’s electronic capability is not new: Israel tried to physically intercept its fibre optic landlines and to electronically intercept the mobile phones of many officers and leaders. Indeed, Israel’s interception capabilities made it possible, in the past, for the Israeli army to break into Hezbollah’s telephone network, exposing a spider web of connections and leading to the destruction of hundreds of Hezbollah homes, offices and bases during the 2006 war.

It is not a secret that by intercepting one mobile phone, it is possible to identify other mobile phones in the same location and to create a record of the phone’s IMEI even if the user changes his or her SIM card but keeps the same mobile phone.

Hezbollah recognised the mistake of its members and issued a serious warning to all members or leaders preventing them from carrying a mobile phone at work. Failure to follow those instructions caused much of the destruction Hezbollah suffered in the 2006 war.

At the same time, Hezbollah was able to use the same available technology to intercept and capture spies. In 2006 Hezbollah ambushed the Israeli Special Operation Forces (SOF)by creating a false track of the presence of one of their most wanted and top leaders at al-Rasoul al-A’zam, on the Beirut airport road. One of those present revealed at the last minute the plan that could have led to the killing and arrest of many SOF soldiers. The same spy fell into his own trap, a few years later, due to misuse of his mobile phone. The SIM card he uses to contact Israel with was intercepted by Hezbollah when he inserted it, by mistake, into his Lebanese phone. It took him very little time to realise his mistake, but not enough to escape to Israel. Hezbollah capability helped in arresting many spies of which some where not exposed overtly.

Far from hiding under the ground–as Israel propaganda tried to portray him for years after the 2006 war–Sayyed Nasrallah spoke very confidently in an elegant flat. In fact, Sayyed Nasrallah meets local politicians, regional officials, and other Hezbollah leaders in various flats in Beirut, never the same ones. This is another indication of his frequent movements, a security procedure in accordance with a figure of his stature on the most wanted list of many countries, including Middle Eastern and European ones collaborating with Israel and the USA.

Nasrallah’s professional security team freely moves him around inside Lebanon and abroad; he travels between Beirut and Damascus on a single long, busy road to meet President Bashar al-Assad. Nasrallah has an electronic media team providing him with all breaking news on the spot and a resumé of all newspapers and media outlets publishing information or articles related to the Middle East.

Hezbollah’s electronic abilities seem to be constantly updated in accordance with the latest technology and security measure needed to face his enemies and to protect his leaders and military capabilities. The battle between Israel and Hezbollah is not merely a military one but also a battle of intelligence and technology.