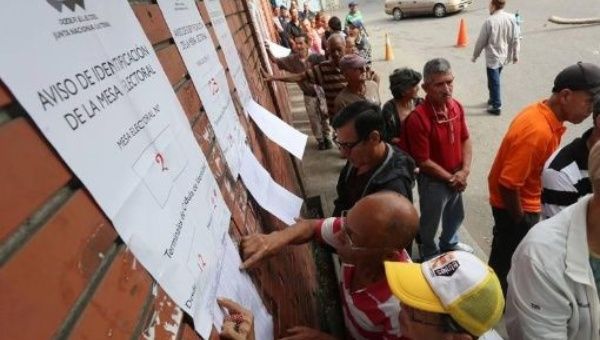 Paper ballots will be used to verify the electronic vote on Sunday night. | Photo: AVN

Election observers at Venezuela’s  presidential polls on 21st May included  former Ecuadorian President Correa, former Spanish Prime Minister Zapatero and European MEP Javier Couso. They reported a calm, orderly and valid process. However opposition candidates Falcon and Bertucci refused to recognise the results of the election, which the United States sought to have called off. We await the outcome of the Mueller Enquiry into fraudulent interventions in US elections, which will provide an interesting comparison

Over 20 million voters are eligible to vote in Sunday’s elections in Venezuela.

International observers monitoring the Venezuelan elections said Sunday that the vote took place without any incidents, in an atmosphere full exercise of civic duty.

“100 percent of the electoral poll stations are open, we’ve asked witnesses from various political parties and they have all emphasized that the elections occurred with normality,” Carlos Lopez, one of the 150 international observers who came to the country in order to guarantee the transparency and legitimacy of the process, said before stations began to close at 5:00 p.m. local time.

Among them was former Ecuadorean President Rafael Correa, who declared “we came here in order to accompany a celebration of democracy.” meanwhile Spain’s former President Jose Luis Rodriguez Zapatero also supervised the elections, saying everything was normal and that it was necessary to wait and see how it will develop.

Member of the European Parliament Javier Couso stressed Venezuelans’ sense of civic duty, while slamming Europe over refusing to respect their right to decide the fate of their country via the elections.

“(Venezuela) is a complete exception which offends not only the defenders of democracy but also the Venezuelan people —who is only demanding the right to decide through direct vote and chose between all the options,” said Couso.

The head of the Electoral National Council of Venezuela, Tibisay Lucena said that all international observers confirmed that “fraud was not possible in the Venezuelan electoral system.