Editorial in New York Times suggests U.S. is looking for a face-saving way out in Ukraine

The New York Times recommends a diplomatic settlement of the Ukrainian conflict based on the Russian proposal of a year ago for Ukraine’s federalisation. But Kiev says no and Moscow and the rebels are unlikely to agree now. 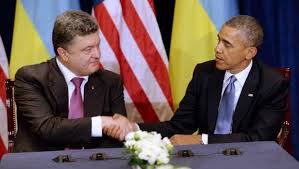 Poroshenko and Obama in June 2014

The editorial in the New York Times we attach below is the first belated acknowledgement that the only way of saving Ukraine and ending the war is by conceding federalisation to Ukraine’s eastern regions.

We do not know for sure whether this editorial reflects official U.S. thinking. However, the probability is that it does. Firstly, it is not unheard of for the U.S. government to float ideas in this way through editorials in the New York Times. The Times is regularly chosen to do this because of its reputation and because it is widely read abroad.  The British government used to use the Times of London in the same way.

We have previously reported the concerns of some officials within the U.S. government at the way in which the Ukrainian crisis is leading U.S. relations with Russia into an impasse.

It is at least possible that with the war going disastrously wrong for Kiev and with the U.S. administration looking increasingly short of options, the administration is now trying to find a face-saving way out by finally embracing the federalisation solution that the Russians proposed last spring.  If so, then this editorial, which will surely be read in Moscow, is intended as as an olive-branch.

The following words give the clear impression that a concrete offer has been made to Moscow through diplomatic back-channels. The carefully chosen words clearly convey the sense that the authority of the U.S. government lies behind them:

Russian officials have suggested that Moscow has no interest in annexing eastern Ukraine, the way it grabbed Crimea, but rather seeks a Ukrainian federation in which the pro-Russian provinces would have relative autonomy, along with assurances that Ukraine will not move to join NATO.

There is definitely potential for negotiations there……..

Tempting as it is to focus on punishing Mr. Putin, the greater objective must be to end the fighting so that Ukraine can finally undertake the arduous task of reforming and reviving its economy. Toward that end, the West must make clear to Mr. Putin that if a federation is his goal, the United States and its allies will actively use their good offices with Kiev to seek a workable arrangement.”

Poroshenko has just issued another statement ruling out federalisation.  This also suggests we are looking at an actual behind-the-scenes offer.  We have already explained why, for Maidan, talk of federalisation is anathema. Poroshenko’s words suggest he knows of the U.S. initiative and is trying to scotch it and to make his opposition to the idea clear before Secretary Kerry flies to Kiev as he is due shortly to do.

Moscow and the rebels are however unlikely to take up the offer.

The Russians pushed strongly for federalisation of Ukraine’s eastern regions following the February coup.  On 17th April 2014, a statement was agreed by the U.S. and Russian foreign ministers, John Kerry and Sergei Lavrov, in Geneva. It was signed by the EU and the Ukrainian government and called for constitutional negotiations between the various Ukrainian parties. These were obviously intended to lead to a constitutional settlement that would have led to federalisation. Many people in the Donbass at the time of the independence referendum of 11th May 2014 appeared to support the idea.

Since the federalisation idea was floated last spring, there has been a murderous war in the Donbass causing massive devastation and loss of life. Russia has been subjected to two rounds of sectoral sanctions. There has been a relentless propaganda campaign against Russia, the rebels and Putin himself. It is difficult to believe that all of this has not caused views to harden since the spring.

Promises of constitutional negotiations like the ones made in Geneva on 17th April 2014 and in Minsk on 5th September 2014 have come and gone. No negotiations have, however, taken place. Given that Kiev is dead against them, after all that has happened it is very doubtful the rebels or the Russians now believe they ever will. Nor are the Russians likely to be in any sort of mood to believe in U.S. assurances that “if federation is the goal, the United States and its allies will actively use their good offices with Kiev to seek a workable arrangement”.

What made sense in the spring, when it was proposed to prevent a war, may anyway no longer make sense in the winter, after the war has already happened. After so much violence it is barely conceivable that the rebels or the people of the Donbass who support them would now agree to be part of a federation that left them within Ukraine, especially now when they are on the brink of victory.

If this is correct, then it looks like the U.S. and its allies have missed the bus.

The fighting in eastern Ukraine has flared up again, putting an end to any myth about the cease-fire that was supposed to be in force since September.

Though the Russian economy is staggering under the twinned onslaught of low oil prices and sanctions — or, conceivably, as a result of that onslaught — President Vladimir Putin has sharply cranked up his direct support for the rebels in the provinces of Donetsk and Luhansk, while continuing to baldly deny it and to blame all the violence on the United States.

Meanwhile, Ukraine is broke, and without the military means to move against the Russian-backed rebels. Most of the victims are civilians who struggle with hunger and dislocation in the rubble of the combat zones and die in the constant exchanges of shells and rockets.

The eruption of fighting in recent weeks, which was not supposed to happen until spring, has given new force to pleas to the Obama administration to give Ukraine the means to resist Mr. Putin — in money and in arms.

Certainly the United States and Europe should increase their aid to Ukraine and explore ways to expand existing sanctions against Russia. NATO’s commander, Gen. Philip Breedlove, is said to support providing weapons and equipment to Kiev. And Secretary of State John Kerry is said to be open to discussing the idea. But lethal assistance could open a dangerous new chapter in the struggle — a chapter Mr. Putin would quite possibly welcome, as it would “confirm” his propaganda claims of Western aggression.

So far, President Obama has cautiously pledged to help Ukraine in every way “short of military confrontation.” Yet with sanctions and diplomacy making no headway against Russian aggression, it is imperative that the United States and its allies take a new look at what would bring Russia to a serious negotiation.

The first question is, to negotiate what? Along with denying the direct involvement of his troops in eastern Ukraine, Mr. Putin has not made clear what he is trying to achieve. Russian officials have suggested that Moscow has no interest in annexing eastern Ukraine, the way it grabbed Crimea, but rather seeks a Ukrainian federation in which the pro-Russian provinces would have relative autonomy, along with assurances that Ukraine will not move to join NATO.

There is definitely potential for negotiations there. Yet the latest rebel attacks have focused on Mariupol, an important port on the Black Sea, and on expanding the rebels’ control to areas that would give their self-proclaimed “republics” greater military and economic cohesion. And that speaks to long-term rebel occupation.

Tempting as it is to focus on punishing Mr. Putin, the greater objective must be to end the fighting so that Ukraine can finally undertake the arduous task of reforming and reviving its economy. Toward that end, the West must make clear to Mr. Putin that if a federation is his goal, the United States and its allies will actively use their good offices with Kiev to seek a workable arrangement.

But if the evidence continues to accumulate that Mr. Putin and the rebels are carving out a permanent rebel-held enclave in eastern Ukraine, à la Transdniestria, Abkhazia or South Ossetia, he must know that the United States and Europe will be compelled to increase the cost.