MOSCOW–The Dutch Safety Board (DSB) conclusion on the missile detonation which caused the crash of Malaysian Airlines MH17 is based on a report of the Dutch National Aerospace Laboratory (NLR), based in Amsterdam. The 66-page NLR report can be found as an appendix to the main DSB report. Combined in their release this week, the two Dutch organizations and the two Dutch reports claim that a Russian-made Buk missile of the 9M38 model series, armed with warhead type 9N314M, was fired at MH17, exploding to the left of the aircraft at about two metres from the cockpit. The blast and shrapnel spray from this detonation, the two Dutch reports claim, caused the break-up of the aircraft in the air, and the deaths of all on board. 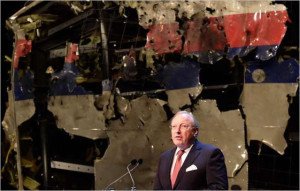 From the evening of the crash day, July 17, 2014, western government officials and media reporters have blamed Russia for manufacturing the missile, ordering it fired, and causing the crash. They are now citing the Dutch reports as proof of the initial assignment of blame. This is despite the DSB’s reluctance to do so in its report; and despite the refusal to date of Australian and Dutch police, coronial investigators and pathologists to release the detailed autopsy evidence they have gathered of the shrapnel which struck the aircraft and the bodies of those on board. According to the DSB report, shrapnel killed the crew in the cockpit, and three pieces of shrapnel, characteristic of warhead type 9N314M , were found in the bodies of the pilot and co-pilot. No crew member or passenger in the aircraft, outside the cockpit, was struck by this shrapnel, according to the DSB.

On these three pieces of metal hangs the case for a Buk missile detonation as the cause of crash; the cause of death; and Russian culpability for the shoot-down. But a search through the DSB records, and through the technical reports of shrapnel impact and blast simulation on which the DSB has based its conclusions, together with interviews with spokesmen for the Dutch investigations, finds that the only evidence for the source of the three metal fragments turns out to be a classified military secret of the Dutch Ministry of Defence.

Dutch authorities interviewed by John Helmer for his article

Questioned today for the source of its evidence for the firing of the 9M38 or 9M38M1 model missile , and for the detonation of the 9N314M warhead, NLR spokesman Jan Venema said the NLR will not disclose how, and from what source, it had obtained the missile and warhead data for its detonation and shrapnel testing, and for the conclusions it has reported. According to the LNR text (page 46), LNR relied on an Almaz-Antei “representative” for the information that “only the 9N314M warhead contains bowtie fragments”.

Almaz-Antei has reported several times in public this week that the 9N314M warhead cannot be operated from the 9M38 missile series. The two cannot be connected electronically, according to the missile manufacturer. In addition, Almaz-Antei has confirmed that in the warhead types containing the distinctive shrapnel — the Russians are calling this “I-beam”, the Dutch “bowties” and “butterflies” — there are approximately 7,800 elements in total. Of this number, not less than a third, or 2,600 fragments, are of the bowtie type, again according to the manufacturer. If the DSB and its consultant analysts are all telling the truth, the identification of just three in the cockpit crew’s bodies, and one other fragment in the cockpit wreckage, is inexplicable. Almaz-Antei says its computer modelling, as well as its physical blast simulation, make this impossible.

NLR cites Almaz-Antei in its report for a description of the characteristics of Buk missile models, warhead types, and shrapnel composition of the warheads. This is NLR’s tabulation of what it claims to have been the combinations (see chart).

Asked today to explain how the evidence of Almaz-Antei that the missile model and the warhead type cannot be combined operationally and fired together, Venema said NLR is prohibited from answering questions by an agreement with the DSB.

Venema claimed in a telephone conversation that NLR has “the experience and expertise” to analyse the evidence of the MH17 aircraft wreckage. In the past, has NLR had experience of testing Russian-made missiles and aerial munitions, Venema was asked. He refuses to say. “I can’t go into the detail of the study.” According to Venema, NLR has an agreement with DSB that “all questions have to be answered by them.”

A third Dutch report by the Netherlands Organization for Applied Scientific Research (TNO), a semi-government operation, has been published as an appendix to the main DSB dossier. The TNO claims it simulated the missile warhead detonation against a Boeing airframe by computer modelling, according to a programme called AUTODYN version 14.5. TNO reports that “in consultation with the DSB, the modelled warhead is type 9N314.” No explanation for selecting that warhead has been provided by TNO.

Monique De Geus is the spokesman of TNO. She was asked to say whether the simulation reported by TNO was done by three-dimension computer modelling only, or involved physical testing, and what was TNO’s source for the warhead data. De Geus interrupted the question halfway, saying: “we are not allowed to answer any questions about this. You must refer to the DSB.” When asked if the question might be asked in full before TNO answered, De Geus allowed the question to be read out on the telephone: was the simulation computerized or physical? and from what source were the parameters of the simulated warhead obtained? De Geus refused to answer, and hung up her telephone.

In addition to the DSB “consultation”, the TNO reports (page 3) “this study uses classified data as described in the Wet Bescherming Staatsgeheimen [State Secrets Protection Act] . The text of this report has been inspected and released for publication by the Netherlands Ministry of Defence”. A footnote to a description of the warhead at the end of the TNO report cites “Jane’s Defence Land-Based Air Defence 2009-2010, 22nd edition.” In short, the only sources for TNO’s conclusions about a Buk missile warhead blast is a NATO military secret, plus a five-year old commercial publication from London.

The TNO conclusions on the detonation have been cited by the NLR for substantiating its conclusions on the missile which brought MH17 down. NLR’s conclusions are the substantiation which DSB cites for its conclusions for the cause of the crash. So the DSB spokesman, Sara Vernooij, was asked from what source did the DSB obtain the parameters of the missile and warhead which have become the evidence for the DSB’s determination that a Buk missile was the sole cause of the MH17 crash. Vernooij said the DSB will not answer. “If it’s not in report, it is not to be released,” Vernooij said.