THE HAGUE–The reliability of evidence in the investigation of the crash last year of Malaysian Airlines Flight 17 in eastern Ukraine is at issue because of the sinister role of the Ukrainian secret service SBU in corruption and crime scandals. 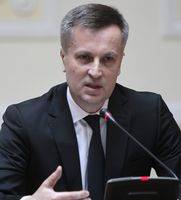 Former head of the SBU of Ukraine, Valentyn Nalyvaichenko, fired in June 2015 and linked to stolen art in Europe (AP)

Criminal law experts predict problems for criminal proceedings against the murderers of the passengers who died in the crash of Malaysian Airlines Flight 17 now that it appears that everything is false with the intelligence work that delivered all kinds of material evidence. The Christian Democratic Appeal (CDA) is set to ask questions about this in today’s parliamentary session.

“The ‘noise’ is guaranteed to play a role in any legal case,” said law professor Theo de Roos. “That goes for the defense but also for the judges who will examine evidence very critically. The public prosecution department should be looking now rather than later at the integrity of the evidence.”

It was the SBU that provided the wiretapped telephone conversations between pro-Russian [sic] rebels in the war zone just before and after the Malaysian Airlines Boeing was shot down from the sky. The Ukrainian security forces had also a big role in securing human remains, debris and rocket parts in the disaster area.

But the same SBU also appears in numerous criminal affairs. Several informants in the scandal of the paintings stolen from the West Frisian Museum in Hoorn, Holland in 2005 indicate former SBU head Valentyn Nalyvaichenko of this year is a mastermind in the stolen art trade. Nalyvaichenko was fired in June of this year.

Last year, the name of the former SBU chief was linked to large-scale smuggling of antiques discovered by Finnish police.

The ongoing investigation into corrupt Limburg policeman Mark M is also linked to Ukraine. A justice in Brabant recently requested assistance from Kiev. According to investigation sources, Mark M. kept a network in Ukraine of ‘gangsters and members of the secret service’. This past summer alone, 22 members of the SBU disappeared behind bars because of corruption and criminal practices.

The CDA calls the SBU scandals a great risk for the criminal investigation into the MH17 case and wants documents and explanations from Justice Minister Ard van der Steur.

“There is little actual evidence [in the investigation],” says Christian Democrat parliamentarian Pieter Omtzigt. “What there is may have been compromised to some extent. The evidence was collected way too late at the scene of the crash and now appears to have been collected by dishonest people.”

The CDA wants to know why satellite and radar data of Ukrainians, Russians and Americans is lacking from the report of the Dutch Safety Board into the crash of the MH17. “It appears this has still not been discussed with Ukrainian air traffic control.”

Dutch police say cooperation with Ukrainian researchers is “good” and all the submitted evidence “has been critically examined”. Professor of international law Geert-Jan Knoops, however, feels that more research into the reliability of evidence is needed.

“The prosecution has the duty to exclude any evidence in a scenario where evidence has been tampered with. That means, for example, it must closely examine how the SBU selected wir4tapped phone calls and who was involved in that selection.”