Dutch prosecutors investigating the crash of Malaysia Airlines flight MH17 believe the aircraft might have been shot down from the air but that a ground-to-air missile attack is more likely, a senior prosecutor said in a German media interview.

The Russian government has always said it has radar imagery proving the fully laden Boeing 777 was shot down by a Ukrainian military aircraft flying in its vicinity, but Western officials have never publicly accepted this scenario.

In an interview published by German news-magazine Der Spiegel on Monday, prosecutor Fred Westerbeke said the Dutch would ask Moscow to provide the information that had led them to believe a Ukrainian aircraft was nearby. “Based on the information available, a shooting-down by a ground-to-air missile is the most likely scenario, but we aren’t closing our eyes to the possibility that it could have happened differently,”

Der Spiegel quoted him as saying. “We are preparing a request to Moscow for information … including the radar data with which the Russians wanted to prove that a Ukrainian military jet was nearby,” he added.

In the days after the crash, the United States said it had evidence proving that the aircraft was brought down by a ground-to-air missile fired by Russian-backed forces occupying the area in eastern Ukraine where its wreckage now lies.

An interim report issued by the Dutch Safety Board, which investigates air crashes, listed several passenger jets in flight MH17’s vicinity, but no military aircraft that would have been capable of shooting it down. The fully loaded Boeing 777 airliner crashed over eastern Ukraine on July 17, killing all 298 people on board, more than two-thirds of whom were Dutch citizens.

Dutch authorities leading the international investigation of the crash have come under fierce criticism in the Netherlands in recent weeks from relatives of victims and lawmakers who say not enough progress has been made in identifying the perpetrators.

And see this Reuters report, dated Oct 28, explaining that U.S. military officials are continuing to refuse to pass over to Dutch investigators their radar records of the flight of MH17 on July 17, 2014. 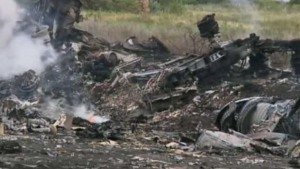