By Ivan Katchanovski, published on his Facebook page, Dec 8, 2015

The U.S. vice-president has again visited the Maidan massacre memorial in Kyiv, on December 7.  (Video report here by Reuters.) 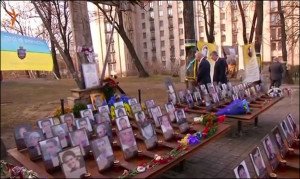 The U.S. government continues to attribute publicly the Maidan massacre to the previous government, with no questions raised about the failures of the official investigation and about various evidence of involvement of far right and oligarchic parties in this mass killing.

U.S. officials have de facto admitted that the official Ukrainian investigation, which attributed the Maidan massacre of the absolute majority of the protesters to Berkut policemen on the ground, was falsified and that the U.S. government knows this. The U.S. ambassador showed Biden that snipers were in surrounding buildings. But the New York Times report and videos [text below] from this visit omit this crucial information and do not indicate which buildings the ambassador referred to:

“Imagine what it was like,” Geoffrey R. Pyatt, the American ambassador, could be heard telling Mr. Biden. He pointed to surrounding buildings. “Snipers up on the buildings there.”

KIEV, Ukraine – The United States will not sacrifice Ukraine in pursuit of Russian cooperation in Syria, Vice President Joseph R. Biden Jr. assured Ukrainian leaders on December 7, even as the Obama administration tries to manage complicated diplomacy with Moscow.

Opening a two-day visit, Mr. Biden told the Ukrainians that the United States still supported them in their conflict with pro-Russian separatists, and accused President Vladimir V. Putin of Russia of violating a cease-fire agreement reached in Minsk, Belarus. To reinforce American backing, Mr. Biden promised another $190 million in aid.

“The United States stands firmly with the people of Ukraine in the face of continued – and I emphasize continued – aggression from Russia and Russian-backed separatists,” he said. “Minsk cannot succeed if Russia does not fulfill its commitment and President Putin fails to live up to the promises he has repeatedly made to my president, to you and to the international community.”
Ukrainian officials have been nervous about what Russia’s renewed interest in the Middle East would mean for their country. American officials interpret Russia’s intervention in Syria as an attempt by Mr. Putin to distract world attention from the Ukrainian conflict, break out of the isolation the West has tried to impose on Moscow and weaken international resolve to maintain sanctions.

President Obama has insisted that the situations in Ukraine and Syria are separate, and he sent Mr. Biden to drive that point home. Even if Washington and Moscow cooperate to settle the Syrian civil war and battle the Islamic State, Mr. Obama has said, it would not stop the West from maintaining pressure on Russia over Ukraine. The European Union likewise appears poised to renew sanctions on Russia next week.

Michael A. McFaul, Mr. Obama’s former ambassador to Russia, said the Ukrainians should be reassured. “Vice President Biden’s trip to Kiev sends a clear message that the United States is not willing to trade Ukraine for Russian cooperation on Syria,” he said in an email. “That kind of linkage never works,” Mr. McFaul said.

Mr. Biden also used his trip to press President Petro O. Poroshenko and Prime Minister Arseniy P. Yatsenyuk to put aside their differences and do more to battle corruption, arguing that the country has an opportunity to get its own house in order while Russia is focused on the Middle East.
Mr. Poroshenko was elected in 2014 after a pro-Moscow government was driven from office by mass protests that were met with violence. But he has yet to break the system of control wielded by powerful magnates over Ukrainian politics and economics.

While he has taken some steps, including the creation of a new police force and a move to install independent management of the state-owned energy company, critics said he has so far failed to make enough structural change. The president is fighting with Parliament over the prosecutor general, whom some lawmakers see as unwilling to tackle corruption.

Moreover, friction has grown between Mr. Poroshenko and Mr. Yatsenyuk, who hail from different parties and are struggling in a constitutional system that makes the division of power between their offices sometimes unclear. While American officials view both men as reformers, each has his own clan to protect and neither has been willing to abandon that as long as the other does not. Western officials believe the two may need to overhaul the cabinet to make a fresh start.

“Unfortunately the current cabinet is one of the most corrupt in the history of Ukraine,” former Prime Minister Yulia V. Tymoshenko, an advocate of reform who has turned increasingly populist lately, said in an interview. “Preservation of the bad status quo is what’s losing Ukraine as a viable state.”
Without taking sides, Mr. Biden met separately with Mr. Poroshenko and Mr. Yatsenyuk to press them to work together. American officials said the vice president warned them that the Ukrainian public was growing frustrated at the pace of reform and warned them “don’t squander this opportunity,” as one official put it.

“Future generations of Ukrainians will look back at this moment,” Mr. Biden later told reporters, with Mr. Yatsenyuk at his side. They will ask about their leaders, Mr. Biden said, ” ‘Did they deliver for us? Did they fundamentally change the nature of my country or did they not?’ History will be a very, very harsh judge.”

Mr. Yatsenyuk assured Mr. Biden that he got the message and cited various reforms he wanted to push through, including privatizing state enterprises and fighting corruption. “We understand our responsibilities, our obligations,” he said.

Mr. Biden underlined his point by meeting with what his office called a “reformers’ round table” of government officials, lawmakers and advocacy group leaders, and he will make some of the same points again on Tuesday when he addresses Parliament.
“Vice President Biden’s most important challenge in Ukraine is to keep the president and prime minister on a common, unequivocal path of reform that shows Ukraine is helping itself and merits the world’s support,” said Carlos Pascual, a former American ambassador to Ukraine. “With Russia recapturing a leadership role in the Middle East, Ukraine cannot give the world an excuse to forget Ukraine.”

During his travels around Kiev on Monday, Mr. Biden visited a monument to people who were killed during the pro-Western demonstrations in Maidan Square that led to the ouster of President Viktor F. Yanukovych. Mr. Biden tried to visit the monument last year, but had to cancel at the last minute when an unruly group of protesters unnerved his security detail.

Somber-faced and coatless on a brisk day, Mr. Biden viewed a display of about 100 photographs of slain protesters, along with candles, bouquets of flowers and banners with tributes to the victims. “Imagine what it was like,” Geoffrey R. Pyatt, the American ambassador, could be heard telling Mr. Biden. He pointed to surrounding buildings. “Snipers up on the buildings there.”

Mr. Biden left a commemorative vice-presidential coin at the base of an elaborately carved wooden cross at the monument.