‘Double genocide’ and the whitewashing of Hungary’s fascist past

Not just a phase 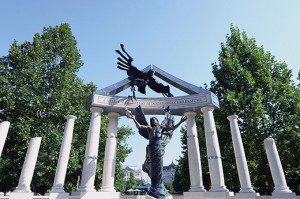 This summer, a new monument appeared in Budapest’s Liberty Square. Amid a copse of truncated white marble pillars stands the metal figure of a slender young man. Wrapped from hips to feet in windswept drapery, he opens his arms to the sky. In his right hand he bears the orb of political authority surmounted by the Hungarian double-barred cross. Wings sprout from his shoulder blades. His expression is one of seraphic tranquillity, which is odd, because swooping down on him is a monstrous eagle bolted together from shards of gleaming black metal, its features convulsed into a mask of malevolence, its talons poised to snatch the orb. The young man is the archangel Gabriel, newly engaged as patron and symbol of the Magyar nation. The eagle (though it bears an uncanny resemblance to the bird that decorates the German Bundestag today) represents Nazi Germany. The monument commemorates the German invasion of Hungary in March 1944…

The monument portrays the Hungarian nation, represented by an angelic figure, as the hapless ‘victim’ of Nazi violence. In fact, Hungary was one of the chief beneficiaries of Axis policy. Under the First Vienna Award of 1938, Germany and Italy presented Hungary with territory in Czechoslovakia and Subcarpathia. In 1939, the Hungarian army occupied the rest of Subcarpathia and part of eastern Slovakia. Following the Second Vienna Award of 1940, Hungary reclaimed Northern Transylvania, lost under the terms of the Trianon Treaty, and later joined in the invasion of Yugoslavia, securing yet more territory. On 27 June 1941, five days after the German invasion of the Soviet Union, the Hungarian prime minister László Bárdossy declared that a state of war had ‘occurred’ between Hungary and the Soviet Union and the country entered the war on the side of the Axis…

This essay is available to subscribers of the London Review of Books. You can register for free for access to the article and 24 hours of access to the entire LRB archive of over 12,500 essays and reviews. Go to this weblink: http://www.lrb.co.uk/v36/n22/nora-berend/not-just-a-phase.

See also:
* Budapest autumn: hollowing out democracy on the edge of Europe, by Ian Traynor in Kishantos, The Guardian, Oct. 29, 2014
Right wing prime minister Viktor Orbán is using his huge electoral majority to rewrite the rules, and not just for Hungary

* Hungary considering mandatory drug tests for children, politicians and press, by Associated Press, in The Guardian, Dec. 8, 2014
MPs from ruling Fidesz party back plan for yearly tests between ages 12 and 18 to ‘protect children and help fight drug trafficking’ . The measure would also apply to politicians and journalists.