Yesterday, the President of Ukraine, Petro Poroshenko, introduced to the Ukrainian parliament constitutional amendments for special status for Donbas. 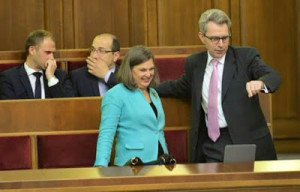 Assistant Secretary of State for European and Eurasian Affairs Victoria Nuland and U.S. Ambassador to Ukraine Geoffrey Pyatt in Ukraine Rada on July 16, 2015

The amendments were introduced during a visit to Ukraine by U.S. Assistant Secretary of State for European and Eurasian Affairs Victoria Nuland, who, along with U.S. Ambassador Geoffrey Pyatt, was present of the floor of the Verkhovna Rada when the ammendments were voted.

Nuland said that the constitutional amendments made by Kiev suggest that Ukraine has fulfilled its obligations under the Minsk Agreement. According to her, at a meeting with President Poroshenko, they discussed the importance of Ukraine’s compliance with its obligations under the Minsk Agreement. She paid particular attention to the need for legislative recognition of the special status of Donbas. In her opinion, this is necessary for the restoration of peace and territorial integrity in eastern Ukraine.

The special status of Donbas will be “the answer to any question about Ukraine’s compliance with the Minsk-2 agreement,” she said.

Political analyst Victor Shapinov notes that constitutional changes in Ukraine require a minimum of 300 votes of the Rada deputies out of 450, whereas the draft proposed by Poroshenko received only 288 votes. It will now be sent to the Constitutional Court for examination.

Victor Shapinov: So the case drags on. The law itself was enacted under unprecedented pressure from the United States. Victoria Nuland personally came to the Parliament to conduct the ballot – an unprecedented case even for puppet regimes in the past such as South Vietnam. The United States, and even more so the EU, has already “got” the situation where the Kiev regime is defiantly not fulfilling the Minsk agreement [of Feb. 17, 2015]. On the other hand, the Kiev regime, under the dictation of the United States, “complied” in such a way that Donbas can under no circumstances accept it. Once again there is an impasse – which probably suits the Washington strategists. 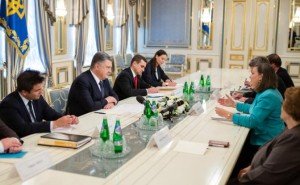 Victoria Nuland meeting with Ukrainian president on July 16, 2015 (photo by TASS and press service of the president of Ukraine)

The Russian media response is surprising, with some beginning to say that Poroshenko’s proposal is exactly what the Donbas republics sought. In fact, the population of the republics initially demanded at least federalization of the country, and then voted in a referendum for complete independence from Ukraine and the creation of their own state.

Svobodnaya Press: The adopted amendments really look like a mockery of Minsk, which is recognized in Donetsk and Lugansk, and in Moscow. What do you think?

VS: The same. Even Poroshenko said that his proposals do not provide for special status for Donbas and the “additional provisions for the peculiarities of local self-government in some areas of eastern Ukraine.” This is a direct mockery of the spirit and letter of the Minsk accords.

Kiev’s maneuver is obvious — to simulate compliance with Minsk but, in fact, leave no chance for the Donetsk and Lugansk People’s Republics to agree to its proposals. It is an attempt to shift responsibility for the escalation of the war onto the republics and put Russia in an awkward position: either Moscow abandons the republics to Kiev under unacceptable conditions, or it becomes responsible for a new round of war.

However, the Kiev authorities have not taken into account that the tail can’t wag the dog. Or if so, not for long. Kiev’s European senior partners have repeatedly expressed dissatisfaction with the collapse of Minsk-2. Now Washington is unhappy with its satellite. And they don’t hesitate to show this openly. Before our eyes Kiev goes from being a convenient tool in the hands of the West to an inconvenient one. They shame Kiev. And from this it is only one step to withdrawal of support, which the Kiev regime clearly would not survive.

SP: They speak of completely unprecedented pressure on Kiev from the West to adopt this decision. Why now?

VS:  Washington is now talking about the need for cooperation with Russia on the situation in Syria and the Middle East as a whole. Apparently, by “turning up the heat” on official Kiev, they are trying to show Moscow that an agreement is possible, that for the U.S., the Ukrainian conflict is not so fundamental and they are willing to compromise. Another thing is that any compromise will be rotten.

SP: Is the adoption of the amendments connected with the intensification of fighting in Donbas?

Quite the opposite. They were training and preparing the intensification of hostilities. Now the United States showed that they can rein in their satellite if necessary. They demonstrate their control over Kiev in tradeoff with Russia.

SP: Will the adopted amendments complicate the standoff with the authorities, provoking another coup by ultra-right radicals?

So far, since Mukachevo, the so-called radicals have demonstrated very limited resources for mobilization. Without the support of the Ukrainian oligarchy and a “signal” from the West, they hardly dare to do anything serious. The United States continues to support Poroshenko, and the EU follows in their footsteps in this regard. The “radicals,” the Nazis, are only a tool of the oligarchy for suppressing street opposition and dissent. No one takes them seriously as contenders for power — at best, merely as junior partners. [End interview segment with Victor Shapinov.]

Ukrainian journalist Andriy Manchuk stresses that yesterday’s events in Parliament showed that the foreign policy of Ukraine is dictated from outside — and, moreover, no one considers it necessary to conceal this fact from the public.

Andriy Manchuk: Nuland and Pyatt put direct pressure on the ruling coalition to force them to inscribe in the constitution a new version of the special status for the Donbas territory outside Kiev’s control. Of course, it looks like a humiliation for Ukraine’s national dignity, as with some of the Latin American “banana republics” of the last century — even though Latin American society usually responds much more forcefully to such cynical external dictates. One can be sure that the nationalist rhetoric adopted by the regime is a cover for our country’s loss of sovereignty – even many of its ideological supporters are now becoming aware of that.

Internal policies of Ukraine are determined from the outside — across the full spectrum of major important political and economic issues. And it’s not the Kremlin’s doing.

SP: Adoption of the amendments comes amidst the government’s conflict with the radicals in the west. Is there a connection between these events?

The conflict with the ultra-right, combined with the fact that Poroshenko was unable to hold a vote on the Donbas without the personal intervention of U.S. politicians and diplomats, really shows that the government does not control fully the situation in Ukraine. Another thing is that it fully coincides with the traditional political line of the U.S. State Department, which always seeks to act as an external arbiter between political forces weakened by internal conflicts in countries dependent on the U.S.

SP: Why did the U.S. suddenly decide to put pressure on Poroshenko?

The reasons that the United States forced the Ukrainian parliament to take yesterday’s decision likely has a complex character — that is, it’s determined by different aspects of  U.S.-Russian relations on a wide range of issues, from the Iranian and Syrian issue to behind-the-scenes dialogue on the Ukrainian problem. Both sides are maneuvering in the context of an acute conflict, and are very far from ending the war – as shown by the escalated fighting at the front.

First, despite the fact that most citizens of Ukraine are waiting for peace, the politicians of the ruling coalition, as well as officials and businessmen who profit from this war — not to mention their clientele from among far-right militants, “civil society activists” and pro-government media — are categorically not interested in ending the conflict. And they will do all they can to make it last as long as possible.

Second, external political forces that define our country’s policies also see the special status as something very vague that could be disavowed at any time, no more than a political bargaining chip, where the conditional “carrot” balances the “stick” of the proposed tribunal for Boeing [the Malaysian Airlines crash of July 17, 2014].

SP: Do you see any non-military solution to the conflict? The media often write about the prospects of a Transnistrian or Bosnian scenario…

Donbas is not Bosnia or Transnistria, and the economic and political situation in Europe and around the world today not at all similar to the situation in the early ‘90s. Peace is possible in the Donbass — the only question is, how many months or years of war separate us from it, and will this conflict be a prelude to more global shocks? I do not think Washington, Brussels or Moscow know the exact answer to this question. [End article.]

… Poroshenko told parliament that the new law “cannot and will not introduce a special status for the Donbas, as some news outlets have reported today” Ukrainskaya Pravda reports. “Ukraine will remain a unitary state,” he added.

However, the Ukrainian leader did add that the change opens for the possibility of local authorities throughout the country claiming more power. This would apply to Donetsk and Luhansk, as it would to other regions, as well as areas in the two regions not under control of the government at present.

*  Ukrainian law on local elections has nothing to do with the DPR – Pushilin, Donetsk News Agency, July 15, 2015 (full text of article follows)

The Ukrainian parliament endorsed on July 14 a law on local elections, but it has nothing to do with the Donetsk People’s Republic, said Deputy Chairman of the People’s Council of the DPR, Denis Pushilin, yesterday.

“Everything going on in the Rada is an internal affair of Ukraine and has nothing to do with the Donetsk People’s Republic,” he said.

“They hold their own elections, and we hold ours. Ukraine has practically excluded itself from the dialogue on the essence of political settlement. The law on local elections, enacted yesterday, as well as tomorrow’s voting in regard to constitutional reform, are beyond the framework of the Minsk process and hereby do not concern us.”

“Local elections will be held in the DPR on October 18, as already reported, and they will be held in accordance with the Sset of Measures for the Implementations of the Minsk Agreement,”  Pushilin stressed.

Pushilin is the representative of the Donetsk People’s Republic at the contact group for implementation of the Minsk-2 ceasefire agreement signed in Belarus on Feb. 17, 2015.

Proposed amendments to the Ukrainian constitution do not meet the principles of the Minsk-2 ceasefire agreement. Point 11 of the agreement requires Ukraine to agree on constitutional reform with the heads of the Donetsk and Lugansk People’s Republics. This has not been done. The proposed constitutional amendments by President Poroshenko and Rada Chairman Groisman were not even presented to the Minsk-2 Contact Group and the working group on political issues.

Back in May, we put forward official proposals to consolidate the special status of the Donbas in the Constitution of Ukraine. Kiev completely ignored us.

Meanwhile, the Minsk-2 package of measures calls for a permanent law on the special status.

For us, of course, all these tricks byKiev are unacceptable. We will insist on detailed wording of special status, to be placed directly in the main text of the Constitution of Ukraine. The special rights of Donbas must be enshrined in the Constitution of special rights of Donbas; first of all, the right of equal contractual relations with the Kiev authorities.

I would advise Poroshenko to withdraw the amendment and start an approval process to include the OSCE, Russia and us.

I recommend that the Rada deputies do not vote today as recommended because it would be a waste of time.

*  Text of Article 11 of Minsk-2 Ceasefire Agreement: (on Wikipedia)

The following measures are to be included in the Ukrainian law “On temporary Order of Local Self-Governance in Particular Districts of Donetsk and Luhansk Oblasts”: