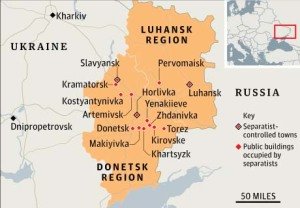 On June 12, the authorities of the Donetsk and Lugansk People’s Republics published their political programs. The governments of the DPR and LPR promise within the next two years to hold elections to a Supreme Soviet; to set in motion a thorough modernisation of industry; to nationalise Ukrainian state property and enterprises belonging to oligarchs; and to create a union state with Russia.

The programs also stress that relations with Ukraine, as with other states, will be constructed on a basis of agreement. Meanwhile, the authorities of the DPR and LPR intend to continue “repelling the aggression of the Kiev regime” in order to maintain the sovereignty of the “new states” and to ensure the safety of their citizens.

An important place is assigned to bringing local legislation, along with the legal, economic and social systems, into line with those that operate in Russia. The programs take note of the need for a transition to Russian standards in the areas of education; the functioning of the armed forces and law enforcement organs; and also in the area of production standards.

The DPR “will establish, together with Russian enterprises and official organs, conditions for simplified access by entrepreneurs to the Russian market.” This year alone, it is proposed to increase exports of products to the Russian Federation by $300 million.

Enterprises belonging to Ukrainian oligarchs and to the Ukrainian state will be nationalised. They will then in part be privatised, and according to the text of the document, Russian business will be able to take part in the privatisation.

“With regard to economic policy,” the Director of the Moscow-based Institute of Globalisation and Social Movements (IGSO) Boris Kagarlitsky commented, “the document declares that nationalisation is impending, despite the fact that just a few days ago [DPR leader] Boroday said that the assets of [Ukrainian oligarch Rinat] Akhmetov would not be nationalised

“Meanwhile,” Kagarlitsky continued, “the reference to future nationalisations is extremely ambiguous. Enterprises belonging to Ukrainian oligarchs and to the Ukrainian state are to be nationalised. But a proportion of these enterprises will then be privatised, with Russian business able to take part in the privatisation.

“Which proportion? Under what rules? There is no explanation. This can be read as meaning that the government of the DPR is about to seize the property of Ukrainian oligarchs simply in order, later on, to hand it over to Russian ones. But the same text can also be read in quite contrary fashion: only a part of the nationalised property will be privatised, and the rest will remain the property of the republic. Considering that at present all large businesses belong to oligarchs or to the Kiev state, this suggests a conclusion that a sweeping nationalisation is needed, after which some enterprises might in fact have to be reprivatised.

“Which of these two interpretations is correct? Neither. Different groups, counterposed to one another, are represented in the leadership of the republics. In an attempt to satisfy everyone and forestall ‘premature’ conflicts, and also to avoid excessive panic in Moscow over nationalisations in Donetsk and Lugansk, ambiguous formulations are being adopted. It’s impossible to predict how things will work out in the republics themselves. Clearly, though, the various leaders won’t be able to sit forever between two stools. At a certain stage they’re going to have to take clear, definite decisions, and not everyone is going to like this. Including in Moscow.

“The real outcome, however, won’t depend on Moscow,” Kagarlitsky concluded. “Nor will it even depend on particular leaders in Donetsk and Lugansk.

“Crucially, it will hang on the relationship of forces within the movement, on the development of the struggle, and not least, on how events develop within Russia itself.”