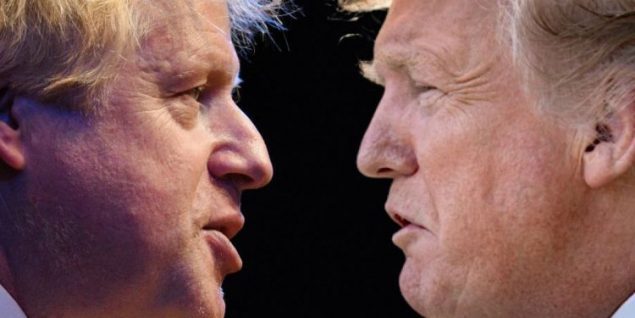 “By any means necessary” is the slogan used in 10 Downing Street to describe UK prime minister Boris Johnson’s approach to Brexit. The same phrase encapsulates Donald Trump’s approach to re-election in 2020.

The consequences of this attitude to government became clear last week, as rule-of-law crises broke out on both sides of the Atlantic. In the UK, the Supreme Court ruled 11-0 that the Johnson administration had acted unlawfully in suspending parliament. On the same day, an impeachment inquiry began against the US president, prompted by a whistleblower’s claim that Mr Trump pressured the government of Ukraine to dig up dirt on his political opponents.

These concurrent crises are more than a coincidence. They are signs that the laws and conventions that underpin liberal democracy are under attack in both the UK and the US, two countries that have long regarded themselves as democratic role models for the world. In normal times, a British or American government would have responded to the legal blows dealt to them last week with caution, restraint — and even contrition. But those days are gone. Instead, the Trump and Johnson camps are whipping up their supporters to believe that their legal problems are an act of revenge by political enemies intent on thwarting the will of the people.

Mr Johnson has combined a pro forma acceptance of the court ruling with a claim that the Supreme Court judges were wrong (all 11 of them). His allies continue to splutter that the court is made up of metropolitan Remainers. Questioning the independence of judges has long been part of Mr Trump’s rhetoric. During the 2016 election, he suggested that a Mexican-American judge would inevitably be biased against him because of his stance on immigration.

Contempt for the rule of law is baked into the “by any means necessary” approach to politics. In the UK, the Johnson adviser who adopted the motto is Dominic Cummings, who in a rambling blog post this year expressed his frustration that, in government, “discussions are often dominated by lawyers” — and that these killjoys often deemed his bright ideas “unlawful”.

Once you have asserted that the end justifies the means, then any tactic is logically permissible. It is telling that “by any means necessary” was a slogan originally adopted politically by Malcolm X, the African-American activist of the 1960s, who was frustrated by the non-violent methods of the civil rights movement. The implied threat of violence is already part of the Trump-Johnson playbook. After MPs complained last week that the prime minister’s language was encouraging attacks on politicians, Mr Cummings’ response was that it is unsurprising people are angry and that the best way to soothe their righteous anger is to get Brexit done. Mr Trump has said that the whistleblower in the Ukraine case is “almost a spy”, and suggested he should be handled as “in the old days, when we were smart” (in other words, executed). In the past, Mr Trump has encouraged crowds at his rallies to rough up protesters.

The political arguments made by both the Johnson and Trump administrations use the language of democracy, but the underlying logic has more in common with populist authoritarianism. For Mr Johnson, the narrow Brexit referendum victory of 2016 trumps all the other constraints that operate in a democratic society, including the law, the truth and the will of parliament and its elected representatives.

Mr Trump has even less regard for the idea that democracy comes with checks and balances. His sense of himself as the tribune of the people is fed by his own ego and the devotion of his supporters. He once said that he could shoot somebody on New York’s Fifth Avenue, without losing votes.

When leaders such as Mr Johnson and Mr Trump claim a direct mandate from the people, then the other institutions of a democratic society can be treated with contempt, and even threatened with violent retribution at the hands of the people. America has been moving down this populist-authoritarian road ever since Mr Trump entered politics. Britain lagged behind for some time, under the more conventional and honourable leadership of Theresa May. But a cornered and unscrupulous Mr Johnson has now imported Trumpian politics to the UK.

All is far from lost. The decisions of the UK Supreme Court and the House of Representatives last week demonstrated that, in Britain and America, the law remains a formidable restraint on leaders with authoritarian instincts.

But this is just one stage in the battle. The Johnson-Cummings strategy is to get to an election and then fight it on a “people against the establishment” ticket. Mr Trump will wage a similar campaign in 2020.

Facing divided, radicalised and unconvincing political opponents, the Trump-Johnson strategy could yet triumph. That strategy, it should now be clear, involves contempt for the rule of law, the trashing of national institutions, fostering an atmosphere of violence and deliberately widening bitter divisions within the country.

Until recently, Britain and America could serve as genuine inspirations to liberals around the world, showcasing what a law-governed democratic system should look like. The degeneration of liberal democracy in its Anglo-American heartlands will, sadly, have a global impact.