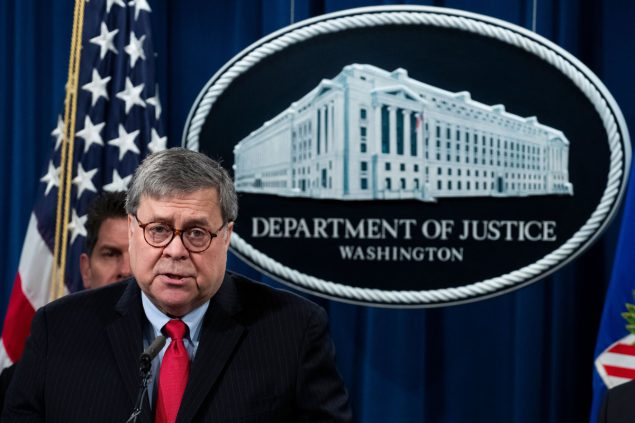 The Trump Department of Justice has asked Congress to craft legislation allowing chief judges to indefinitely hold people without trial and suspend other constitutionally-protected rights during coronavirus and other emergencies, according to a report by Politico’s Betsy Woodruff Swan.

While the asks from the Department of Justice will likely not come to fruition with a Democratically-controlled House of Representatives, they demonstrate how much this White House has a frightening disregard for rights enumerated in the Constitution.

The DOJ has requested Congress allow any chief judge of a district court to pause court proceedings “whenever the district court is fully or partially closed by virtue of any natural disaster, civil disobedience, or other emergency situation,” according to draft language obtained by Politico. This would be applicable to “any statutes or rules of procedure otherwise affecting pre-arrest, post-arrest, pre-trial, trial, and post-trial procedures in criminal and juvenile proceedings and all civil processes and proceedings.” They justify this by saying currently judges can pause judicial proceedings in an emergency but that new legislation would allow them to apply it “in a consistent manner.”

But the Constitution grants citizens habeas corpus which gives arrestees the right to appear in front of a judge and ask to be released before trial. Enacting legislation like the DOJ wants would essentially suspend habeas corpus indefinitely until the emergency ended. Further, DOJ asked Congress to suspend the statute of limitations on criminal investigations and civil proceedings during the emergency until a year after it ended.

Norman L. Reimer, executive director of the National Association of Criminal Defense Lawyers, told Politico the measure was “terrifying,” saying, “Not only would it be a violation of [habeas corpus], but it says ‘affecting pre-arrest.’ So that means you could be arrested and never brought before a judge until they decide that the emergency or the civil disobedience is over. I find it absolutely terrifying. Especially in a time of emergency, we should be very careful about granting new powers to the government.”

“That is something that should not happen in a democracy,” he added.

DOJ also asked Congress to amend the Federal Rules of Criminal Procedure to have defendants appear at a hearing via videoconference instead of in-person with the defendant’s consent, although in a draft obtained by Politico, the sections about requiring consent were crossed out. But it’s not just Americans’ rights the DOJ wants to violate. They also asked Congress to pass a law saying that immigrants who test positive for COVID-19 cannot qualify as asylum seekers.

As coronavirus spreads through the country, activists are calling on politicians in office to release prisoners and immigrants held in detention centers, both of which can be a hotbed of virus activity with so many people in close quarters and limited or non-existent supplies of soap, sanitizer, and protective equipment. Some states have already begun to do so. But with this, the Trump administration is taking steps to hold more people in prisons for an undetermined amount of time — showing their priority is not saving lives but giving themselves more power.