‘The Displaced Ukrainians: Who Are They And What Do They Think?’

March 27, 2017
By Gwendolyn Sasse, published March 2017 by the Centre for East European and International Studies (ZOiS) (20 pages). Enclosed is the executive summary as well as key excerpts.

The survey was conducted in November and December 2016 by the Centre for East European and International Studies (ZOiS).

2016 provides the first comparative data on the attitudes and identities of the people displaced by the war in Eastern Ukraine both within Ukraine and to Russia. The main results from this survey are: 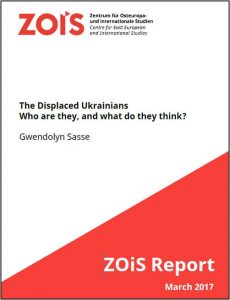 * The majority of the internally and externally displaced intends to stay where they are currently based.

* The vast majority of the internally and externally displaced had family members or friends living in the locations where they are currently based , and they remain in close contact with family members and friends in the war zone.

* A  higher  share  of  the  displaced  in  Russia  reports  being  in  full -time employment; the mean income of the displaced in Russia is significantly higher than that of the internally displaced who report greater reliance on state support.

* The effect of war and displacement on personal identities has been mixed: an increased identification as “Ukrainian” or “Russian” is counterbalanced by an increase in mixed identities (“both Ukrainian and Russian”).

Read the full report (20 pages) at the weblink above or at the pdf attachment to this posting.

Gwendolyn Sasse is the author of 2002 book ‘Ethnicity and Territory in the Former Soviet Union’, listed here.

By summer 2016 the Ukrainian Ministry for Social Policy had registered close to 1.8 million internally displaced people (IDPs) inside Ukraine. About another one million have fled from the conflict zone to the Russian Federation.

Since 2015, Ukraine has been among the ten countries with the largest IDP population worldwide.

One finding that might come as a surprise to the Ukrainian and Russian authorities is that the majority of the displaced intend to stay where they are based at the moment – more so in Russia (about 80  per cent), but also in Ukraine (about 65  per cent).

Only 14  per cent of the respondents in Russia declare that they are receiving state support, compared to 66  per cent in Ukraine.

Asked generally, whether their identity has changed as a result of the events 2013 to 2016, just over 50  per cent said they felt “more Russian” now but interestingly, close to 30  per cent said they felt more strongly than before that they were “both Russian and Ukrainian”. Among the internally displaced, half the respondents reported an identity shift – and the other half did not. Just over 30  per cent of the IDPs stated that they now felt “more Ukrainian”, and 15  per cent felt more strongly that they were “both Ukrainian and Russian”.

There is a marked difference in the trust the displaced have in “their” political leaders: an overwhelming majority of over 90  per cent of the respondents in Russia “generally” or “rather” trust the Russian president – a sharp contrast to only about a third of the IDPs in Ukraine trusting the Ukrainian president.

Who Are The Displaced in Ukraine, by Gwendolyn Sasse, March 2017