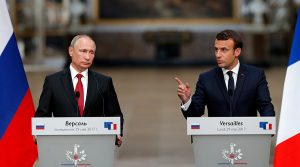 Speaking at a press conference after talks with Russian President Vladimir Putin in Versailles on Monday, May 29, Macron explained his team’s decision to deny RT and Sputnik accreditation during his campaign, branding the media outlets “propaganda.” 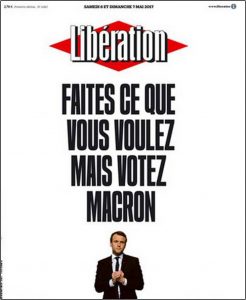 Front-page headline of French daily, Liberation – ‘Do what you want, but vote for Macron’

That statement, however, ignited a storm of social media comments on “propaganda tools”.

People were quick to note that the day before the second round of the French presidential elections earlier in May, the cover of the Liberation newspaper called on voters to cast their ballots for Macron.

The paper’s weekend edition, which came just as the pre-election ban on reporting went into effect, read: “Do what you want, but vote for Macron.”

“When Macron says that RT and Sputnik are propaganda tools, I remember once again this Liberation [front page],” one person wrote.

“‘RT and Sputnik acted like propaganda tools’, said the one who was created by media propaganda,” another wrote, referring to the new French leader.

Some Twitter users were quick to remind that owners of large French newspapers and magazines are Macron’s “billionaire friends.” “Your media billionaire friends made your election campaign: Le Monde, Le Point, L’Obs, BFM,” one person wrote…


Macron accuses RT and Sputnik of ‘behaving like deceitful propaganda’, RT.com, May 29, 2017

In his latest attack on RT, French President Emmanuel Macron said the news outlet’s correspondents were not “real journalists.” Some of the people he dismissed as non-professionals deliver reports while under threat from bombs and bullets.

Macron, who stonewalled RT during his election campaign, justified his attitude by accusing the channel of spreading falsehoods about him. He failed to provide any examples, however…

For Macron’s benefit, here are some of RT’s “non-journalists”…

Macron leads war on ‘deceitful propaganda’ against RT – but #ZeroFactsGiven, commentary by Robert Bridge, RT, May 29, 2017

Chechnyan leader invites Macron to ‘search for truth’ in Chechnya after attacks on RT, RT.com, May 30, 2017

Background:
*  Latest anti-Russia propaganda: ‘Torture centers of homosexuals’ in Chechnya, by Roger Annis, New Cold War.org, May 12, 2017
*  The Intercept gives favorable spin to Emmanuel Macron’s attacks on Russian media, May 29, 2017  [including an assertion by the writer of “brutal treatment of members of the LGBT community in the Russian republic of Chechnya” using as proof a six-week old article by anti-Russia Guardian correspondent Shaun Walker]