Korrespondent newspaper in Ukraine is reporting disastrous results for production and repair of armoured military vehicles by manufacturing and repair enterprises in the country. 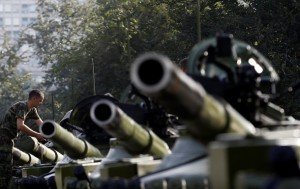 As reported by the newspaper from a letter by Ukrainian General Staff, Ukrainian military equipment plants did not fulfill 25 per cent of planned repair work for military vehicles in the first five months of 2015. Some work contracted in 2014 has yet to be completed.

At the Zhytomir state-owned plant, for example, of 80 engine repairs for BMP infantry fighting vehicles, only eight were performed.

Of 90 repaired T-64 and BM Bulat tanks, 66 were defective. The defects relate to weapons control systems, electrical equipment and engines.

A string of directors of military enterprises have been fired or have resigned as a result of the poor performances.

Last month, President Petro Poroshenko boasted that the state-owned Ukroboronprom enterprise would rise to become one of the top five armoured vehicle producers in the world