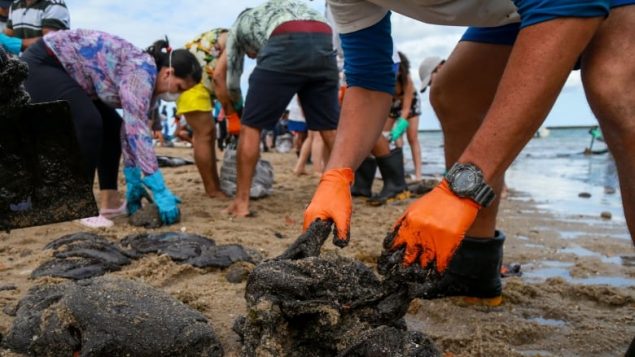 Two months into the largest spill in Brazilian history, after gutting environmental protection agencies and silencing scientific research institutes, the government can’t figure out where the oil is coming from. With 2100 km of beaches already poisoned, far right President Bolsonaro says, “the worst is yet to come.”

First he blamed the communists. Why not? As fans of Jordan Peterson and Steve Bannon, right wing extremist President Jair Bolsonaro and his corrupt sidekick Sérgio Moro love the resuscitated Nazi-trope of cultural Marxism, which provides a handy tool to label all political enemies as communists. Weeks after the oil started arriving on Northeastern Brazilian beaches, before the government had begun any serious effort to contain the spill, Sérgio Moro’s federal police found a culprit: Venezuela. It was, they said, a Greek tanker hauling oil from “communist” Venezuela that had just destroyed the tourism and fishing industries in the Brazilian northeast. However, at the same time they announced that the alleged culprit, a tanker called the Bouboulina registered with Delta Tankers Ltd, had a shipping capacity of 1 million barrels, the Federal Police estimated the total size of the spill at 2.5 million barrels. Despite the saber rattling against Venezuela, by their own admission the Bouboulina could not have been the main culprit in the spill. To further discredit Sérgio Moro’s federal police, Delta Tankers proved that the Bouboulina arrived in port and unloaded 1 million barrels of petroleum on schedule, and that there was no evidence, satellite based or otherwise, that the ship had, “stopped, conducted any kind of ship-to-ship operation, leaked, slowed down or veered off course, on its passage from Venezuela to Melaka, Malaysia.”

Two months into what may turn out to be the worst environmental disaster in Brazilian history, as Bolsonaro finally starts sending the Navy in to try to contain the spill, the government’s ideologically motivated theory that Venezuela caused it has crumbled.

Not only has the Bolsonaro government, which has a Trump-like mistrust of Science, systematically ignored all of the satellite data, it’s given a gag order to scientists. As the oil leak spun out of control, scientists in the National Space Research Institute (INPE) were ordered not to make any public statements about the disaster, because “it would make the government look like the bad guy.”

Nevertheless, researchers in the INPE (whose director Bolsonaro fired earlier this year for warning that fires were burning out of control in the Amazon) and the Satellite Imagery Processing and Analysis Laboratory of Alagoas Federal University (LAPIS) have warned that evidence points to multiple origins, including a possible drilling accident, possibly caused by one of the many foreign companies that have benefited by the post 2016 coup “price of bananas” oil reserve auctions, none of which have Petrobras’ technical know-how in deep water drilling operations. If this turns out to be the case, the oil is still coming and Brazil should brace for the worst. Recent statements by Bolsonaro himself, uttered between paranoid rants nervously denying he had anything to do with the murder of Rio de Janeiro city councilwoman Marielle Franco, uphold this thesis. “The worst is yet to come,” he said about the oil spill during an interview on Sunday night to the evangelical christian television network, Record.

According to the Brazilian Petroleum Workers Union Federation (FUP), the Federal Government has not only been ignoring scientists, its been lying to the public about the effects of the oil spill. Tourism Minister Marcelo Álvaro Antônio and Vice President Hamilton Mourão have both announced that the oil poses no risk to bathers, but scientists say otherwise. Legions of volunteers who in the absence of a coherent government response to the spill have been cleaning oil on their own are complaining of nausea, diarrhea and migraines, and at least 17 have been hospitalized. According to the FUP, the quality of information given to the Brazilian public on the oil spill is so bad that it has had to rely on conflicting information in the media.

Among the largest beneficiaries of the privatization of Brazil’s offshore oil fields are: Shell, Exxon Mobil, BP,  Chevron and the Chinese company CNOOC. Could one of them be covering up a drilling accident, like BP did with the Deepwater Horizon spill in the Gulf of Mexico?