Disappointment for Ukraine: Army chief says Ukrainian army is not fighting the Russian army in Donbas 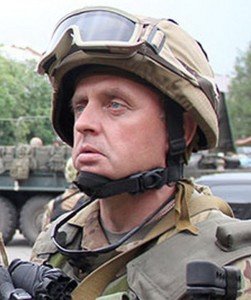 Chief of Staff of the Armed Forces of Ukraine Viktor Muzhenko

Chief of Staff and Commander-In-Chief of the Armed Forces of Ukraine (AFU) Viktor Muzhenko held a briefing on January 29 in which he told the press who Ukraine is fighting in Donbas. One of his most dramatic statements was that the AFU has “enough forces and means to carry out the final defeat” of Donetsk Peoples Republic and Luhansk Peoples Republic militias. Ukraine’s Channel 5 cites General Muzhenko:

As of today, we only encounter individual members of the armed forces of the Russian Federation and Russian citizens who are fighting with the illegally armed groups. Currently, we (Ukrainian army) are not engaged in combat operations against the Russian army. We have enough forces and means to carry out the final defeat of the illegally armed groups.

How can it be that Chief of Staff Muzhenko has thus disappointed hundreds of thousands, if not millions, of pro-Ukraine zombies who believe that the AFU and the Ukrainian National Guard are fighting against regular units of the Russian Army? All he mentioned was some “individual members of Armed Forces of the Russian Federation”.

If General Muzhenko continues in this same manner, then the Ukrainian “patriots” will need to prepare a trash can for him, since it is very important for them that daily tales of more and more defeats of the “Russian divisions” invading Ukraine be told. [This refers to the ongoing campaign by gangs of right-wing hooligans in Ukraine in which they have been tossing Ukrainian politicians they don’t like into trash cans.]

By the way, in one of the comments on the Channel 5 website in response to Muzhenko’s statement, a viewer urges the Ukrainian president to send the Chief of Staff of the AFU to the front as a common soldier…

[See the video of General Muzhenko’s comments here. Read a commentary on this story authored by Xavier Lerma here on Pravda.ru. Recall that on January 21, 2015 in Davos, Switzerland, Ukrainian President Petro Poroshenko charged there were upwards of “9,000 Russian military soldiers” engaged in combat on territory in eastern Ukraine.]