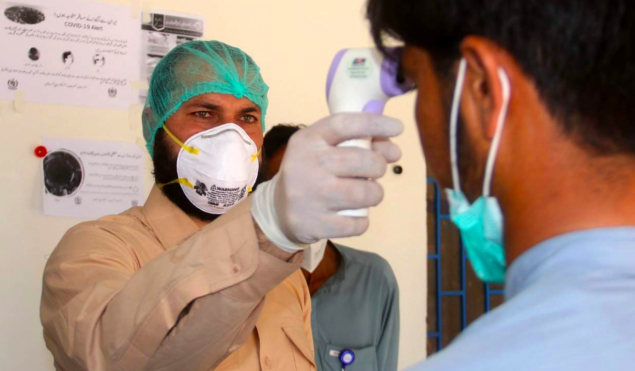 The U.S. Treasury is now allowing some humanitarian trade but it may not be enough—and the damage is already done.

The Trump administration is partially reversing course on economic sanctions that have slowed down Iran from importing coronavirus test kits as the country faces down the most deadly COVID-19 outbreak outside of East Asia.

Iranian authorities have confirmed 388 cases of the new coronavirus disease as of Friday afternoon. U.S. sanctions, the Iranian government’s record of dishonesty, and the elusive nature of the virus itself have made it difficult to understand the true extent of the epidemic.

The U.S. Treasury announced on Thursday morning that it was lifting some terrorism-related sanctions on the Central Bank of Iran, which re-opens a channel for humanitarian trade that had been closed since September 2019. The announcement does not lift the restrictions on humanitarian trade with other Iranian banks under terrorism-related sanctions.

Iran’s healthcare sector has blamed the banking sanctions for a lack of testing equipment to diagnose COVID-19. Thirty-four people have reportedly died from the virus in Iran, suggesting a large number of undiagnosed cases of COVID-19, which scientists believe has a two percent mortality rate. In fact, independent researchers estimate that eighteen thousand Iranians may have been infected already.

“Several international companies are ready to ship the coronavirus diagnosis kit to Iran, but we cannot pay them,” said Ramin Fallah, vice president of the Iranian Union of Importers of Medical Equipment, in a Monday interview with Iranian media. “They also insist that the money should only be sent through banks. Although there are ways to get around [sanctions], it is time-consuming.”

COVID-2019 first emerged in Wuhan, China in December 2019. Patients may take up to two weeks to show symptoms, according to the U.S. Centers for Disease Control and Prevention.

China, Turkey, and the World Health Organization (WHO) had promised to provide virus test kits to make up for any shortages. So far, the WHO has delivered two thousand test kits, and China will be delivering five thousand more by Friday. It is unclear if this is enough to cope with the growing number of possible cases.

“We’ve had very forty-year difficult history [sic] with the regime, but the United States, because we’ve always stood with the Iranian people, look for ways to help where we can, but people need to understand that the regime has the first responsibility to its own people, and they have failed in that responsibility,” Brian Hook, the U.S. State Department official overseeing Iranian affairs, told the National Interest at a Friday morning briefing hosted by Al Monitor.

President Donald Trump declared part of the Iranian military a terrorist organization in April 2019 as part of a campaign of maximum pressure against Iran’s economy. His administration used this declaration to list several public and private Iranian banks as terrorist entities, which removed the exemptions allowing them to pay for humanitarian goods.

The U.S. Treasury announced guidelines for foreign banks to set up their own “humanitarian channels” with Iran in September 2019. The guidelines require banks to report extensive details on every transaction, and the first humanitarian channel through Switzerland did not make a single delivery to Iran until January 2020.

Even the humanitarian exemptions may not allow Iran to import all the goods that it needs to deal with the growing epidemic. Indeed, the U.S. Treasury requires licenses to export several different medical and laboratory devices to Iran, including full face mask respirators and certain decontamination systems, and sanctions ban any sale of medical devices to the Iranian military and police.

“You can imagine that for something like medication it’s fairly straightforward what the end use is, but let’s think about hazmat suits. These are not goods that are as easily definable as humanitarian,” explained Esfandyar Batmanghelidj, founder of Bourse & Bazaar, an organization that tracks developments in Iran’s economy.

“Wherever there is a lack of really explicit clarity—and unfortunately there is a lot of gray area in terms of how the Trump administration does fail to provide clarity in terms of what is and what isn’t humanitarian trade—that means that it will be difficult for Iran to ultimately get its hands on those products,” Batmanghelidj told the National Interest.

Fallah said in the Monday interview that he was planning to travel personally to Turkey to pay for thousands of protective masks in cash.

But he did not entirely point the finger at the United States. He added that Iran’s “officials should have been thinking about supplying the kits earlier” because sanctions were a foreseeable problem, and blamed the international Financial Action Task Force blacklist, which Iran joined after failing to pass anti-money laundering legislation in February 2020, for making banking more difficult.

Iranian authorities have not inspired confidence in their current ability to deal with the outbreak transparently, either. Last month, the Iranian military covered up its own accidental shootdown of a Ukrainian jetliner, lying about the cause of the deadly plane crash to even the civilian authorities for days.

Officials have downplayed the extent of the outbreak even as the virus spreads within the government itself.

Member of Parliament Ahmad Amirabadi Farahani claimed on Monday that fifty people had died in his home district of Qom alone, but Deputy Health Minister Iraj Harirchi denied accusations of a coverup.

On Tuesday, Harirchi announced that he had contracted COVID-19.

Another lawmaker, Mahmoud Sadeghi, tested positive for the virus the same day.

But President Hassan Rouhani continued to claim that the viral panic was worse than the virus itself, denouncing “foreign propaganda,” refusing to quarantine cities, and promising a return to normalcy.

By Wednesday, the tone in the Rouhani administration turned to panic as cabinet member Ma’soumeh Ebtekar was diagnosed with COVID-19 and retired Amb. Hadi Khosrowshahi suddenly died of the disease.

Esfandyar speculated that officials have been reluctant to take more widespread quarantine measures “because they know that it will deepen the economic hardship that the country has been dealing with” under maximum pressure. “The economic impact of quarantining a city is very dramatic, and it’s going to be a significant ask of the Iranian people to go through those kinds of measures.”

“The sanctions we have imposed are the toughest ever. They are making an enormous difference,” Hook bragged at a State Department press briefing in January. “The Iranian economy this year could contract by as much as 14 percent.”