Detention of journalist Ruslan Kotsaba, charged with “treason”, extended for another 60 days

The detention of Ukrainian journalist and blogger Ruslan Kotsaba was prolonged by 60 days at a court hearing on June 3. He is being investigated for accusations of treason because of his video-appeal in early 2015 opposing the military conscription campaign of the Unkrainian government. His initial detention was due to expire on June 6. 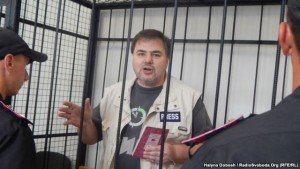 The court hearing opened with conflict between the accused and representatives of the ‘Right Sector’ fascist party members. They arrived at the courtroom with banners reading, “Out with separatism” and “The right to truth”. Kotsaba called them “clowns in camouflage”.

Judge Lesya Zelenko presided over the hearing. The judge who initially detained Kotsaba, Vladimir Popovich, has since been conscripted to the army. Zelenko is a reserve judge appointed at the very start of the proceedings against the accused.

Kotsaba appealed to the court to release him from detention. He promised not to escape bail, saying he intended to defend his actions before the public. His plea was rejected.

Ukrainian independent politician Tatyana Montyan defended Kotsaba at the hearing. She wrote afterward in her blog about a witness who testified against the accused.

“The witness testified that, as a conscious citizen, he had written a complaint to the Security Service of Ukraine about the original video appeal of Kotsaba in which he urged Ukrainians to defy the campaign of military mobilization and conscription. He claimed that more than 300 dwellers of one of the villages left for Russia as a result of Kotsaba’s video-appeal.

“He did not watch the video at first, but his son phoned him from the front and asked what was going on. The son told him that the men in the front were outraged by Kotsaba’s appeal and complained that Kotstaba was making videos while the cream of the nation was dying,. The son said that only criminals and drug addicts fight against the Ukrainian army. The army knows this because such people havew been taken prisoner. He did not mention any Russians – either regular troops or “separatist” fighters.

“The witness claimed that he would like to join the army very much, but his criminal record (he served prison term for robbery) hinders his enlistment.

“He did not communicate with any of those 300 people personally, but the relatives of the people who had left for the “aggressor-country”, Russia, in order to earn money told him that “they had seen campaigning against mobilization on TV”. Nonetheless, the witness could not recall which TV channel broadcast the video.

“Judge Zelenko asked what words, exactly, of Kotsaba induced the witness to go to the SBU. The witness said it was the words describing the dwellers of eastern Ukraine as the same sort of human beings that live everywhere else and who should not be murdered.”

Ivano-Frankivsk city court has prolonged the trial of Ruslan Kotsaby after a hearing on June 3. Hearings will resume on June 30.

During the June 3 hearing, there was a verbal altercation between prosecutors and defenders, which also involved the defendant.

The court heard five witnesses, including two military commissioners, two members of the ‘ATO’ and a volunteer witness. None of them personally know Kotsaba, but they all said they were outraged by his video earlier this year, “I refuse to mobilize”.

At the start of the hearing,  Kotsaba said that prosecutors were “intentionally delaying the process”, and “presenting witnesses just to hear them talk”.

“The number of witnesses is low, evidence of the weakenss of the charges by the SBU and the Prosecutor’s Office.”

Prosecutors announced they had questioned 58 witnesses. During three court sessions,  15 witnesses have appeared.

Kotsaba is being investigated for treason, subversion in favor of a foreign state, and deliberate actions aimed at obstructing the legitimate activities of the Armed Forces of Ukraine.

Earlier this year, Kotsaba repeatedly and publicly opposed the next wave of military conscription in Ukraine. He called for its boycott, saying that since there has been no declaration of war in Ukraine, a military mobilization is unconstitutional.


The Independent Media Trade Union of Ukraine considers the charges against Kotsaba to be unjustified. The human rights organization Amnesty International has called the Ivano-Frankivsk journalist a prisoner of conscience and called for his release.

… Meanwhile, members of the media are suffering harassment at the hands of the authorities. Among them is the journalist and prominent blogger Ruslan Kotsaba – recently named as Amnesty International’s first Ukrainian prisoner of conscience in five years. He could face more than a decade in prison on the charge of “high treason” and for his views on the armed conflict in eastern Ukraine.

Ruslan Kotsaba was arrested on 7 February in Ivano-Frankivsk, 130 km south-east of Lviv, after he posted a video describing the conflict as “the Donbas fratricidal civil war”. He also expressed opposition to military conscription of Ukrainians to take part in the conflict.

After being formally charged on 31 March with “high treason”, he faces up to 15 years in prison, as well as up to an eight-year sentence on a further charge of “hindering the legitimate activities of the armed forces”. Amnesty International has called for his immediate and unconditional release. We see his treatment as a brazen restriction on the right to freedom of expression.
The freedom to peacefully exercise that right was one of the fundamental rallying cries of the EuroMaydan protesters.