The mainstream U.S. media is all atwitter about Russia having to pay a price for hacking into Democratic Party emails and supposedly tilting the U.S. election to Donald Trump, but the evidence still is lacking. 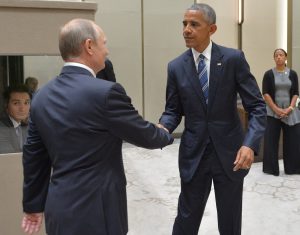 Presidents Putin and Obama meet at G20 meeting in China on Sept 4, 2016 (photo by Office of President of Russia)

Amid more promises of real evidence to come, the Obama administration released a report on December 29 that again failed to demonstrate that there is any proof behind U.S. allegations that Russia both hacked into Democratic emails and distributed them via WikiLeaks to the American people.

The New York Times, which has been busy flogging the latest reasons to hate Russia and its President Vladimir Putin, asserted, “The F.B.I. and Department of Homeland Security released a report on Thursday detailing the ways that Russia acted to influence the American election through cyberespionage.”

But the actual report fell far short of “detailing” much at all about how the disclosures of the Democratic National Committee’s manipulation of the primaries to hobble Sen. Bernie Sanders and the contents of Hillary Clinton’s Wall Street speeches ended up at WikiLeaks and ultimately became available to American voters.

Most of the 13-page FBI/DHS report was devoted to suggestions on how Internet users can protect their emails from malware, but there was little new that proved that the Russians were the source of the Democratic Party emails given to WikiLeaks.

A well-placed intelligence source told me that there’s little doubt that elements of Russian intelligence penetrated the emails of the Democratic National Committee and Clinton campaign chairman John Podesta, but the Russians were far from alone. Indeed, placing various forms of malware on computers is a common practice, as average folks who periodically take their laptops to an I.T. professional can attest. There’s always some kind of “spyware” or other malicious code to be discovered.

The source said the more debatable issue is whether Russian intelligence then turned over the emails to WikiLeaks, especially given that WikiLeaks founder Julian Assange and an associate, former British Ambassador Craig Murray, have stated that the material did not come from the Russian government. Murray has suggested that there were two separate sources, the DNC material coming from a disgruntled Democrat and the Podesta emails coming from possibly a U.S. intelligence source, since the Podesta Group represents Saudi Arabia and other foreign governments.

So, The New York Times misled its readers by claiming that the FBI/DHS report released Thursday was “detailing” how the Russians carried out the operation, and a separate Times article essentially acknowledged that the details were still to come.

“A more detailed report on the intelligence, ordered by President Obama, will be published in the next three weeks, though much of the detail — especially evidence collected from ‘implants’ in Russian computer systems, tapped conversations and spies — is expected to remain classified.”

In other words, the FBI/DHS report really didn’t have much in the way of details and the “more detailed report” – due out before President Obama leaves office on Jan. 20 – will still be hiding “much of the detail” to justify Obama’s retaliation against Russia including new sanctions and expulsion of 35 Russian diplomats or intelligence officers from the United States.

But the data purloined by these U.S. “implants” and other clandestinely obtained evidence – assuming there really is any – won’t be something that the American people will get to see.

The shell game will continue up to the start of the Trump administration with the apparent goal to hem in President Trump from trying to reach out to Russia to avert a costly and dangerous new cold war. But the evidence so far released by the Obama administration still amounts to “trust us.”

[For more on this topic, see Consortiumnews.com’s “Escalating the Risky Fight with Russia” and “Summing Up Russia’s Real Nuclear Fears.”]

We are within $5,000 of our end-of-year fundraising goal. So in the last few days of 2016, please help us get over the top. You can donate by credit card online (we accept Visa, Mastercard, American Express and Discover), by PayPal (our PayPal account is named after our original email address, “consortnew @ aol.com”), or by mailing a check to Consortium for Independent Journalism (CIJ); 2200 Wilson Blvd., Suite 102-231; Arlington VA 22201.

We also are registered with PayPal’s Giving Fund under the name ‘Consortium for Independent Journalism’. Since we are a 501-c-3 non-profit, donations by American taxpayers may be tax-deductible.

We are offering a special thank-you gift for those who can give $125 or more – or if you set up a recurring monthly donation by credit card or PayPal. You can receive a Consortiumnews’ tote bag and a signed copy of any one of my six books — Fooling America, Trick or Treason, Lost History, Secrecy & Privilege, Neck Deep, or America’s Stolen Narrative. After making your donation simply send an email to [email protected] and tell us which one of the six books you would like included in your tote bag. (Or you can send us a note by snail mail to the above mailing address.)

As always, thank you for your support.