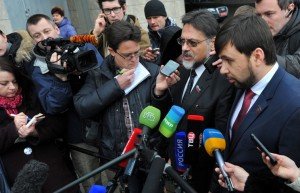 The Contact Group for Ukraine was supposed to have met in Minsk on Friday, but Ukraine’s representative at the talks, Leonid Kuchma, did not arrive.

Denis Pushilin criticized Kiev’s “incoherent position” on the next round of the Minsk talks. “The date was set for today but Kiev’s hesitation and uncertainty whether they are going to go [to Minsk] or not is making the situation maximum inconvenient for all the sides,” Pushilin stressed.

“We have met our commitments. We have arrived in Minsk while Kiev is still hesitating,” Pushilin said.

President Petro Poroshenko and Germany’s Chancellor Angela Merkel spoke on the phone on Friday discussing peace settlement in eastern Ukraine. Both leaders spoke in favour of an early meeting of the Contact Group in the Belarusian capital Minsk and urged the parties to the conflict to urgently cease fire.

Poroshenko and Merkel called for “the dialogue in the ‘Normandy format’ to be continued,” along with “withdrawal of heavy weapons and troops and in compliance with the disengagement line” .

Along with that, Poroshenko and Merkel agreed to hold a bilateral meeting in Munich on February 6-8 with the aim to coordinate further steps.

The spokesman for the Ukrainian Foreign Ministry said a document including key provisions on a ceasefire and weaponry pullback is being worked out for the Contact Group meeting due to be held on Saturday, January 31.

Kiev does not put brake on anything, Alexey Makeyev said. “Contents and concrete agreements are crucial,” he said. “It is also crucial that all those who put their signatures under the documents and all those who can shoulder the responsibility would attend the meetings.”

“Tomorrow’s talks are likely to be focusing on the final document prescribing how implementation of the Minsk accords could be put back on track,” he said. “Everyone is engaged in readying the document and I am very hopeful that this meeting may take place in Minsk on Saturday.” Kiev insists on Donetsk, Luhansk leaders’ participation in peace talks on Ukraine

A senior Ukrainian foreign ministry official said the peace talks on the conflict in Ukraine’s east must be attended by leaders of the self-proclaimed Donetsk and Luhansk People’s Republics (DPR and LPR). “We’ve learned this morning that DPR and LPR have sent quite different people – Pushilin and Deinego. But we should adhere to the format we have agreed upon,” the official, Dmitry Kuleba, told journalists.

The plenipotentiary representatives of the Donetsk and Luhansk republics, Denis Pushilin and Vladislav Deinego, who arrived in the Belarusian capital of Minsk on Friday, said they had full authority to negotiate, a TASS correspondent reported from the site.

DONETSK – The self-proclaimed Donetsk people’s republic (DPR) militia have taken control of Vuhlehirsk and encircled Debaltseve, DPR deputy defense minister Eduard Basurin said. “The DPR army has fully taken the town of Vuhlehirsk under control and encircled Debaltseve. The road to Artemivsk was taken yesterday. The overall number of Ukrainian armed forces troops sealed in the trap is 8,000,” Basurin said.

Kyiv has denied Debaltseve’s encirclement, but some representatives of the Ukrainian armed forces have confirmed that the militia have taken control of Vuhlehirsk.