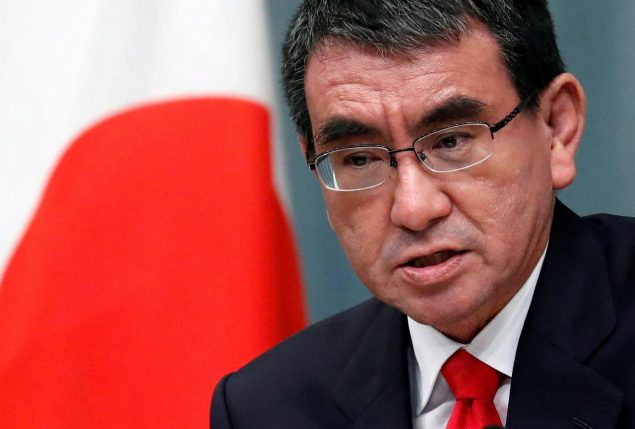 New Defense Minister Taro Kono held back on Wednesday from saying that Iran was involved in last week’s attack on Saudi Arabia’s Aramco oil plants, highlighting how Japan’s position on rising tensions in the Middle East differs from that of the United States.

“Although the relationship between Iran and the Houthi group has been under intense scrutiny in recent days, I cannot confirm that Iran was involved in the recent attacks on Saudi Arabia’s facilities,” said Kono, who was appointed to his new position in a Cabinet reshuffle just a week ago, in a group interview with multiple media outlets including The Japan Times.

In the wake of the suspected drone strikes on Saudi Arabia’s oil plants last week the U.S. was quick to point the finger at Iran, with U.S. Secretary of State Mike Pompeo writing on Twitter that “Tehran is behind nearly 100 attacks on Saudi Arabia while Rouhani and Zarif pretend to engage in diplomacy,” before calling on “all nations to publicly and unequivocally condemn Iran’s attacks.”

Chief Cabinet Secretary Yoshihide Suga has held back rather than pinning blame to any one party, saying that the government would refrain from concluding who was responsible as it was still in the process of “collecting and analyzing information” regarding the attack.

Kono claimed at a separate news conference held Tuesday that he believed the possibility that the attack was initiated by the Houthis was high, but clarified his statement at the group interview, saying that he had only said that based on the Houthis having put out a statement “claiming credit.”

He reiterated that Japan’s government had not yet “concluded” the Houthis were behind the attack. Kono added that, despite “parties such as the U.S. media claiming that Iran was involved,” the government hasn’t confirmed Tehran’s involvement either.

Iran-allied Houthi rebels in neighboring Yemen have claimed responsibility for the strikes.

Kono’s comments were made as Japan seeks to take on a mediating role, and prevent further conflict between the U.S. and Iran, amid rising tensions in the Middle East.

“Given Japan’s strong ties with the U.S. based on the U.S.-Japan Alliance, and the relationship of trust that Japan has with various countries located in the Middle East, Japan is in a position to fulfill a mediating role,” Kono said at the interview.

Tokyo has been treading carefully on the issue, with particular care not to take sides.

Abe is expected to meet both U.S. President Donald Trump and Iranian President Hassan Rouhani on the sidelines of the United Nations General Assembly, set to be held later this month, in an attempt to alleviate tensions between the two countries.

When multiple oil tankers, including one operated by a Japanese company, were attacked in June near the Strait of Hormuz, the U.S. was quick to direct blame at Iran. Washington has since asked Tokyo to consider joining its Maritime Security Initiative, a U.S.-led coalition aimed at protecting shipping vessels in the Strait of Hormuz.

“Nothing has been decided” with regards to deploying Japan’s Self-Defense Force to the Strait of Hormuz, Kono said.