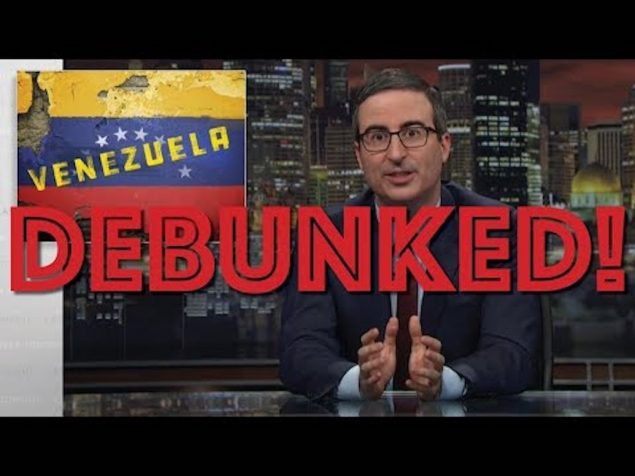 Published on YouTube last June [2018] by Empire Files producer Mike Prysner* is still remarkably relevant when it comes to the MSM pumping out negative propaganda about Venezuela.
It would appear that the team who wrote Oliver’s script either did not carry out any research, or chose to deliberately distort, mislead and/or deceive their viewers.

The week of Venezuela’s presidential election, John Oliver dedicated an ENTIRE episode of his HBO show “Last Week Tonight” to the country—full of distortions and highly misleading to progressive-minded people.

Responding to Oliver’s major points, Prysner walks us through the most glaring omissions and misrepresentations.

This video response is an essential guide for progressives to understand the reality in Venezuela, the most common myths used to discredit the Chavez movement, and the role of the US government.

[[ Prysner is an Iraq war veteran and journalist. He spent a month in Venezuela during the height of the protest movement in 2017, covering the riots and economic crisis. He has been a Venezuela solidarity activist since 2006. Watch the many documentaries and interviews he produced from Venezuela at TheEmpireFiles.tv ]]
Editors’ Note: While we don’t necessarily share the views we publish on New Cold War, we do attempt to provide readers with a range of views. This is because your right to make your own mind up depends on your being fully informed.
Share
Tweet
Share
Pin