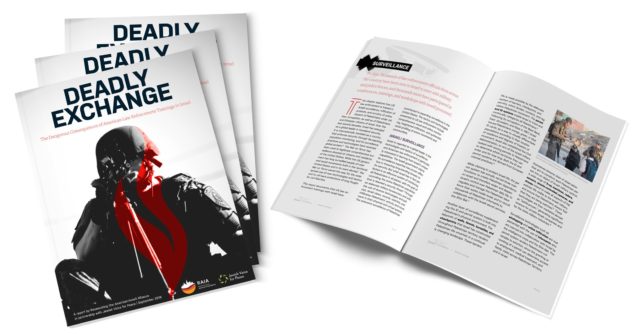 Thousands of participants in Deadly Exchange programs include ICE agents and past and current police chiefs of Atlanta, Boston, Chicago, LA, Seattle and Washington DC

This press release, originally published in September 2018, remains highly significant, particularly in light of the continuing debate over the brutal killing of George Floyd and the use of similar violence against Palestinians.

From the acting Deputy Director of ICE to the current Chief of Police in Washington DC, from San Diego to Chicago to Atlanta, since 2002 thousands of American law enforcement officials have trained in Israel with Israeli police, military and the Shin Bet. And thousands more have participated in security conferences and workshops with Israeli military, law enforcement and security officials held in the U.S. But despite their branding as top-tier counter-terrorism experts, Israeli police and security agents regularly violate civil rights, and implement racist and deadly policies.

Released today, Deadly Exchange: The Dangerous Consequences of American Law Enforcement Trainings in Israel, comprehensively documents how these trainings solidify partnerships between the U.S. and Israeli governments to exchange methods of state violence and control, including mass surveillance, racial profiling, and suppression of protest and dissent.

Produced by Researching the American Israeli Alliance (RAIA) in partnership with Jewish Voice for Peace (JVP), the report is the result of dozens of FOIAs yielding hundreds of documents, exclusive interviews with American and Israeli personnel, and exhaustive academic and media research in English, Arabic and Hebrew. Accompanying the report, RAIA released the Palestine is Here Database, a search engine mapping Israeli trainings of US law enforcement across American cities and towns.

“American police already have a terrible track record on civil rights and racism – and then they go to Israel and train with Israeli police and security agencies that are documented human rights violators! We should be investing in our communities, not militarizing our police” – Jewish Voice for Peace Deputy Director Stefanie Fox

“The dangers of U.S. law enforcement training in Israel for communities across the United States make clear that U.S. policy on Israel is not just a foreign policy issue, but one of civil rights. This unholy alliance between the U.S. and Israeli governments and American military industries is creating an injustice that we must urgently address” – RAIA Executive Director Eran Efrati

Deadly Exchange: The Dangerous Consequences of American Law Enforcement Trainings in Israel documents how these training programs contradict the heroic efforts of the civil rights movements in the U.S. to counter racist state violence – including counter-terrorism initiatives – in black, brown and poor communities.

CASE STUDY: On a police training exchange in Israel, the Boston Police Commissioner visited Ben Gurion Airport in Tel Aviv, where he learned about Israel’s passenger screening process, including racial and ethnic profiling of passengers. Shortly after, Boston’s Logan airport became the first American airport to pioneer the Israeli inspired Screening Passengers by Observation Techniques (SPOT) program. Years later, SPOT not only came under fire for being ineffective and wasteful, but also for facilitating discriminatory racial profiling at airports around the country.

The report also details the financial incentives and trade-offs between Israeli and American security firms and technologies.

CASE STUDY: Developed by Israeli police and manufactured by the Israeli company Odortec, “Skunk” is a foul-smelling liquid designed to cause nausea and linger for days when sprayed at high pressure onto protesters at demonstrations. Based on its proven effectiveness against Palestinian protests – particularly in West Bank village demonstrations against the Apartheid Wall – the American company Mistral Security began selling Skunk to U.S. police departments, including the St. Louis Metropolitan Police, following the 2014 protests in Ferguson, Missouri.

Deadly Exchange: The Dangerous Consequences of American Law Enforcement Trainings in Israel demonstrates that the U.S. law enforcement agencies’ endorsement of Israel’s use of invasive surveillance, blatant racial profiling, and brutal force as a model for policing puts us all in danger.

Stefanie Fox and Eran Efrati are available to speak with the media, along with activists on the ground

Jewish Voice for Peace is a national, grassroots organization inspired by Jewish tradition to work for a just and lasting peace according to principles of human rights, equality, and international law for all the people of Israel and Palestine. JVP has over 200,000 online supporters, over 70 chapters, a youth wing, a Rabbinic Council, an Artist Council, an Academic Advisory Council, and an Advisory Board made up of leading U.S. intellectuals and artists.

Researching the American-Israeli Alliance (RAIA) is a research organization committed to the movement for justice in Palestine in the United States, and dedicated to exposing the connections between US and Israeli state violence.