Czechs look back on 1989, a revolution betrayed

A reflection on the mythology of the Velvet Revolution, by Lukáš Rychetský and Jaroslav Fiala, translated and published in Richochet (Canada), Nov 17, 2014

Ricochet editors’ note: Twenty-five years ago today the Velvet Revolution kicked off in what was then Czechoslovakia to bring an end to the one-party government of the Communist Party. This exclusive translation of a feature from the Czech journal A2 Cultural Bi-Weekly explains that the events of 1989 were about more than just Václav Havel, a playwright and leader in the revolution who was elected president in 1990. A generation of unfulfilled promises later, Czechs are struggling to revive the spirit of not only democracy and humanism, but also socialism.

What is left of the revolutionary dreams of 1989? In the case of the Czech Republic it is first of all the superficial adoration of Václav Havel as an icon and the frustration of poor Czechs, witnesses of arrogant behaviour by mainstream media and neo-conservative elites, the self-claimed heirs of the revolution. There is something missing in the official story — the people who have experienced bitter disappointment over frustrated hopes and who see the events of 1989 as a revolution betrayed. The end of fairy tales

The revolution of 1989 exists as a great narrative in which the persecuted dissidents became revered politicians. This impression has been perpetuated by the Polish sociologist Slawomir Sierakowski. In “Vaclav Havel’s Fairy Tale,” an article published in the New York Times, he depicts Czechoslovakia’s Velvet Revolution as the tale of a political and spiritual hero’s victory over communism. In this version of the story, Havel comes to the Prague Castle as a “humble sage” in the tradition of the first Czechoslovak president, Tomáš G. Masaryk. The interpretation of the revolution as “Havel’s fairy tale” is, however, an elitist mockery of history. In it the real agents of the revolution, the ordinary Czechoslovak citizens, are missing.

What did the Czechoslovaks in 1989 really want? According to contemporary surveys, it is evident it was not capitalism. If we study the events that took place 25 years ago, we discover a much more interesting narrative.

The American historian James Krapfl, who went through archival resources, has revealed some essential information. In his book Revolution with a Human Face, Krapfl attempts to revive the memories of ordinary people. He makes clear that their main demands were democracy, non-violence, humanism and, interestingly, a more authentic socialism. The lost ideals of the revolution

In 1989, people wanted democracy guided by the motto “Nothing about us without us.” Such a system would ensure the direct participation of citizens in decision-making processes and the option of removing politicians from power when they betrayed the people’s trust. Moreover, a demand was made that socialism be reborn with guaranteed adequate pay for work and removal of privileges for the wealthy “nobility” represented at that time by the high communist officials. As pamphlets from the regions make clear, people did not want the poverty that existed in Czechoslovakia during the 1930s. The question was not whether to refuse socialism but how to build it again in a better way.

However, as shown by Krapfl, shortly after the revolution a clash broke out that has shaped our subsequent history. The revolution was taken over by a new power elite in the country’s capital, Prague. Their demands were different from those of the people in the regions. First of all, the Prague elite refused to support the presidential candidate Alexander Dubc(ek, who was a leftist and the main symbol of the 1968 Prague Spring. This occurred despite the fact he was supported by the majority of Czechs, as indicated by contemporary surveys. When the leadership of the Civic Forum, the revolutionary movement, discussed in December 1989 who should be the new president, Václav Havel’s supporters argued that the ordinary people did not know what they wanted. One of them even said, “We put [Havel’s] name into their heads and they will go for it.”

The dissidents who had become the ruling elite believed they held moral authority. After all, they had been persecuted for their beliefs and had felt socially responsible. However, what was to come in the following decades increasingly frustrated the expectations of the people. The key ideal of the revolution was humanism — no one was supposed to live in fear, be humiliated or be forced to act opportunistically. One of the revolutionary pamphlets stated, “We believe people’s opinions will no longer be manipulated and the worker will not only work but also feel, believe and think.”

After 25 years, the Czech Republic is far from these ideals. People live on a tight budget and poverty is growing. While the minimal wage in the Czech Republic is one of the lowest in Europe, foreign corporations make twice as much profit as in the Western countries. How to survive in such a system and live humanely seems to be the task for a new revolutionary movement. Dissidents were not anti-communists

People may have wanted “revolution with a human face” or even the revival of socialism, but their dreams were forgotten. And so were the leftist Czech dissidents. It is telling that today no one talks about how the dissent was inspired by the Prague Spring in 1968. And what about the political convictions of the first signatories of Charter 77 which demanded respect for human rights? Few today know that more than half of the signatories were reformist communists from the 1960s.

Memory of dissent has become like a sieve. Those born after 1989 understand the Charter 77 signatories as a group of anti-communists, as if the leftist signatories happened to be there by mistake. The world knows the name of Václav Havel. But where are the other names? The Czech elites do not take the leftist dissidents seriously despite their essential contribution to the movement. Their activities are at times even regarded as an attempt to undo the “totalitarian” transgressions of their youth, not as a continuous emancipatory fight for social justice. In 1989 no one, it appears, was interested in the leftist tradition, except for the people who jingled their keys in the squares of the Czechoslovak towns and cities. What is happening today in the Czech Republic is not so different from Havel’s absurdist plays.

On the one hand, dissent is uncritically celebrated. On the other, depicted as a group of anti-communists, the dissident movement’s politics and intellectual heritage are grossly simplified. Something similar has happened with the legacy of Václav Havel. Instead of a complex historical figure, we are left with “havelism,” that is, shallow and uncomplicated ideology celebrating all that’s pro-American.

Havel is an important component of a simplified and banal image that serves the distorted memory of the resistance. Sierakowski refers in his article to Havel’s famous essay, The Power of the Powerless (1978). He calls it a “manifesto of anti-communist dissent.” However, nothing like unified “anti-communist dissent” has ever existed in Czechoslovakia. After 1989, mainly right-wing dissidents took power, and their personal version of what happened was easily sold to the world. Their narrative resembles a fairy tale and thus is easy to understand and digest. The key transformation

Not many Czechs actively resisted the Communist regime before 1989. In contrast to Poland’s Solidarity movement, the Czechoslovak dissidents did not manage to join forces with the wider public. Still, it was not their fault. People were too afraid of police harassment to communicate with the “non-conformists.” Overnight the elite group of persecuted dissidents turned into agents of a grand historical narrative, but it took place mainly in the centre, that is, the capital, while the periphery had to pay the price.

The legacy of dissent was appropriated by the Czech right. Many of the right-wingers in the media and cultural sphere act as moral authorities, “aristocrats of the spirit,” who know very well what is best for the rest of the nation. The unquestionable moral integrity of dissidents willing to make real sacrifices has turned into the Prague elite’s vulgar belief that they stand above all others. Poor people who also had their dreams and desires are today commonly referred to as a “mob.” Due to the hegemony of the right in the public sphere, this attitude is also spreading among the more educated youth. We tend to forget that in November 1989 it was expected that Czechs would find their own way to freedom, critical of both their socialist as well as capitalist past.

The uniqueness of the Czech destiny has manifested itself in botched economic reforms and stolen state property. In place of revolutionary ideals of non-violence, truth and love, we live in a society where violence is committed against the weakest members of society. The result of neoliberal policies is chaos, cynicism, loss of solidarity and racism. The Czech support of the wars led by the West is one symptom of such violence.

Let us quote a very influential Czech weekly, which in 1999 enthusiastically defended NATO’s bombing of Serbian civilians: “Their suffering must be so great that the people themselves will force their government to surrender and to end the pointless fighting. The bombings must therefore last long enough.” From the demands for non-violence and humanism in 1989 to more violence and suffering: this seems to be the key transformation.

After 25 years, Czech society finds itself in crisis, yet the rest of the world seems not to know about it. Few listen to the concerns of ordinary people. In 1989, most of them believed that victory belonged to all. However, the narrative of the Velvet Revolution serves today to maintain the truth of a very narrow class of people who have made a new cult. The elites claim that there has never been a better time than now and never will be. It makes sense for them to say so. But we do not believe it. 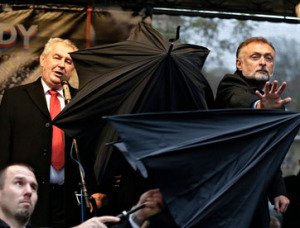 Czech Republic President Milos Zeman is pelted by protesters in Prague on Nov 17, 2014 during commemoration of the ‘Velvet Revolution’ of 1989, photo by Petr David Josek-AP

* Czechs pelt their president with eggs at Velvet Revolution anniversary, by Phillip Olterman and Associated Press, The Guardian, Monday, Nov 17, 2014

It was meant to be a celebration to mark the 25th anniversary of the Velvet Revolution, the peaceful uprising against Czechoslovakia’s communist regime in 1989. Instead, events in Prague on Monday felt more like an uprising against the current president of the Czech Republic. Milos Zeman was pelted with objects including eggs, sandwiches and tomatoes as he stood alongside with the presidents of Germany, Hungary, Poland and Slovakia at the university campus where a student rally launched the revolution in Czechoslovakia a quarter century ago.
Full article at the weblink above.

*  Communist regime was rocked by stupidity of its leadership- Zeman, by Czech News, Nov 17, 2014

Prague – The Communist regime was rocked by the incompetence and stupidity of its leadership in 1989, Czech President Milos Zeman said at a meeting on the 25th anniversary of the end of the Communist regime at the Faculty of Law today. Zeman said the heroism of the protest at Prague’s Narodni trida street in November 1989 should not be exaggerated, but he honoured those who showed courage.
Full article at the weblink above.

PRAGUE — A former left-leaning prime minister staged a big return to power Saturday by winning the Czech Republic’s first directly elected presidential vote. With all the votes counted, Milos Zeman won 54.8 percent of the vote for the largely ceremonial post, the Czech Statistics Office reported. His opponent, conservative Foreign Minister Karel Schwarzenberg, had 45.2 percent.
Full article at the weblink above.