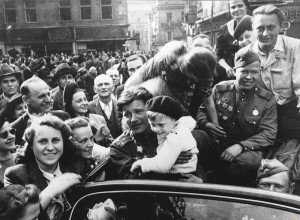 Liberation of Prague, Czechoslovakia in May, 1945. Entry of the Red Army into the city was preceded by a popular uprising

“Even the drafted version [of Yatsenyuk’s statement] did not disperse doubts that the attempt was made to revise the results of World War II,” Ovcacek said.

Earlier, Zeman criticised the Ukrainian premier calling him in one of his latest interviews “a prime minister of war”.

On January 8, Yatsenyuk told German-state broadcaster ARD: “All of us still clearly remember the Soviet invasion of Ukraine and Germany.”

“The Ukrainian prime minister, who is seeking political capital in Germany and Europe, is distorting all well-known facts, which are backed in Europe itself – in Paris, Berlin, London and in the USA”, Pushkov said.

“Nobody disputes the lawfulness of the anti-Hitler coalition’s actions. The USSR was its leading participant and it liberated Europe from Hitler, including Germany from Hitlerism,” Pushkov said.