Cutoff of Russia from SWIFT banking system is threatened

What SWIFT threats would mean for Russia

Discussions among European leaders about new sanctions on Moscow [following rebel military advances in eastern Ukraine] have again raised fears that the SWIFT international payments system might be cut off, a move that experts warn would wreak financial havoc on Russia. 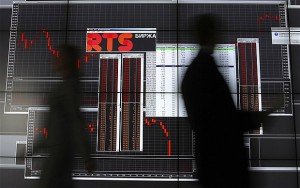 The Society for Worldwide Interbank Financial Telecommunication, or SWIFT, is a cornerstone of the world’s financial architecture and integral to the functioning of Russia’s stock exchanges and its Central Depositary, as well its banks and companies. In 2012, Western countries forced the Belgium-based payments system to cut ties with Iran, a move credited with bringing Tehran to the negotiating table over its nuclear program.

“Before SWIFT they used telexes, which are now in museums,” said Vasily Solodkov, head of the Banking Institute at the Higher School of Economics. “Russia used to use stallions and sticks as money and we could return to that, but why?” he asked.

Amid surging violence in eastern Ukraine fueled by Kremlin support for a separatist rebellion, European foreign ministers are currently considering what to include in a new round of sanctions. The new restrictions are likely to be signed off by EU leaders at a Feb. 12 summit.*

The measures under discussion include disconnecting Russia from SWIFT, according to a report in Russian newspaper Kommersant on Monday citing unnamed sources at the U.S. State Department.

Using the Belgium-based financial messaging service as retaliation against Russia for its role in Ukraine was floated last summer by Western officials and caused widespread alarm in Moscow.

In an apparent attempt to head off discussion of the topic, Russian officials have warned in recent days that any move on its membership in SWIFT would elicit a strong response.

“They have again begun discussions about restrictions on the SWIFT payment system,” Prime Minister Dmitry Medvedev told a government meeting Monday, Russian state news agency RIA Novosti reported. “If such a decision is taken our economic reaction, and reaction in other spheres, will be unlimited.”

Predictions of dire consequences were also heard from Andrei Kostin, the head of VTB Bank, Russia’s second largest lender, during the Davos economic forum last week. “It will lead to a serious deterioration of the international relationship between the East and the West,” Kostin told an audience of investors, officials and journalists Friday, according to the Russian economic news agency Prime.

He added that formal diplomatic relations between the United States and Russia could well be severed should Russia be disconnected from SWIFT.

The core of SWIFT’s work is a secure financial messaging service that communicates payment orders to be settled at correspondent accounts — accounts that one financial institution holds with another financial institution. The network has become key to the functioning of Russia’s financial system since the first bank began to use the service in 1989.

About 360,000 such messages are sent daily, making Russia the second most prolific user of SWIFT in the world, the head of SWIFT in Russia, Roman Chernov, told a conference last year, according to RIA Novosti. Over 600 Russian financial institutions use SWIFT, which saw a 40 per cent growth in its traffic in 2014, he said.

An exclusion from SWIFT would not cause the Russian financial system to break down, but it would generate severe complications, particularly with international payments, analysts said. “It will be a step backwards of 20 or 30 years,” said Sergei Grigoryan, the head of the analysis department at the Association of Russian Banks.

Domestic payments could be clumsily re-routed via the Central Bank, but there would be limited options for international payments. Over 90 per cent of the total payments currently being made by Russian banks to foreign destinations are made via SWIFT, according to Grigoryan.

Other possible options for replacing SWIFT include Internet transfers — analysts said the security risks were too high — or channeling money through accounts at foreign banks, adding an extra link in the chain of transfer.

“There are no other available systems, clients will have to open correspondent accounts with Chinese banks and work through them,” said the Higher School of Economics’ Vasily Solodkov. “Any intermediary is extra costs and extra time.”

* Any sanction by the EU against Russia requires a unanimous consent by all member countries. The new government of Greece elected on January 25 has warned the EU that it cannot assume that past approvement of sanctions against Russia by the Greek government will continue. Last summer, Britain floated the idea of cutting off Russia from the SWIFT banking payment system. Some EU countries at the time opposed that.