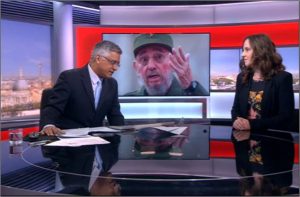 Dr. Helen Yaffe discusses the history of the Cuban Revolution on BBC on Nov 26, 2016 (BBC screenshot)

Alongside his depiction as a “brutal dictator”, negative reflections on Fidel Castro since his death on November 25 have focused on his “mismanagement” of the Cuban economy and the consequent “extremes of poverty” suffered by ordinary Cubans.

This caricature is problematic – not only because it ignores the devastating economic impact of the United States embargo over 55 years, but also because it is premised on neoclassical economic assumptions. This means that by stressing economic policy over economic restraints, critics can shift responsibility for Cuba’s alleged poverty on to Castro without implicating successive US administrations that have imposed the suffocating embargo.

This approach also ignores key questions about Cuba after the revolution. Where can medium and low-income countries get the capital to invest in infrastructure and welfare provision? How can foreign capital be obtained under conditions which do not obstruct such development, and how can a late-developing country such as Cuba use international trade to produce a surplus in a global economy which – many claim – tends to “unequal terms of trade”?

It was the search for solutions to the challenge of development that led Cuba’s revolutionary government to adopt a socialist system. They adopted a centrally planned economy in which state ownership predominated because they perceived this system as offering the best answer to those historical challenges.

But the commitment to operate within a socialist framework implied additional restraints and complications, particularly in the context of a bipolar world. My book, Che Guevara: the economics of revolution, examines the contradictions and challenges faced by the nascent revolutionary government from the perspective of Guevara’s role as president of the National Bank and minister of industries.

Literature on Cuba is dominated by “Cubanology”, an academic school central to the political and ideological opposition to Cuban socialism. Its emergence and links to the US government are well documented. Its arguments are that the revolution changed everything in Cuba – and Fidel (and then Raul) Castro have personally dominated domestic and foreign policy since, denying Cuban democracy and repressing civil society. Thanks to their mismanagement of the economy, growth since 1959 has been negligible. They simply replaced dependency on the US with dependency on the USSR until its collapse in 1990.

These ideas have also shaped political and media discourse on Cuba. But the problem with this analysis is that it obstructs our ability to see clearly what goes on in Cuba or explain the revolution’s endurance and Cuban society’s vitality.

What did Castro inherit?

Arguments about the success or failure of the post-1959 economy often hang on the state of the Cuban economy in the 1950s. The post-1959 government inherited a sugar-dominated economy with the deep socio-economic and racial scars of slavery. Cubanologist Jaime Suchlicki argues that Batista’s Cuba was “well into what Walter Rostow has characterised as the take-off stage”, while Fred Judson points to structural weaknesses in the Cuban economy: “Long-term crises characterised the economy, which had a surface and transient prosperity.” So while one side insists that the revolution interrupted healthy capitalist growth, the other believes it was a precondition to resolving the contradictions obstructing development by ending Cuba’s subjugation to the needs of US capitalism.

Following the revolution, Castro set out to bring social welfare and land reform to the Cuban people and to confiscate the ill-gotten gains of the Cuban elite. But when the defeated Fulgencio Batista and his associates fled Cuba, they stole millions of pesos from the National Bank and the Treasury. The country was decapitalised, severely limiting the capacity for public spending and private investments. Wealthy Cubans were leaving the island, taking their deposits and taxes with them. How was the new government going to carry out the ambitious socio-economic reforms without financial resources?

We have to consider these real circumstances at every juncture. For example, when the US embargo was first implemented, 95% of Cuba’s capital goods and 100% of its spare parts were imported from the US – and the US was overwhelmingly the main recipient of Cuban exports. When the Soviet bloc disintegrated, Cuba lost 85% of its trade and investment, leading GDP to plummet 35%. These events produced serious economic constraints on Cuba’s room for manoeuvre.

Putting a price on poverty

Moving on, we should also ask: how are we to measure Cuba’s poverty? Is it GDP per capita? Is it money-income per day? Should we apply the yardsticks of capitalist economics, focusing on growth and productivity statistics to measure “success” or “failure”, while paying little attention to social and political priorities?

Even factoring in its low GDP per capita, the Human Development Index (HDI) lists Cuba in the “high human development” category; it excels not just in health and education, but also in women’s participation and political inclusion. Cuba has eliminated child malnutrition. No children sleep on the streets. In fact, there is no homelessness. Even during the hungry years of economic crisis of the 1990s, Cubans did not starve. Cuba stuck with the planned economy and it enabled them to ration their scarce resources.

Yes, salaries are extremely low (as both Fidel and Raul have lamented) – but Cubans’ salaries do not determine their standard of living. About 85% of Cubans own their own homes and rent cannot exceed 4% of a tenant’s income. The state provides a (very) basic food basket while utility bills, transport and medicine costs are kept low. The opera, cinema, ballet and so on are cheap for all. High-quality education and healthcare are free. They are part of the material wealth of Cuba and should not be dismissed – as if individual consumption of consumer goods were the only measure of economic success.

The specific and real challenges Cuban development has faced has generated unique contradictions. In a planned economy, with an extremely tight budget, they have had to prioritise: the infrastructure is crumbling and yet they have first-world human development indicators. Infant mortality rates reveal a lot about the standard of living, being influenced by multiple socioeconomic and medical factors. Cuba’s infant mortality rate is 4.5 per 1,000 live births, which sits it among first-world countries – and above the US on the CIA’s own ranking.

It is not just Cubans who have benefited from these investments. Tens of thousands of Cuban doctors, educators and other development aid workers have served around the world. At present some 37,000 Cuban doctors and nurses work in 77 countries. They generate foreign exchange of some US$8 billion a year – Cuba’s biggest export.

In addition, Cuba provides both free medical treatment and free medical training to thousands of foreigners every year. As a direct initiative of Fidel, in 1999, the Latin American School of Medicine was inaugurated in Havana to provide foreign students from poor countries with six years of training and accommodation completely free. In 2004, Cuba teamed up with Venezuela to provide free eye surgery to people in three dozen countries under Operation Miracle. In the first ten years more than 3m people had their sight restored.

Prohibiting even trade in medicines, the US embargo led Castro to prioritise investments in medical sciences. Cuba now owns around 900 patents and markets pharmaceutical products and vaccines in 40 countries, generating yearly revenues of US$300m, with the potential for massive expansion. The sector produces more than 70% of the medicines consumed by its 11m people. The entire industry is state owned, research programmes respond to the needs of the population, and all surpluses are reinvested into the sector. Without state planning and investment it is unlikely that this could have been achieved in a poor country.

In the mid-1980s Cuba developed the world’s first Meningitis B vaccine. Today, it leads in oncology drugs. In 2012 Cuba patented the first therapeutic cancer vaccine. The US embargo forces Cuba to source medicines, medical devices and radiology products outside the United States, incurring additional transportation costs.

A great example provided by Cuba is that in its poverty it has known how to share, with all its international programmes. Cuba is the country with the greatest cooperation in relation to its gross domestic product and it is an example for all of us. This doesn’t mean that Cuba doesn’t have big problems, but it is also certain that it is impossible to judge the success or failure of the Cuban model without considering the US blockade, a blockade that has lasted for 50 years. Ecuador wouldn’t survive for five months with that blockade.

Let’s consider the embargo: the Cuban government estimates that it has cost the island US$753.69 billion. Their annual report to the United Nations provides a detailed account of that calculation. That’s a lot for a country whose average GDP between 1970 and 2014 has been calculated at US$31.7 billion.

Yes, Castro presided over mistakes and errors in Cuba’s planned economy. Yes, there is bureaucracy, low productivity, liquidity crisis, debt and numerous other problems – but where aren’t there? Castro pointed to these weaknesses in his own speeches to the Cuban people. But President Correa is right – to objectively judge Castro’s legacy, Cuban development and contemporary reforms today, we cannot pretend that the US blockade – which remains today despite rapprochement – has not shaped the Cuban economy.

Castro almost saw out 11 US presidents since 1959, but he never lived to see the end of the US embargo. New challenges face Cuba, with economic reforms underway and the restoration of relations with the United States. Next week, I will begin new research in Cuba to assess the revolution’s resilience in this post-Castro, Donald Trump era.

Dr. Helen Yaffe is the author of Che Guevara: The Economics of Revolution (Palgrave Macmillan, 2009) and a specialist on Cuban and Latin American economic history. She is a Fellow in the Economic History Department at the London School of Economics. She has spent several years living and researching in Cuba. Here is a June 2009 essay by her on the occasion of the publication of her book on Che Guevara.

Watch a four-minute interview with Helen Yaffe on Britain’s Sky TV on Nov 27, 2016: