By William Blum, published in his Anti-Empire Report (monthly), November 2016

‘While others may call Cuba’s security policies dictatorship, I call it self-defense.’ 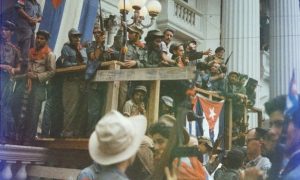 The most frequent comment I’ve read in the mainstream media concerning Fidel Castro’s death is that he was a “dictator”; almost every heading bore that word. Since the 1959 revolution, the American mainstream media has routinely referred to Cuba as a dictatorship. But just what does Cuba do or lack that makes it a dictatorship?

No “free press”? Apart from the question of how free Western media is (see the preceding essays in this issue of Anti-Empire Report), if that’s to be the standard, what would happen if Cuba announced that from now on anyone in the country could own any kind of media? How long would it be before CIA money – secret and unlimited CIA money financing all kinds of fronts in Cuba – would own or control almost all the media worth owning or controlling?

Is it “free elections” that Cuba lacks? They regularly have elections at municipal, regional and national levels. They do not have direct election of the president, but neither do Germany or the United Kingdom and many other countries. The Cuban president is chosen by the parliament, The National Assembly of People’s Power. Money plays virtually no role in these elections; neither does party politics, including the Communist Party, since all candidates run as individuals. Again, what is the standard by which Cuban elections are to be judged? Is it that they don’t have private corporations to pour in a billion dollars? Most Americans, if they gave it any thought, might find it difficult to even imagine what a free and democratic election, without great concentrations of corporate money, would look like, or how it would operate. Would Ralph Nader finally be able to get on all 50 state ballots, take part in national television debates, and be able to match the two monopoly parties in media advertising? If that were the case, I think he’d probably win; which is why it’s not the case.

Or perhaps what Cuba lacks is our marvelous “electoral college” system, where the presidential candidate with the most votes is not necessarily the winner. Did we need the latest example of this travesty of democracy to convince us to finally get rid of it? If we really think this system is a good example of democracy why don’t we use it for local and state elections as well?

Is Cuba a dictatorship because it arrests dissidents? Many thousands of anti-war and other protesters have been arrested in the United States in recent years, as in every period in American history. During the Occupy Movement of five years ago, more than 7,000 people were arrested, many beaten by police and mistreated while in custody. And remember: The United States is to the Cuban government like al Qaeda is to Washington, only much more powerful and much closer. Virtually without exception, Cuban dissidents have been financed by and aided in other ways by the United States.

Would Washington ignore a group of Americans receiving funds from al Qaeda and engaging in repeated meetings with known members of that organization? In recent years, the United States has arrested a great many people in the U.S. and abroad solely on the basis of alleged ties to al Qaeda, with a lot less evidence to go by than Cuba has had with its dissidents’ ties to the United States. Virtually all of Cuba’s “political prisoners” are such dissidents.

While others may call Cuba’s security policies dictatorship, I call it self-defense.

William Blum is an author, historian, and renowned critic of U.S. foreign policy. He is the author of ‘America’s Deadliest Export: Democracy’ (2013). See a list of his published books here on his website.