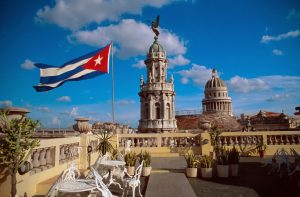 Dr. John M. Kirk of Dalhousie University in Halifax, Nova Scotia looks at Cuba’s future in an interview broadcast on CBC Radio One on November 28. The interview examines how Cuba’s socialist revolution has continued to evolve and adapt since 2008 when Fidel Castro stepped down as president of Cuba. Dr. Kirk is asked what will change in Cuba, if anything, following the passing of the country’s historic leader and revolutionary icon.

John Kirk is a professor in the Department of Spanish and Latin American Studies at Dalhousie University. He has traveled extensively to Cuba over his many years of research and writing on that country. He is the author of Health Care without Borders: Understanding Cuban Medical Internationalism, published in 2015 by the University Press of Florida.

The interview with John Kirk aired on ‘On The Coast’, the afternoon radio program of CBC Vancouver. Go to the program website, then click on the podcast for November 28. The interview begins at the two hour, six minute mark and lasts for seven minutes. (With apologies for the words of the CBC program interviewer who introduces the interview by parroting that Fidel Castro was a “dictator”.)

Two letters to the Globe and Mail, published in the print edition of Nov 29, 2016:

Fidel Castro was a controversial figure, but the dancing in the streets of Miami by exiles, and superficial tweets by Conservative hopefuls showing selective indignation, are disappointing.
– Dr. John M. Kirk, Professor in Latin American Studies, Dalhousie University, Halifax

2. While the substance of Clifford Orwin’s column (Why Is Justin Trudeau coddling the Castros? – Nov. 28) is well taken, one should be careful not to overstate the case against Justin Trudeau’s assessment of the Cuban model under Fidel Castro.

Professor Orwin suggests Cuba’s neighbours have prospered to a greater degree than the island nation since the revolution of 1959. Yet, we need only look to Haiti – some 100 kilometres away – for a liberally oriented form of political and economic development that by most reasonable indicators has been, for decades now, mired in a startling humanitarian tragedy. A level-headed appraisal of Mr. Castro’s record will need to come to terms with the reasons for the stark contrast in human development between these two otherwise similarly situated countries.

Certainly we in our liberal countries have something to learn from Cuba, just as we hope to offer Cubans our insights in return.
– Patrick Desjardins, PhD candidate, political science, York University, Toronto