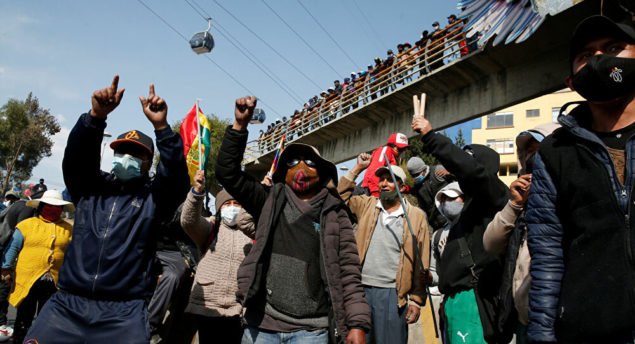 These are critical hours in Bolivia. The protests have been going on nationally for more than a week; the de facto government has deployed police, military and armed civilian groups. The escalation has not ceased and the demand for Jeanine Áñez’s resignation has been established, but what will be the consequences?

Bolivia is living through critical hours again. The roadblocks that began on 3 August and the violence deployed by the de facto government have multiplied in actions and statements: repression, military deployments, armed civilian groups. “Shooting would be the politically correct thing to do,” said Arturo Murillo, Minister of Government.

Bolivia's Interior Minister on the protests: "shooting people would be politically correct".

These are the kind of psycopaths that have governed since the coup. They never won an election, but the US imposed them on us anyway. pic.twitter.com/a1n7gepKp0

The protests were triggered by the third postponement of the presidential elections by the Supreme Electoral Tribunal (TSE), which changed the voting day from 6 September to 18 October and, in the event of a second round, to November 29.

This decision sparked a mobilization on July 28, led by the Central Obrera Boliviana (COB) and different social sectors mobilized, self-convened, indigenous and peasants. That day, from El Alto, Juan Carlos Huarachi, COB’s secretary general, announced that he was giving the TSE 72 hours to retreat and maintain September 6.

On Monday, August 3, given the lack of agreement, the protests and blockades began and the main points of the country, such as the departments of Santa Cruz, Cochabamba, Oruro, the city of El Alto and La Paz, where a hunger strike was also initiated in front of the TSE.

The initial request was that the date of September 6 be maintained or that there be elections with guarantees before October 18. As the days went by, the demand began to be oriented towards the resignation of Jeanine Añez who, in addition to being in the presidency due to the coup d’état – which, according to her, she would only occupy for ninety days – is also a presidential candidate.

It is an extremely weak government from which the popular sectors are demanding her resignation for having impoverished Bolivian families, for not guaranteeing minimum conditions to face the health crisis and for depriving them of fundamental rights such as access to education,” explains Adriana Salvatierra, senator for the Movement Towards Socialism (MAS).

The de facto government has been weakened and this process is behind the postponement of elections. Not only has the image of Añez or Fernando Camacho, who was part of the coup leadership in October/November, fallen, but the polls give preference to Luis Arce, the presidential candidate for MAS along with David Choquehuanca.

The weakness, a product of the lack of original legitimacy, aggravated by the massacres carried out in Senkata and Sacaba shortly after the coup, has been accentuated over the months. The arrival of the pandemic, the accusations of corruption, and the insufficient response from the beginning to date have been a central exacerbating factor.

For almost two months there have been no basic medicines such as azithromycin, aspirin and others, medical oxygen is scarce, COVID-19 tests have been scarce for five months, hospitals have collapsed for three months,” explained Freddy Morales, Telesur correspondent from La Paz.

The pandemic has been put forward as a reason to postpone the elections from May 3 to August 2 to September 6 and October 18. However, in view of the country’s political crisis, a further postponement would require a dialogue with all political sectors in order to reach an agreement.

Since this step was not taken, the organizations decided not to come to an agreement when the protests were announced, and in view of the accumulated discontent along with the rejection of Añez, the blockades began.

The responses of the de facto government were as expected: threats, criminalization of the blockades, a national dialogue without the main actors, and the reappearance of armed civilian groups that acted during the escalation of the 2019 coup.

They are groups that use violence, in many cases armed, in complicity with the current state authorities, especially the police, display equipment such as bulletproof vests and low-calibre weapons and act with impunity by attacking popular sectors that protest against the de facto government,” explains Edmundo Juan Nogales Arancibia, a lawyer and analyst.

These groups played a central role in 2019 by acting with force first in Santa Cruz, then in Cochabamba, and finally in La Paz. In those weeks they attacked mobilizations that defended Evo Morales, attacked women in the streets for being indigenous, assaulted houses of MAS leaders, kidnapped their relatives, as well as the mayor of the municipality of Vinto, who was beaten, her hair cut and then painted red.

The first resurgence took place in La Paz, when the so-called Cochala Youth Resistance attacked those who were carrying out the hunger strike in front of the TSE. Their performance was repeated in Cochabamba, and in Santa Cruz the Cruceñista Youth Union (UJC) took action.

They are an operative arm that allowed the current de facto government to take power and which they help to preserve by attacking mobilized social sectors that are demanding national elections. They are spreading throughout the country under the name of ‘Resistance’, adding the adjectives ‘youth’ and the region where they want to be installed”, explains Nogales.

The oldest of these formations is the UJC – founded in 1957 – which acted with force in the 2008 coup attempt, “a paramilitary organization of the Bolivian oligarchy, racist, separatist and anti-communist,” as journalist Nicolás Lantos describes it in his investigation.

That 2008 attempt had among its main leaders Branko Marinkovic, a businessman from Santa Cruz, who fled the country after the failure of that plan, and his involvement in an operation to assassinate Evo Morales in which five Europeans linked to neo-Nazi groups were implicated.

Marinkovic, who sponsored Camacho – formed in the ranks of the UJC – was part of the articulation of the coup against Morales from abroad, and returned to Bolivia in January. He was appointed Minister of Planning of the de facto government on Wednesday, August 5, two days after the start of the blockades and protests.

The actors in the 2019 coup d’état were heterogeneous, but they formed what Salvatierra calls “the November bloc” organized to overthrow the government of Evo Morales.

After the coup, the actors in this bloc “returned to their political-electoral strongholds, but the candidacy of Jeanine Añez, who violated the principles of a ‘transitional government’, and Camacho’s electoral adventure, further fragmented the opposition to MAS.

The anti-MAS coup goal was thus divided into different candidates: Añez, Camacho, Jorge Quiroga and Carlos Mesa. Of this group of actors, Mesa, who had been the main candidate against Morales, is the one who maintains the greatest number of votes among these candidates: 26.8%, according to the survey carried out by the Latin American Strategic Center for Geopolitics in July. Arce, on the other hand, has 41.9% voting intention.

Marinkovic’s entry into the de facto government could mean a possible unity between Añez and the sector headed by Camacho, although he discursively maintains critical positions against her and Murillo. Camacho, in the face of the blockades, again deployed armed groups, as he announced and later proclaimed on his own social networks.

But both Añez, Camacho, Mesa, and the coup-plotting arch have two central points of agreement: preventing the return of MAS to the government and the economic model imposed after the overthrow of Evo:

What unites all of these factions is their implicit agreement to impose a neoliberal economic agenda embodied in Supreme Decree 4272 that establishes the reduction of the State in the economy, the privatization of state enterprises, reduction of public spending, reduction and precarization of employment,” Nogales analyzes.

The escalation of the crisis

On Tuesday, August 11, at noon in the city of El Alto, the town council ratified the demand for Añez’s resignation. The request, which is spreading through various sectors and protests, is, however, complex in its political consequences.

If we are going to go for overthrowing this government, as the comrades say, ‘out with Añez’, which government is going to come in? I think that this reflection has to be made, as quickly as possible, overthrowing Añez would imply a new transitional government that would have to call new elections, and therefore, that would imply a longer period of uncertainty until we have a democratic and legitimately elected government,” said Arce.

Arce’s call for reflection was addressed to those leading the protests. The protests, in which the COB, the Unity Pact and different mobilized sectors are participating, are not being led by MAS.

On August 10, Morales called on “the leaders and mobilized people” to consider a draft proposal for a Memorandum of Understanding, “worked on by social organizations and the TSE, with the United Nations as a witness, “so that October 18 will be, by law, a definitive, non-deferrable and immovable date for elections”.

I call on social leaders and mobilized people to consider the draft proposal of the Memorandum of Understanding worked out by social organizations and @TSEBolivia, with the United Nations as a witness, so that October 18th will be, by law, a definitive, non-deferrable and immovable date for elections pic.twitter.com/jpp7M6u2pi
– Evo Morales Ayma (@evoespueblo) August 10, 2020

The challenge, at this critical moment, is for MAS to reach an agreement with respected guarantees, and to avoid an even greater escalation that could lead to more armed civilian confrontations, as well as new massacres by the de facto government with the police and military forces, as happened in November.

There is another scenario at play, also denounced by Arce and Morales: a plan for a “military self-coup to take power beyond the constitutional order”. What agreements exist within the military fractions to lead an action of this nature? What support would it have from the U.S. embassy? Or is it being developed from the embassy?

On the evening of 10 August, on a programme on the US channel CNN, presenter Fernando Del Rincón, besides praising the right-wing armed groups, urged Murillo to deploy the military to the streets to bring order, as the blockades were “a war crime “. That was when Murillo stated that “shooting would be the politically correct thing to do” and that their “hours were numbered” to “avoid a civil war”.

For the moment, the escalation is not about to stop. Could a decision by the TSE to bring the elections forward and set an earlier date than October 18 stem it? Two members of the TSE raised the need to reconsider the date on Tuesday 11 in view of “current events of social conflict that tend to worsen every day”.

On Monday, October 10, the Attorney General’s Office announced that it had accepted the complaints against Morales, Arce, Choquehuanca and Huarachi to investigate them for terrorism. The attempt to achieve elections with guarantees is facing not only postponements, but also persecutions and attempts to outlaw them.

The continent and the world are witnessing an attempt by a coup d’état to remain in political power. As in the days of the overthrow, most of the mainstream media oscillate between ignoring the coup dimension of Añez and equating actors, or, like CNN, openly supporting the coup leaders. A similar pattern has been observed at the diplomatic levels.

"This committee will not rest until these human beasts, who are wrongly called 'citizens', are behind bars". pic.twitter.com/8vVATyWVAG

"They'll know what to do…they need to send a message to Bolivia" pic.twitter.com/FLyQS4Gl8R

Day 8 of Bolivia's blockades to restore democracy comes to an end. Here's a summary with info from @FreddyteleSUR: