1. Crimean Tartars are returning to Crimea from Ukraine

The Vice Prime Minister of the Republic of Crimea, Ruslan Balbec, has revealed statistics about the departure and subsequent return to the Crimean Peninsula of the Crimean Tatar population.[1] 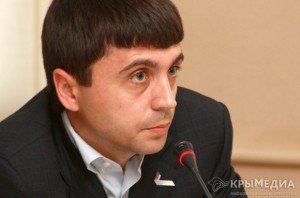 Ruslan Balbec, Vice Premier of the Crimean Republic of the Russian Federation

More than half of the Crimean Tatars who left the Peninsula from Ukraine after the referendum in March 2014 have returned, reports the news agency RIA Novosti, with reference to Mr. Balbec.

According to him, from 600 to 800 Crimean Tatars left Crimea after its decision in 2014 to join the Russian Federation. This included students at Ukrainian universities who wanted to finish their education programmes.

The vice-prime minister noted that the returning Crimean Tatars are asking his office for assistance in finding employment. He says they are disappointed with the prospects for life in Ukraine.

Prior to the meeting of the World Congress of Crimean Tatars in Ankara, Turkey, which took place last weekend, the head of State Committee for Interethnic Relations and Deported People of the Crimean Republic, Zaur Smirnov, cited similar data, that some 800 people had left Crimea. Others at the Congress talked of 15,000 Crimean Tatars who had left the peninsula.[2]

Notes by New Cold War.org:
[1] Ruslan Balbec, the Vice Prime Minister of the Republic of Crimea, is a Crimean Tatar by ethnicity.
[2] The so-called ‘World Congress of Crimean Tatars’ was hosted by the Turkish government, in collaboration with the governing regime in Kyiv and the small number of Tatar supporters of Kyiv who are living in Ukraine. Here is a brief news report of that gathering. And here is a brief report of the one-hour meeting on August 3 between several, older Tatar supporters of Kyiv and President Recep Tayyip Erdogan of Turkey. Erdogan is reported to have pledged the “steadfastness and immutability of Turkish policy with regard to aggression against Ukraine and liberation of Crimea from occupation”.

2. Crimean Tatars are moving to Crimea from Kherson oblast in increasing numbers, escaping from the anti-terrorist operation

SIMFEROPOL–Large numbers of Crimean Tatars living in the Kherson oblast of Ukraine are moving to Crimea in order to avoid being drafted into the Ukrainian armed forces and its so-called “anti-terrorist operation” in the east of Ukraine, the deputy chairman of the Council of Ministers of the Republic of Crimea, Ruslan Balbek, reported during a Simferopol-Moscow video conference devoted to Deportation Remembrance Day.[1]

“Today these people are actively coming back, seeing the difference between the situation in Russian Crimea and what is happening today in Ukraine. Those Crimean Tatars who are returning or speaking or speaking about a desire to return are living in the territory of the Kherson oblast.

“These are mainly young men escaping from participation in the anti-terrorist operation,” the Deputy Prime Minister stated.

In addition, according to Mr. Balbek, parents of young Crimean Tatars living in the Kherson oblast are appealing to Crimean authorities for assistance in establishing a committee of Crimean Tatar mothers.

“This committee will appeal to international human rights institutions to prevent the mass drafting of Crimean Tatar youth living in the Kherson district into the Ukrainian armed forces”, he explained.

According to the chairman of the State Committee for Interethnic Relations and Deported People of the Crimean Republic, Zaur Smirnov, the real number of Crimean Tatars who left Crimea for Ukraine after the reunion with Russia is ten times lower than the figures cited by leaders of the Tatar Mejlis, Mustafa Dzhemilev and Refat Chubarov.

“No more than 600-800 people left from Crimea to the territory of Ukraine in 2014. This is mainly students, not yet graduated from higher education institutions and still at the crossroads of their learning. There were also those people who decided to leave for political and ideological reasons.

“The figure of 20,000 cited by Dzhemilev and Chubarov is astronomical. They are focused on one thing only–the higher the numbers they utter, the higher will be the fees they are paid for their work,” Smirnov emphasized.

Note:
[1] May 18 is recognized in Crimea and Russia as Deportation Remembrance Day, marking the date in 1944 when the forced dislocation of the Crimea Tatar population was undertaken by the then-government of the Soviet Union.

3. Concerning publications in certain Turkish media outlets regarding the visit by an unofficial Turkish delegation to the Republic of Crimea in the Russian Federation

By the Ministry of Foreign Affairs of the Russian Federation, June 2, 2015

Following a visit by an unofficial Turkish delegation to Crimea on April 27-30, we would like to note the comments that it has generated in the Turkish media. We have to say that of late, there have been increasing attempts to use the Crimean Tatar people as a tool in the unfair criticism of the Russian authorities’ efforts in the Republic. There are constant allegations of “mass abductions of Crimean Tatars” and “numerous illegal searches and arrests of Crimean Tatar activists” on the peninsula.

We know how attentive the Turkish side is toward the status of Crimean Tatars. In this context, the Crimean authorities have done all they can to ensure that the unofficial delegation from Turkey receive the fullest possible and most objective information about the life of the Crimean Tatar people today.

On the whole, we positively assess the delegation’s visit to the peninsula. We believe that such meetings help dispel propaganda myths and artificial stereotypes which distort the actual situation of Crimean Tatars. For our part, we call for an objective, non-politicised approach to this issue.

Work is underway on the peninsula to establish the full ethnic-cultural autonomy of the Crimean Tatar people, which was difficult to imagine during the “Ukrainian period.” Crimean Tatar has been recognised as an official language of the Republic of Crimea, on par with Russian and Ukrainian. Meanwhile, the Crimean Tatars’ priorities do not lie in a politicised domain but have a clear socio-humanitarian and economic character, related to the legalisation of land plots, agrarian issues, raw materials, and the cultural development of the Crimean Tatar community.

We are certain that the Turkish delegation, which visited Crimea, had a good opportunity to see this for themselves.