COVID-19 and the immediate need for a universal basic income 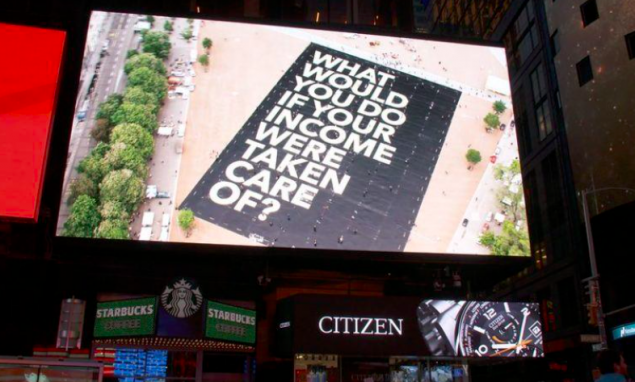 A basic income of an amount equal to or above the poverty line in every country would guarantee the material existence of the whole population, respecting the dignity of everyone because this isn’t “help” but a right guaranteeing social existence.

Apart from the medical threat revealing a brutal class divide in healthcare, the coronavirus pandemic is creating social and economic havoc among non-rich populations. If ever the need for a universal basic income was evident, it is now. But governments, trying to save the neoliberal system, and making the most of the disaster to lay the foundations for a new round of disaster capitalism, won’t see it. To give a couple of examples of this catastrophe profiteering, laissez-faire entrepreneur par excellence, Sir Richard Branson, wants a £7.5 billion government bailout for his airline, and Trump has proposed a $700 billion stimulus package in which industries will be “stimulated” at the expense of Social Security and, once again, the poor. So much for the free market.

Many countries, mostly in Europe, have taken extraordinary, unprecedented measures, including closed borders. Perhaps the closest case for comparison with the present situation would be the “Spanish” flu (which didn’t start in Spain but probably in Fort Riley, Arkansas, or a British army base in France or, as a third hypothesis ventures, northern China in late 1917). Wherever it started, it affected a third of the world’s population with death rates, depending on the zones, of between 10% and 20%. By the end of the pandemic in 1920, more than forty million people had died. It is thought that the coronavirus will be just as dangerously active till the beginning of summer, at the earliest. So, it still has at least three months to do its damage.

A drop of between 2-3% in the world GDP (which is the definition of a recession), is expected because of the economic situation prior to the onset of COVID-19 and the chaos it is presently causing. Most of the world’s non-rich population hasn’t recovered its living conditions from before the crisis of 2008, and now it is being battered by another kind of crisis. Naturally, the very rich will lose too. According to Fortune, March 10 was the worst day of decline in a decade for DOW, S&P 500, and NASDAQ. When the New York stock exchange opened on 16 March, Dow Jones dropped 9.7% (more than 2,250 points) and S&P dropped 8%. The plummeting of global stocks in the past few weeks has been as fast as any downhill run in history. And they’ll also lose when their airlines and factories close. But losing for the rich isn’t the same as losing for the poor. The rich aren’t losing the conditions of their social existence, they’ll have good medical care, can hide away in their bunkers and, around the world, they have the power to mitigate their losses, so they’re wasting no time in calling for tax breaks and looking for legal loopholes to make it easier to sack workers. The millions of people who can’t work because of the virus, provisionally or in the long term, won’t only suffer “losses” but the material conditions of their existence will be in jeopardy. This means extreme vulnerability that will make them more susceptible to the virus because, for example, they can’t even attain the basic conditions of hygiene prescribed by the WHO.

The EU’s response to the crisis of 2008 was to impose “austericidal” measures which afflicted whole states like Greece, and all vulnerable populations. Now, with the pandemic, it seems that these measures, whose dire effects have become so obvious and well-known, won’t be applied. There’s not much coordination on this side of the world. For example, the Spanish government has announced that it will take public control of Spain’s private health providers and their facilities to cope with the virus while the free-marketeering UK government is coughing up £2.4 million a day for private hospital beds. However, coherent, public, and universally applicable economic and social measures are being vigorously pushed, though not by governments. In particular, activists from social movements and left-wing media are calling for basic income, an unconditional monetary payment to the whole population.

In many states, people are strictly confined to their homes and can only go out in exceptional conditions, like food and pharmacy shopping. This means loss of jobs or freelance work and tremendous economic anxiety. If the US Constitution is any example, western liberal governments are supposed to establish justice, ensure domestic tranquility, provide for the common defense, promote general welfare, and guarantee the rights of freedom. They’re failing on all counts and, one might almost say, doing the opposite, as well as adding insult to injury by mass surveilling their populations and lying to them about public concerns. We, the people, can’t count on them but must insist on measures that will strengthen our rights and ability to prevent further abuse. A universal basic income would be a very good start because it would bolster social existence.

This isn’t charity, or aid, or a temporary second-best solution waiting for better days. It’s a human right, the one right on which all other rights depend: the right of material existence. People who don’t have this right can’t be free because they’re dependent on others for their social existence. It’s not a form of conditional benefits either, something to be pleaded for, or only obtained when you prove to some bureaucrat that you’re worthy, a handout with a special ex post logic of only helping “failures” after they’re on their knees. These people who are made to beg have “failed” because they are long-unemployed or are working in conditions that put them under the heading of the working poor, which is the case of 15% of Europe’s wage workers, and other reasons that are products of the system itself. Conditional benefits are better than nothing, but they’re offered as a slender lifeline to a very small fraction of the truly needy population because of insufficiency, inefficiency, and the downright poverty of the benefits that are allegedly combating poverty. People in desperate situations are humbled into being subservient supplicants, begging for “benefits”. COVID-19 has only made this situation crueler for growing numbers of people.

A basic income of an amount equal to or above the poverty line in every country would guarantee the material existence of the whole population, respecting the dignity of everyone because this isn’t “help” but a right guaranteeing social existence. The pandemic, literally a life-and-death matter, has made this measure even more urgent. Governments are seized by attacks of the vapors when contemplating the “cost” of such a measure but there are detailed studies showing how it can easily be financed, basically by a stronger taxation system in which the rich would pay more in taxes than they would receive as a basic income. And let nobody say this is unfair to the rich when one third of the world’s GDP is stashed away in tax havens. What matters is that paying this “cost” of the material and social existence of whole populations should be a top priority in the crisis we are all now facing. And if the social benefits of this were weighed against the so-called “cost” (to the rich who, scrambling for their bunkers, are showing just how antisocial they are), could we even talk about a cost?

By the way, what would be the social cost of not introducing an unconditional universal basic income now?

Daniel Raventós is a lecturer in Economics at the University of Barcelona and author inter alia of Basic Income: The Material Conditions of Freedom (Pluto Press, 2007). He is on the editorial board of the international political review Sin Permiso.

Julie Wark is an advisory board member of the international political review Sin Permiso. Her last book is The Human Rights Manifesto (Zero Books, 2013).