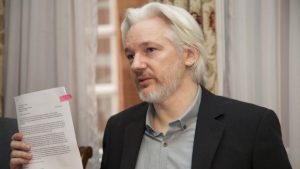 WikiLeaks has dismissed a wordy article by the New York Times suggesting that leaks by founder Julian Assange may have benefited Moscow or come from “Russian intelligence.” The claims are “false” and “impute conspiracy”, the website states.

The article, published in the New York Times on Thursday, claimed that “the agendas of WikiLeaks and the Kremlin have often dovetailed,” and that the majority of Julian Assange’s revelations had an anti-American and slightly pro-Russia bias.

Without citing reliable proof, the newspaper went on to speculate that Assange could have received Democratic Party documents – leaked earlier this year – from Russian intelligence.

Wondering if the website has become a “laundering machine for compromising material gathered by Russian spies,” the NYT said it comes into conflict with WikiLeaks’ initial policy to fight “oppressive regimes” in China, Russia and Central Asia.

“The only hard news in the article is that ‘American officials say Mr. Assange and WikiLeaks probably have no direct ties to Russian intelligence services’,” Wikileaks responded in a statement on Thursday.

Some 20,000 Democratic National Committee (DNC) emails were released by WikiLeaks in July, revealing that the party had conspired with Hillary Clinton’s campaign to undermine her principal rival, Senator Bernie Sanders.

Certain U.S. officials were quick to say that Moscow may have been behind the leak, allegedly carried out to favor Republican frontrunner Donald Trump.

“The various hacks of the DNC over several years are not the same matter as WikiLeaks’ publication of leaked emails and it is misleading to suggest otherwise,” the statement reads.

The NYT also referred to the WikiLeaks founder as an uneven “sympathizer” of Moscow fighting “Western imperialism”, listing his cooperation with Russian media and an alleged desire to relocate to Russia and set up a WikiLeaks base there.

The WikiLeaks’ statement rejected this notion, saying: “WikiLeaks has published more than 650,000 documents about Russia and President Putin, most of which is critical.”

“It is false that Mr. Assange ‘muse[d] to associates about relocating’ to Russia. He openly joked in a press conference about how absurd it would be if a Western press freedom activist would be forced to seek asylum in Cuba.”

Other claims by the NYT, such as Assange’s “decidedly pro-Russian view of hostilities in Ukraine” and being “silent about some of the Russian president’s harshest moves” have been dubbed “absurdly false” by WikiLeaks.

The NYT claimed that Assange was a “master of timing,” claiming that WikiLeaks revelations emerged online simultaneously with international events essential for Russian policy.

“The conspiracy theory the article attempts to impute about the timing of WikiLeaks publications is false and is not journalism,” WikiLeaks stated in conclusion.